Chakra Cosmic Thanka is also called as Kundalini Thanka. Finely painted thangka with the 7 chakras of the human body.

This Thangka painting was traditionally used as teaching aid to show the seven major Chakras of the human form according to the Kundalini Yoga.

Finely painted thangka with the 7 chakras of the human body. With various color patterns and symbolism, standing on a lotus flower with white/golden lettering in the background with specific instruction. Thanka shows the various energy channels open and in perfect harmony at the stage of enlightenment. Buddha Enlightened, experiencing Universal Consciousness, we can sense the flow of his energy as he channels the pure knowledge of the Awakened mind. The enlightened one resting upon a lotus as a symbol of their purity of body, mind, and speech. He stands upon two golden fish on a lotus flower amid the Windhorse, which is an allegory for the human spirit, analogous to Qi or, the life force.

The painting depicts many of the body’s chakra energy points including the central seven chakras and the Kundalini energy, shown as a coiled snake, waiting to spring upwards irresistibly through the energy channels. His hands are open in meditation to channeling vibrational energy in the graceful gesture of charity known as the Varada mudra and he is wearing a simple yet vibrantly patterned dhoti or robe around his lower body.

The Buddhas yogic subtle nervous system is open and flowing with kundalini energy which flows like a cool wind through the bodies seven chakras with irresistible force. The upper-most Sahasrara chakra is open, displaying it’s symbolic 1000 petal lotus form, connected by the three energy channels which flow between the system of chakras when Awakened and having reached complete enlightenment or Buddhahood.

The Chakra system consists of seven main chakras which rise from the base of the spine up to the top of the head. These are known as – (from the base chakra upwards): Mooladhara, Swadhisthana, Nabhi, Anahat, Vishuddhi, Agnya, Sahasrara.

The black background is symbolic of the tantric mysticism contained in the knowledge behind enlightenment, the painting reveals the sense of the energy and joy experienced through the achievement of spiritual ascent.

Be the first to review “Chakra Cosmic Thangka” Cancel reply

27
May
2019
Chakras, Mantra, Meditation, Symbols, Yoga sadiksha
The Throat Chakra is the fifth chakra, also known as the Vishuddha Chakra, is the energy center located between the collarbones and the larynx in the neck. There are seven major chakras in the internal system of the human body that align the flow of our prana (energy). If one of the chakras is imbalanced, it can cause illness or disease. Yoga, meditation, and mantras can assist with chakra imbalances and blockages. The Throat Chakra is associated with .
Read More 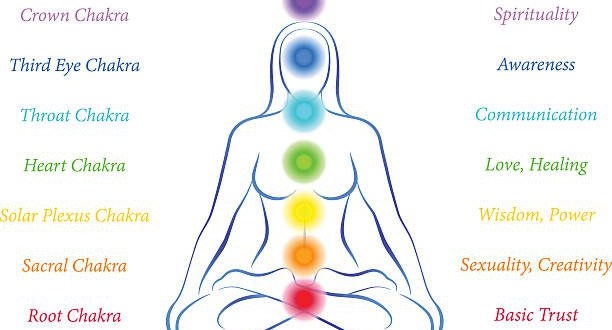 31
Jan
2018
Chakras, Healing Himalayas Life
The Chakra is a Sanskrit word meaning wheel or a circle. It is the center of the energy, the focal point from where energy flows. It is believed to be the life force or prana that constantly moves inside us. History The earliest appearance of the Chakra is found in Vedic literature, in the Hindu scripture. Not to get confused with energy centers, it first appeared as Chakravartin or the king who “turns the .
Read More