The 7 Chakras and the Healing Power within us 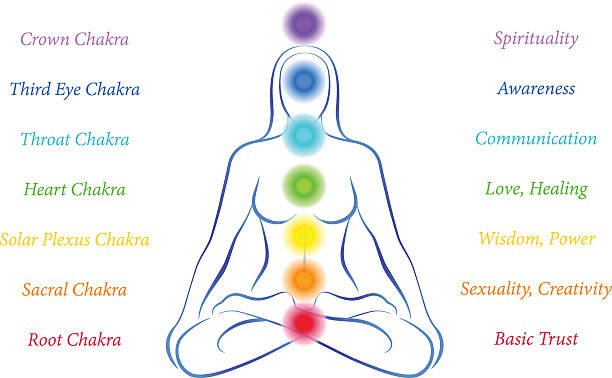 The 7 Chakras and the Healing Power within us

The Chakra is a Sanskrit word meaning wheel or a circle. It is the center of the energy, the focal point from where energy flows. It is believed to be the life force or prana that constantly moves inside us.

The earliest appearance of the Chakra is found in Vedic literature, in the Hindu scripture. Not to get confused with energy centers, it first appeared as Chakravartin or the king who “turns the wheel of his empire” in all directions starting from the center. The center point of the wheel represents the influence and power of the great king.

After their appearances in Vedas, the chakras are next found in the Shri Jabala Darshana Upanishad, the Cudamini Upanishad, the Yoga-Shikka Upanishad, and the Shandilya Upanishad. Then the great Yogi Patanjali described Charkas to his devotees in the form of Yoga Sutras. It is popularly known as Yoga Sutras of Patanjali.

Over time the concept of chakra kept on changing and the most popular form practiced today is seven chakras in our body system.

Seven Chakras In Our Body

These seven chakras start from the base of our spine to the crown of our head. Balancing each one of chakra will help us heal completely and one can attend a higher level of spirituality. Here are the seven chakras and let’s know what each of them signifies.

It is the Chakra 1 and is connected to the earth element. Situated at the base of the spine, it provides the foundation on which we build our life. The Root Chakra, Muladhara is derived from two Sanskrit words: Mula meaning “root” and Adhara, which means “support” or “base.”

The basic characteristics and functions of the root chakra are:

Imbalance in the root chakra may lead to a feeling of anxiety disorders, fears, or nightmares. Physical imbalances may manifest as problems in the colon, with the bladder, with elimination, or with lower back, leg, or feet issues.

While meditation is the first choice to balance any chakras, these yoga asanas might help one to balance the root chakra:

It is the chakra 2 and is connected to the water element. Situated slightly below the navel at the center of the lower belly, it is linked with the emotional body, sensuality, and creativity and is directly associated with the lymphatic system.

The following are the psychological and behavioral functions of sacral chakra:

The one who has balanced sacral chakra feels a connection with everyone in the universe. The imbalance might cause feeling plenty of shame, guilt, or internal pain.

These yoga asanas might help one to balance the Sacral Chakra:

It is the chakra 3 and is connected to the fire element. Situated in the solar plexus area (upper part of the belly, where the diaphragm rests), it is associated with thoughts and emotional responses, healthy boundaries, and being peace with own. Its physical association is with digestive function. The Sanskrit name for the solar plexus is Manipura  which means “city of jewels” or “seat of gems.”

The third chakra is associated with the following characteristics:

The imbalance might make a person too assertive, manipulative on every single thing, misuse of the power.

The yoga asanas that are helpful in balancing solar plexus are:

It is the chakra 4 and is connected to the air element. Situated in the center of the chest, it is associated with the feeling of love, compassion and the principles of transformation and integration. Anahata is a Sanskrit word meaning the melodious sound created without any two things striking, as well as unstuck, unhurt, fresh, and clean.

The psychological characteristics of the heart chakra are:

The imbalance causes being too defensive, feeling of jealousy, isolation.

Among many other healing techniques, these yoga asanas might come handy in balancing the heart chakra:

It is the chakra 5 and is connected to the element sound. It is situated at the center of the neck at the level of the throat. It is the channel that transmits the energy between the lower part of the body and the head. It is associated with the principle of expression and communication. In Sanskrit this chakra is also known as Vishuddha, meaning purification.

The behavioral characteristic of the throat chakra are:

The imbalance causes no patience to listen to others, you only want to express yourself, or fear of speaking, feeling of shyness.

Chanting Om is one of the best ways to heal Throat Chakra, this yoga also helps in balancing it:

It is the chakra 6 and is connected with the supreme element. Situated in between the eyebrow, it is the center of the intuition. It is associated with the principle of openness and imagination. Its Sanskrit name is Ajana meaning to perceive, to command.

The third eye chakra is associated with the following psychological and behavioral characteristics:

The imbalance in the brow chakra might cause one feeling stuck in small problems, rejecting spiritual wisdom and knowledge, no clarity in mind.

Chanting Om Namah Shivaya is one of the methods of strengthening the third eye chakra. These yoga asanas are also helpful in balancing it:

It is the chakra 7 and has no connection with any element. It is directly connected to the thought. Situated at the top of the head gives us access to higher dimensions of consciousness.  In Sanskrit, the Crown Chakra is named as Sahasrara (meaning ‘thousand-fold’ Chakra), since it is portrayed as a lotus having thousand white petals.

The psychological and behavioral characteristics associated with the crown chakra are:

The imbalance causes being disconnected to spirit, disconnection with body or possession on the spiritual matter only.

Being connected with wisdom or the master can balance the crown chakra. These yoga asanas are also helpful: 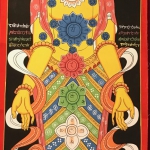 7 Chakra Thangka is handpainted in Kathmandu Nepal which describes 7 chakras in the body.
Buy 7 Chakras Thangka