In Tibet, he may be represented either as a Buddha or as a Bodhisatwa. As a Buddha, he has the urn (small round bulge or protuberance above the bridge of the nose) the fourth superior marks of a buddha Ushinisha (A Buldge of the protuberance in the skull of the Buddha the first superior marks of a Buddha ) short and curly hair. He wears a monastic robe, is seated with the legs crossed.

His left hand lying in his lap in meditation mudra, usually holds the medicine bowl, while the right hand in charity mudra hold either a branch with fruit or the fruit alone, of the myrobalan, as a medicinal plant found in India and other tropical countries.

Be the first to review “Golden Medicine Buddha” Cancel reply 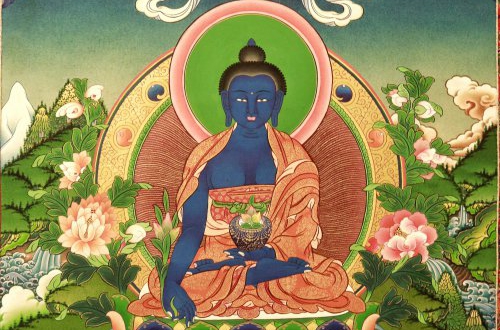