The dragon is one of the four Chinese spiritual animals.  The others are the Phoenix, unicorn and the tortoise. As protectors of the four directions or, cardinal points of the compass, they are the red bird, white tiger, dragon,

The dragon is one of the four Chinese spiritual animals.  The others are the Phoenix, unicorn and the tortoise. As protectors of the four directions or, cardinal points of the compass, they are the red bird, white tiger, dragon, tortoise.

Much has been made of the distinguishing characteristics of the various Asian dragons.  There is an iconographic convention in which the common dragon is four-clawed, the five-clawed one is the celestial one that is the Chinese Imperial emblem, and the colonial type such as the Japanese one is shown with only three.

The image of a dragon, its face of mask or an abstract design representing its serpentine form is generally used as a protective mark.

In the Tibetan tradition, the turquoise dragon is said to protect against discord of all types but especially slanderous gossip and the misuse of words.   Dragons often appear on metal musical instruments such as bells, gongs and the small cymbals that can serve to represent the music offering on a Buddhist shrine.  This may relate to the roar of righteous indignation of the protective dragon but also to its legendary love of music.

They are also often found in architecture where they protect against fire and earthquakes.  Their image functions as a kind of amulet or talisman of security so they are found at the bases of monuments, on bridges and on the eaves of roofs.

The dragon as a symbol of enlightenment. Today dragons decorate roofs and gates of temples, both as guardians and to symbolize the dragon's power of clarity. Buddhist dragons often are depicted holding a mani jewel, which represents the Buddha's teaching.

27
May
2019
Buddhism, Deities sadiksha
Lion-faced Dakini is a secret form of Vajrayogini also has a relationship to Troma and the practice of chöd. She is appropriate for clearing obstacles of the most pervasive and malignant kind and cutting through the “three poisons” of mind. This ancient practice has been important in Tibetan Buddhism since the time of Guru Rinpoche. PeGyal Lingpa received this revelation directly from Padmasambhava, appearing in a red-black form, instead of the more common dark .
Read More

16
Sep
2018
Buddhism sadiksha
Cundi Bodhisattva appears with eighteen arms on a lotus and is referred to as Mother of the Seventy Million Buddha.  She is the protector of the living being, and he has fulfilled all the wishes of the world and the world, showing the deepest blessing. Her fortune and wisdom are infinite.  She is a great sorrowful sorrower who has been praying for a thousand years. Eighteen Arm and its Uniqueness Cundi has eighteen arms which represent .
Read More 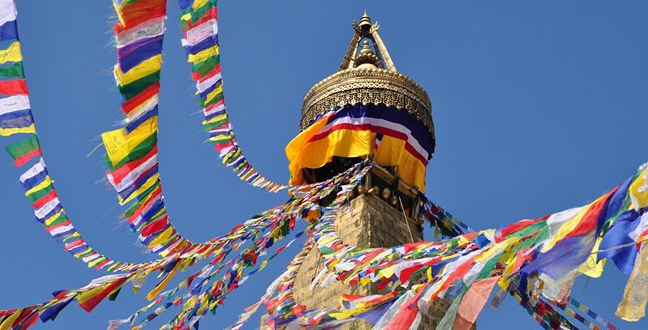 2
May
2018
Buddhism sadiksha
The hoisting of flags to ensure good fortune is one of the many customs within the nomadic communities of Tibet that have changed very little for several thousand years. However, the meaning of this ritual has gradually evolved from being of militaristic to religious significance. Origin of Prayer Flags That the original use of flags in Tibet was militaristic is illustrated by the term Ru-dar or banner. Ru refers to the gathering of nomads .
Read More