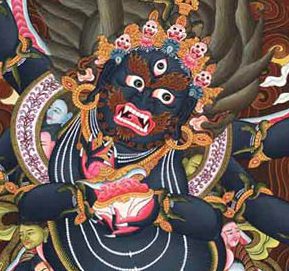 Mahakala is the wrathful emanation of the Buddha of Compassion appearing in the form of a Dharma Protector.

Mahakala, known as Daheitian in Chinese, has two, four, or six arms. The two-armed Mahakala is the karma protector of the Karma Kagyu School.

He has a wrathful expression to subdue inner demons. He is a symbol of fearlessness.