Be the first to review “Statue of Amitabha Buddha” Cancel reply 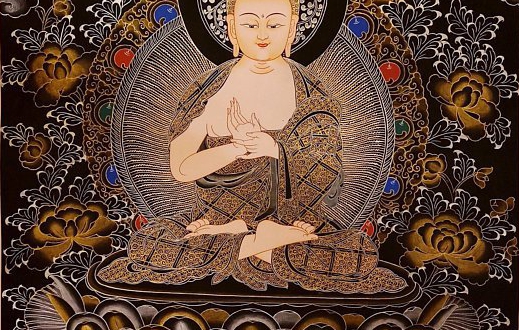 28
Nov
2018
Buddhism, Monks, Rinpoche, Shamarpa Rinpoche sadiksha
Shamarpa Rinpoche was the emanation of Amitabha, the Buddha of Limitless Light: a living example of the appearance of Amitabha in our world in the form of a Mahabodhisattva. The Tibetan title of Shamar means “the lama of the ruby-red crown”, named after the replica of the Karmapa’s own crown which he bestowed on the Shamarpa. The successive incarnations of the Shamarpas are also known as the “Red Hat Karmapa”. Birth and Early life The 14th .
Read More

3
Dec
2018
Buddhism, Culture, Design, Thangka dipakdaspaswan
By the time the painter sat down to begin the sketch he already had in mind the main contents and design of the thangka. Usually, the patron had indicated to the painter precisely which deities he wanted to be depicted. Sometimes the patron also furnished a diagram that showe the names and relative positions of each figure in the painting, such diagrams often having been composed by the lama of the patron. When the .
Read More

28
Nov
2018
Buddhism, Monasteries, Rinpoche, Shamarpa Rinpoche, Stupa sadiksha
Shar Minub is located in the Kathmandu, in a valley at the base of Nagarjuna mountain. The monastery is founded by the late 14th Shamar Rinpoche. He made great efforts to establish a monastery at Shar Minub, in Kathmandu, for the benefit of Buddhist students in Nepal. The Sharminub Institute is located below the holy Nagarjuna mountain with a beautiful view over the Kathmandu valley. Meaning of Shar Minub “Shar” means “to rise”, “Nub” means “to .
Read More

14
Nov
2018
Buddhism, Mantra, Meditation, Mudra, Symbols, Yoga sadiksha
First of all, mudra is the Sanskrit word for “gesture,” “mark,” or “seal,” is a symbolic gesture in Buddhism and Hinduism. What is the meaning of Dharmachakra Mudra? Dharmachakra Mudra is called as the gesture of Teaching of the Wheel of Dharma that describes one of the most important moments in the Buddha’s life. Buddha performed the Dharmachakra mudra in his first sermon in Sarnath after he attained enlightenment. It is performed with the help of both .
Read More