Buddha Vairocana – The embodiment of Dharmakaya 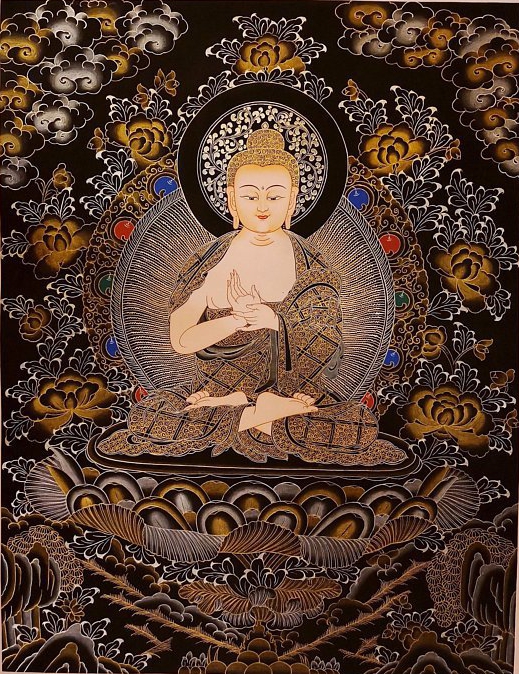 Buddha Vairocana – The embodiment of Dharmakaya

Vairocana is a Buddha who has also known as the embodiment of Dharmakaya and therefore can be seen as the universal aspect of the historical Gautama Buddha. In Sino-Japanese Buddhism, he seems to the embodiment of the Buddhist concept of shunyata or Emptiness. In the fifth Buddhism Conception of Vajrayana Buddhism, he is at the center.

His consort is White Tara. The Vairocana statue in Nara’s Todai-Ji which is located in Japan is the largest bronze image of the Vairocana Buddha in the world. The larger of the monumental statues that were destroyed at Bamyan in Afghanistan was also a depiction of Vairocana.

Dhyani Buddha Varoicana is dedicated to Java, Indonesia, the ninth-century Mendut temple near the Borobudur in Magelang. The temple which is built by the Sailendra dynasty was featured 3 meters tall seated stone statue of Dhyani Buddha Vairocana performing the Dharmachakra mudra hand gesture.  The statue flanked with the statue of Boddhisatva Avalokitesvara and Boddhisatva Vajrapani.

Brahma Net Sutra is first to introduce by Buddha Vairocana.  Now  Vairocana Buddha is sitting atop a lotus pedestal; On a thousand flowers surrounding me are a thousand Sakyamuni Buddhas. Each flower supports a hundred million worlds in each world, a Sakyamuni Buddha appears. All are seated beneath a Bodhi-tree, all simultaneously attain Buddhahood.

All these innumerable Buddhas have Vairocana as their original body.  Innumerable of Vairocana is also mentioned in the Flower Garland Sutra, however, the doctrine of Vairocana Buddha is based largely on the teachings of the Mahavairocana Sutra and to a lesser degree the Vajrasekhara Sutra. Vairocana features prominently in the Chinese school of Hua-Yen Buddhism, and also later schools including Japanese Kegon Buddhism, and Japanese esoteric, or Shingon Buddhism.

In the case of Shingon Buddhism, Vairocana is the central figure. In Sino-Japanese Buddhism, Vairocana was gradually superseded as an object of reverence by Amitabha Buddha, due in large part to the increasing popularity of Pure Land Buddhism, but Vairocana’s legacy still remains in the Todai-Ji temple with its massive bronze statue and in Shingon Buddhism, which holds a sizeable minority among Japanese Buddhists. Vairocana is not to be confused with Vairocana, who appears in the eighth chapter of the Chandogya Upanishad as the king of the Asura.

The Vajrasekhara Sutra is an important Buddhist tantra which is used in the Vajrayana schools of Buddhism but can refer to a number of different works. In particular, a cycle of 18 texts studied by Amoghavajra, which included both Tattvasaṃgraha Tantra, and the Guhyasamaja Tantra, a Tibetan text which appears to be composed of two words grouped together and to further confuse matters in the Japanese Shingon school the Sarvatathāgatatattvasaṃgraha Tantra is known by this name. In Tibet, it is also considered also the main representative of the Yogatantra class of texts.

The tantra begins with Vairocana Buddha preaching the Dharma to a great host of Bodhisattvas, including Vajrasattva, in the Pure Land of Akanishta. As he preaches the Dharma, Prince Sarvarthasiddhi, the esoteric name of the Buddha, Siddhartha Gautama, is meditating under the Bodhi Tree. Enlightenment is imminent, but the Prince has still not attained it because he is still attached in some small way to his forsaken ascetic practices. Despairing over his inability to find Enlightenment, he is visited by Buddhist figures who were just now learning the Dharma from Vairocana.

The Chinese translation has preserved the original Sanskrit mantras in the Siddhaṃ script. The text was translated into Chinese in 724 by Subhakarasiṃha who had traveled to China from Nalanda. It is possible that the Sanskrit text was taken to China circa 674 by the Chinese pilgrim Wu-xing.

The doctrine of Buddha Vairocana

In the Rigveda of Hinduism, the word Vairocana has the connotation of a brilliant and luminous sun. Indeed, he is also known as  Namnang in Tibet which has meant the illuminator and the Japanese translate as Great Sun. It was the sutra which has that prompted the Japanese monk, Kukai to journey to China to learn more about Tantric Buddhism.

Vairocana which often displays the Dharmacakra mudra. Dharmacakra in Sanskrit means the Wheel of Dharma. Dharmacakra mudra symbolizes one of the most important moments in the historical life of the Buddha, the occasion when he preached to his companions the first sermon after his Enlightenment in the Deer Park at Sarnath.

Significantly, he is said to be the sum of all the Dhyani Buddhas and combines all their qualities. He is pure white since white is a blend of all colors. His lotus seat is supported by a pair of two great lions.

The lion is the king of beasts and when he roars all others fall silent. Similar is the roar of Buddha’s teachings, in relation to the grandeur of which all other voices of our everyday life become insignificant and fall silent. meditating on the image of Vairocana is specifically believed to transform the delusion of ignorance into the wisdom preached by the Dharma.

When Gautama Buddha turned the wheel of the Dharma, by ignorance it illuminated the hearts of men and women darkened. With regard to Emptiness, the massive size and brilliance of Vairocana statues are intended to serve as a reminder that all existence is empty, and without a permanent identity. He is distinguishing about emblem is the golden or solar wheel. 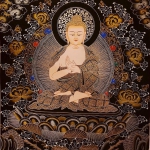