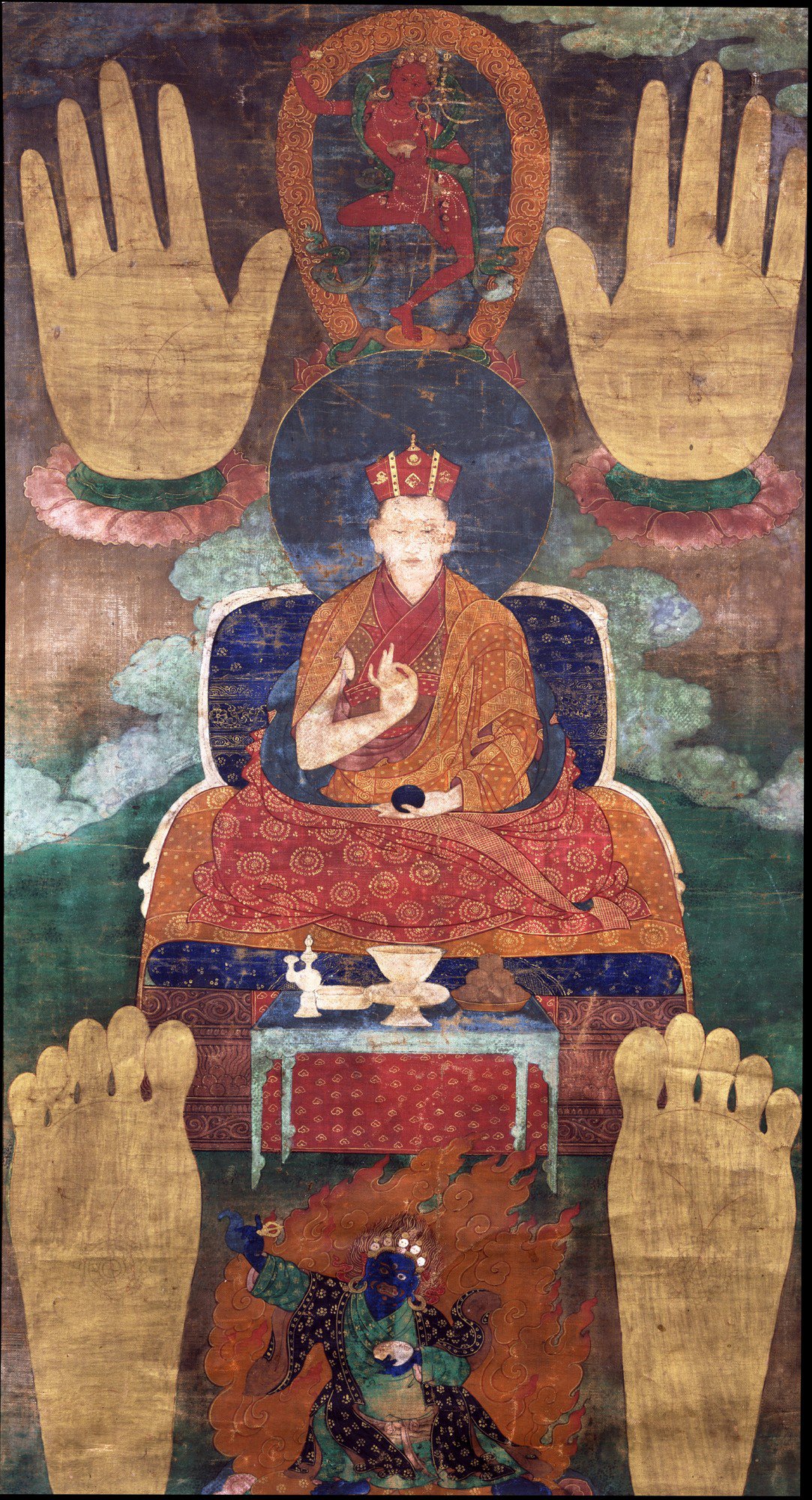 Shamarpa who is also known as the red hat lama of the Kamtsangpa school, with  Vajravarahi above the black cloak Mahakala. Depicting Lama Teacher – Shamarpa

The life of Shamarpa

Shamarpa is known as zhwa dmar pa in Tibet. Shamarpa is also known as Shamar Rinpoche, or more formally Künzig Shamar Rinpoche is a lineage holder of the Karma Kagyu school of Tibetan Buddhism and is regarded to be the mind manifestation of Amitabha.

In the iconography of the Shamarpa, We will learn about his body posture, hand and leg gesture, and different representations of Sharmapa in thangka and statue.

Posture of the Shamarpa

Shamarpa is youthful in appearance with the eyes gazing slightly downward, Shamarpa is light in complexion. The right handheld to the heart is in the mudra of blessing and the left placed palm upward in the lap performs the mudra of meditation supporting a small black begging bowl.

The head is adorned with the red vajra crown in the same design as the black vajra hat of the Karmapa. Shamarpa is attired in the garb of a monk, across the shoulders is an orange patchwork robe. He is  Covering the upper torso is a monastic vest, originally designed for the Buddhist nuns of India.

Above and below the outline of the hands and feet of the teacher lama has been traced and filled with gold, standing on a pink lotus blossom, each marked on the palm and sole with a faint eight-spoked Dharma wheel.

The lower body is wrapped with a thick red meditation cloak decorated with a gold floral pattern. With the head surrounded by a blue aureola of light, the back supported by a dark blue backrest and the top covered with a white scarf, above a thick cushion seat, spread with a monk’s patchwork mat, he sits atop a small throne platform. In front of a plain table, a water flask, teacup, and a gold plate stacked with fruit are arranged. From the foreground of a plain green hillock, blue clouds rise into a violet sky behind.

Previously, we learn about the life of the Sharmapa and iconography of Shamarpa. Now, we are going to learn about depicting lama teacher Shamarpa thangka. 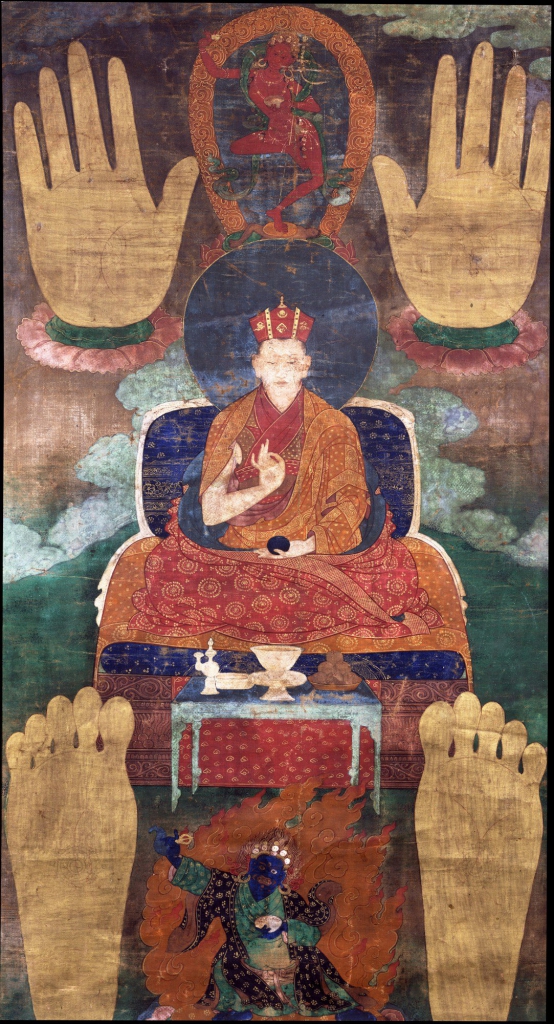 The thangka of lama teacher Shamarpa is from Eastern Tibet.  It is made between 1700 – 1799 AD. Shamarpa is from Karma (Kagyu) and Buddhist Lineages. The size of the painting is 71.12×36.83cm. Ground Mineral Pigment and Raised Gold on Cotton is used to color this thangka. Currently, this thangka is in Rubin Museum of Art.

By depicting this thangka, we will learn about the presentation of Shamarpa with Vajravarahi, The protector of Karmapa’s,  and Black Cloak Mahakala, etc.

The right holds upraised a curved knife and the left a white skullcup to the hearing. A Katanga staff rests in the crook of the elbow. Adorned with bone, gold and jewel ornaments, with a green scarf about the neck.

She stands in a dancing posture atop an orange sun disc, human corpse, and pink lotus seat, completely surrounded by the orange flames of pristine awareness.

Protector of the Karmapas

The protector of Karmapa’s is at the bottom center of the thangka. Karmapas is wrathful in appearance with three round eyes and yellow hair flowing upward. The right-hand holds aloft a curved knife and the left a skullcup to the heart.

Karmapas is adorned with a crown of five white skulls and attired in a long black cloak with a green garment beneath. He stands with the right leg bent and the left straight atop an orange sun disc and pink lotus seat surrounded by the brightly burning flames of pristine awareness.

The subject of this simple yet expressive painting is Black Cloak Mahakala, the special protector of the Karma Kagyu School of Tibetan Buddhism, and their hierarchs, the Black Hat Karmapa lamas.

The vibrant lines of the protector’s face dominate the composition, and the subtle use of a greenwash in the tunic accentuates the blackness of Mahakala’s cloak on an already black ground, thus foregrounding the characteristic feature of the deity. This reflects a delicate aesthetic sensibility employed in the service of iconographic clarity.

Previously, we learn about the life of the Sharmapa, iconography of Shamarpa, and depicting lama teacher Shamarpa thangka. Now we are going to learn about several Tulku lineage of the Kamtsangpa school.

Now we will learn about the lineage of Kamtsangpa school.

Some of the several tulku lineages of the Kamtsangpa School are entitled to wear the following things which have been listed below:

This Buddha, tittle Tathagata Koncho Yenlak,  in the form of a bodhisattva is also known in Tibet, as the Red Crown Karmapa. The first Shamarpa was a gifted child. Very early in life, it became apparent that he had a brilliant mind. What was much Jess apparent was that he had the gift of clairvoyance.

He assimilated the 12Vajrayana· teachings through a Dakini, whose presence was known to no one but him. Among all the transmissions given to him, it .was the practices of Dorge Pamo (Vajra Varahi) that he had the greatest affinity to. 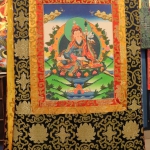