This is used as a device for meditation and which is worshipped for the betterment of all the sentient beings. It also represents the cosmos system which consists of the five major elements of life. Namely – Fire, Earth, Water, Air, and Space.

The Kalachakra Mandala was designed by the Dalai Lama as a visual tool for Buddhist practitioners.

The central symbol of the lotus, representing the Buddha, is surrounded by a structure that reminds a palace. Every detail of the mandala, each deity, and symbol, has both a physical meaning (Outer Kalachakra) and spiritual symbolism (Inner Kalachakra) and they are interconnected by the doors of the structure.

Kalachakra is a symbol of inner peace and helps to restore physical and mental balance.

Be the first to review “Blue Kalachakra Mandala” Cancel reply

15
Sep
2020
Art, Mandala Pratima
The word Kalachakra refers to the wheel of time or time cycle in Buddhism. And, Tantra is considered to belong to a magnificent yoga class. The origin of this tradition was first in India and then it is most active in Tibet. This Tradition teaches on Cosmology, Theology, sociology, myth, prophecy, medicine, and yoga. These teachings are to signify the transformation of one body and mind into perfect Buddhahood through various yogic methods. The .
Read More 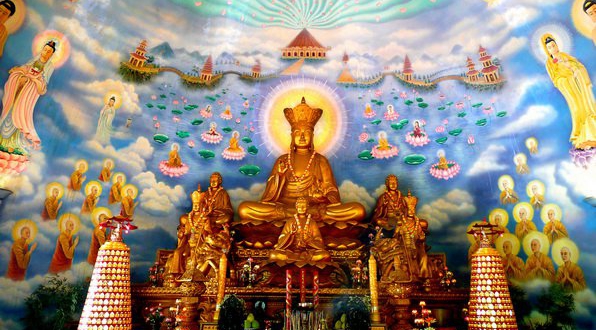