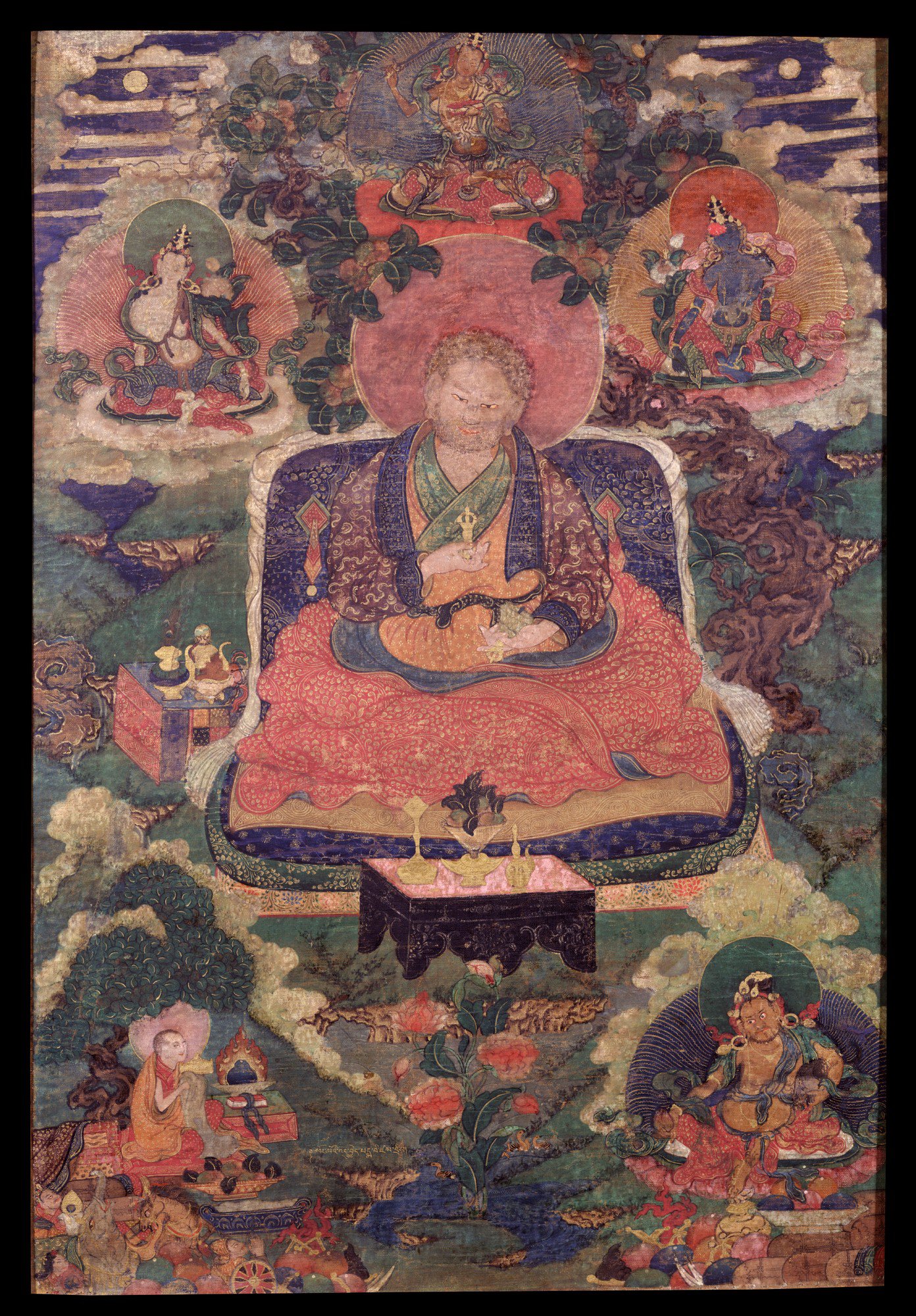 Dragpa Gyaltsen was a Tibetan spiritual leader and the third of the Five Sakya Patriarchs of Tibet. He was also known as the guru of the famous Sakya Pandita.

Jetsun Drakpa Gyaltsen wrote extensive Lamdre commentaries as well as other commentaries on Tara and other sutra and tantra topics. He was the son of Sachen Kunga Nyingpo and the brother of Sönam Tsemo.

Dragpa Gyaltsen known as the Fifth Throne Holder of Sakya and the third son of Sachen Kunga Nyingpo. As a Dragpa Gyaltsen inscription at the lower left states that the composition was drawn by the artist Pema Namgyal.

The iconography of the Dragpa Gyaltsen

In the iconography of Dragpa Gyaltsen, we will learn about his body posture, leg, and hand and different representation of the Dragpa Gyeltsen: Jetsun in thangkas and statue.

He is also free of adornment and ornamentation indicative of the vows of a celibate layman. Dragpa Gyaltsen is with the lower body wrapped in a red meditation cloak.

Dragpa Gyaltsen sits comfortably on a wide cushion seat with a dark blue backrest and pink areola. In front of the thangka, there is a small table that supports decorative objects. 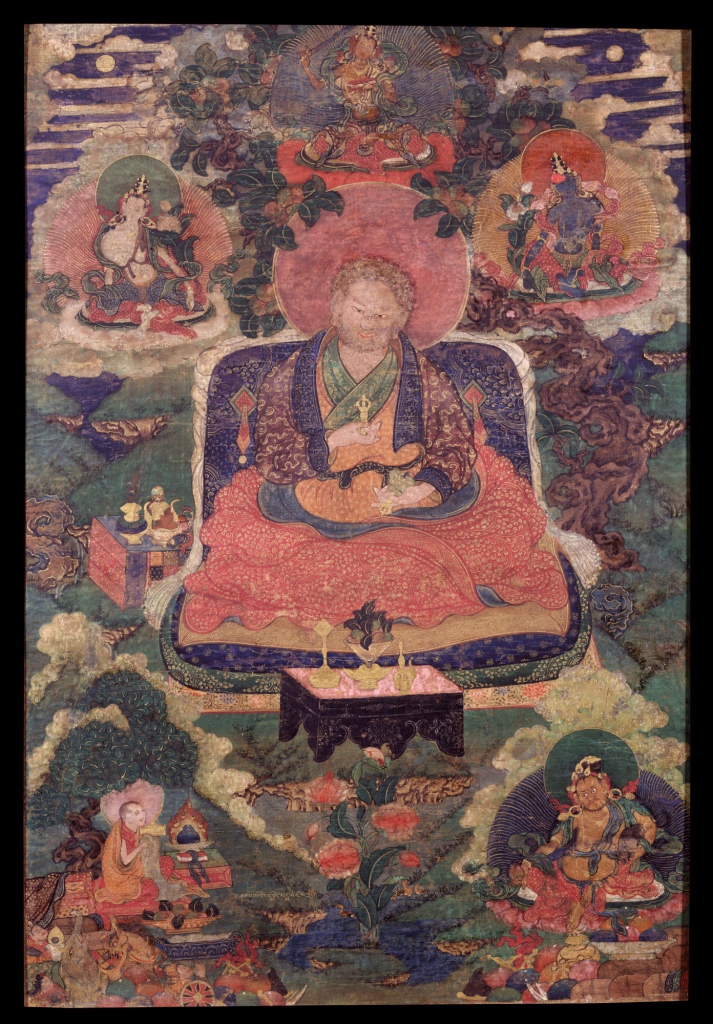 The thangka of Dragpa Gyaltsen is from Central Tibet. It is made in between 17 AD to 1799 AD.

The base of the painting is cotton ground mineral pigment.

Currently, this painting is in the Rubin Museum of Art.

By depicting this thangka, We will learn about how Dragpa Gyaltsen is presented with Wisdom Arapacana Manjushri, Padmapani Avalokiteshvara, Vajrapani, Yellow Jambhala, and Monk, etc.

Wisdom Arapacana Manjushri is orange in color and holding upraised in the right hand the sword of wisdom.

The left hand of Arapacana Manjushri holds to the heart the Prajnaparamita folio book.

The right hand of Padmapani Avalokiteshvara supports the body in a relaxed posture.

And the left hand of Padmapani Avalokiteshvara extended across the knee holds the stem of a lotus blossom.

Vajrapani is at the right of the thangka. Vajrapani is the bodhisattva of power Vajrapani who is blue in color.  The left hand of Vajrapani pressed to the seat.

And the right hand of Vajrapani extended across the knee holding the stem of a lotus blossom supporting a gold upright vajra.

These three collectively known as the Lords of the Three Families represent the wisdom, compassion, and power of all the buddhas of the three times and ten directions. The origins of this threefold model are found in the framework of the Kriya Tantra classification.

At the bottom right of the thangka, there is the wealth deity yellow Jambhala who is mature with facial hair and corpulent.

In the right hand of Yellow Jambhala, he holds a Bijapuraka fruit extended in the mudra of generosity.

With the left hand, he grasps to the side a brown mongoose expelling precious jewels.

Yellow Jambhala is adorned lavishly with gold ornaments and silks. He rests the right foot on a conch and gold treasure vase while seated on a moon disc and pink lotus blossom.

The foreground is strewn with bales of cloth, wishing jewels and precious objects.

At the left in front of a twisted tree kneeling reverentially a monk wearing orange and red robes offers a gold mandala plate respectfully held with a white scarf.

Monk is surrounded by a wealth of offering riches and a precious jewel on the table in front, the remaining Seven Royal Jewels adorn the foreground wheel, minister, queen, elephant, horse, and general.

Dragpa Gyaltsen with Sanggye Lama was painted around 1800-1899 AD. The size of this painting is 67.95×44.75cm. The base of the painting is cotton and the ground mineral pigment is used to color it. Dragpa Gyaltsen belongs to Sakya and Ngor Lineage. This Masterpiece Thangka Art is still preserved and kept in the Rubin Museum of Art.

By depicting this thangka, We will learn about how Dragpa Gyaltsen is presented. 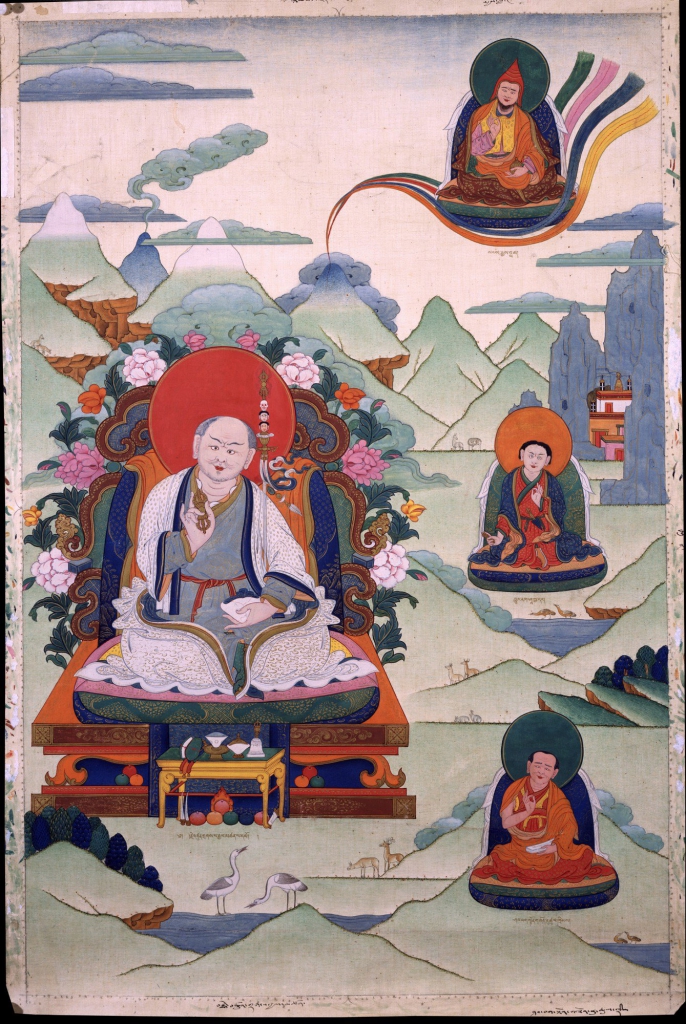 Dragpa Gyaltsen with Kalachakra was painted around 1500-1599 AD. The size of this painting is 80.01×68.58cm. The base of the painting is cotton, the ground mineral pigment and raised gold is used to color it. Dragpa Gyaltsen belongs to Sakya Lineage. This Masterpiece Thangka Art is still preserved and kept in the Rubin Museum of Art.

By depicting this thangka we will learn about the presentation of Dragpa Gyaltsen with Sakya Pandita Kunga Gyaltsen Pal Zangpo, Kalachakra, Shakyamuni Buddha, and Eight Taras, etc. 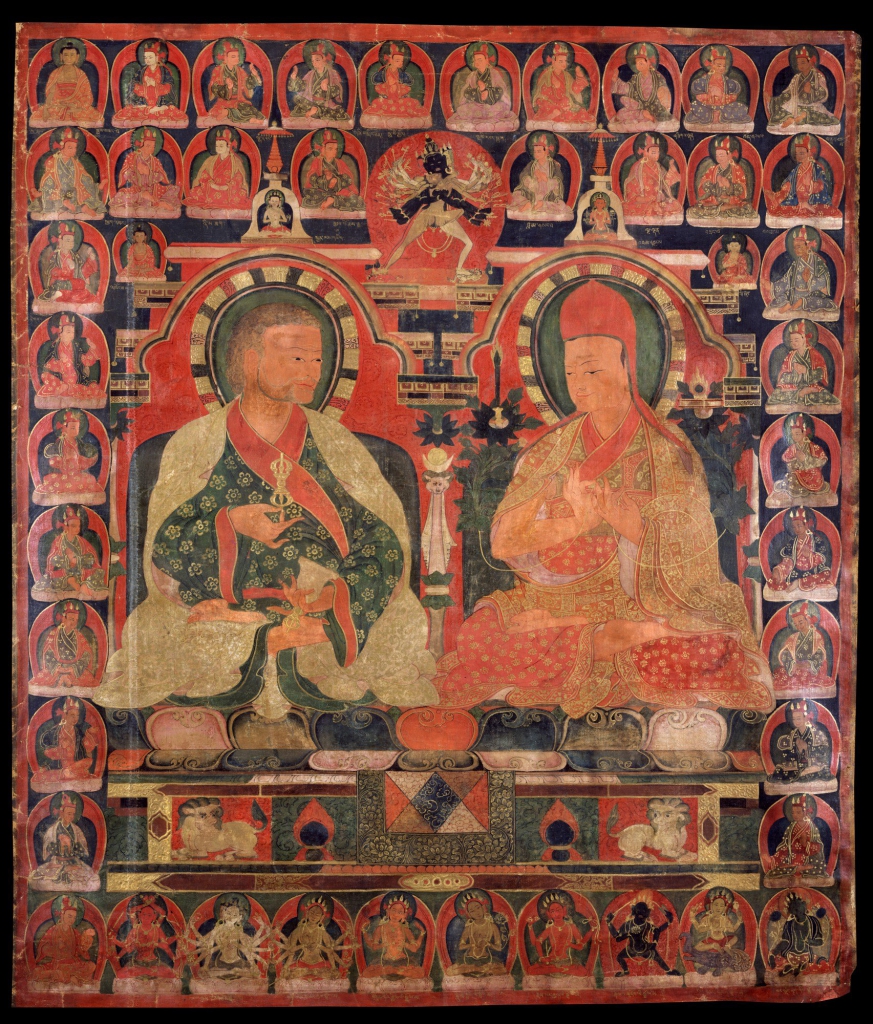 At the center-left of the thangka, there is Jetsun Dragpa Gyaltsen. He is gazing to the side with short-cropped hair and a beard. Dragpa Gyaltsen is attired in the garb of a layman.

He sits in vajra posture above a multi-colored lotus seat and lion supported throne. Above the head of Dragpa Gyaltsen, there is a small bell-shaped Caitya with a spire and parasol.

Small bell-shaped Caitya is seated inside is white Avalokiteshvara with one face and two hands performing the teaching mudra.

While holding the stems of two blue Utpala flowers supporting a wisdom sword and Prajnaparamita book at the level of the ear.

Kalachakra is at the upper center of the thangka. Kalachakra is the tutelary deity who has four faces and twenty-four hands.

Kalachakra is embracing the yellow consort Vishvamata. Above a sun disc and throne seat, they stand surrounded by the orange flames of wisdom fire.

Eight Taras is at the upper center of the thangka. Eight Taras is the tutelary deity from the set of 21 according to the lineage of Suryagupta based on the Tantra of the Twenty-one Praises.

On the right side of the thangka, there is Tara of the Sandalwood Forest who is green in color with one face and two hands. Tara is seated in a relaxed posture.

Dragpa Gyaltsen with Shakyamuni Buddha is from Buddhist lineage. The masterpiece thangka is from a private collection.

By depicting this thangka we will learn about the presentation of Dragpa Gyaltsen with Shakyamuni Buddha. 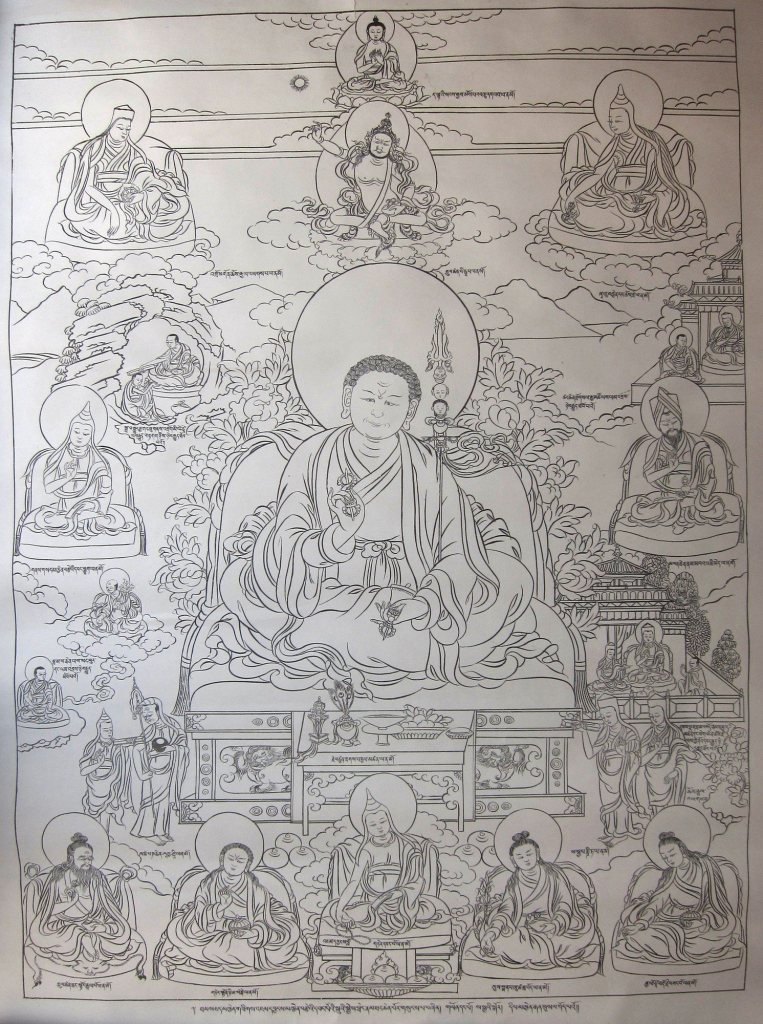 Jetsun Dragp Gyaltsen is one of five compositions depicting the previous lives of Jamyang Khyentse Wangpo. Dragpa Gyaltsen was dead in 1216.

In the top middle of the thangka, there is the presence of the Shakyamuni Buddha.