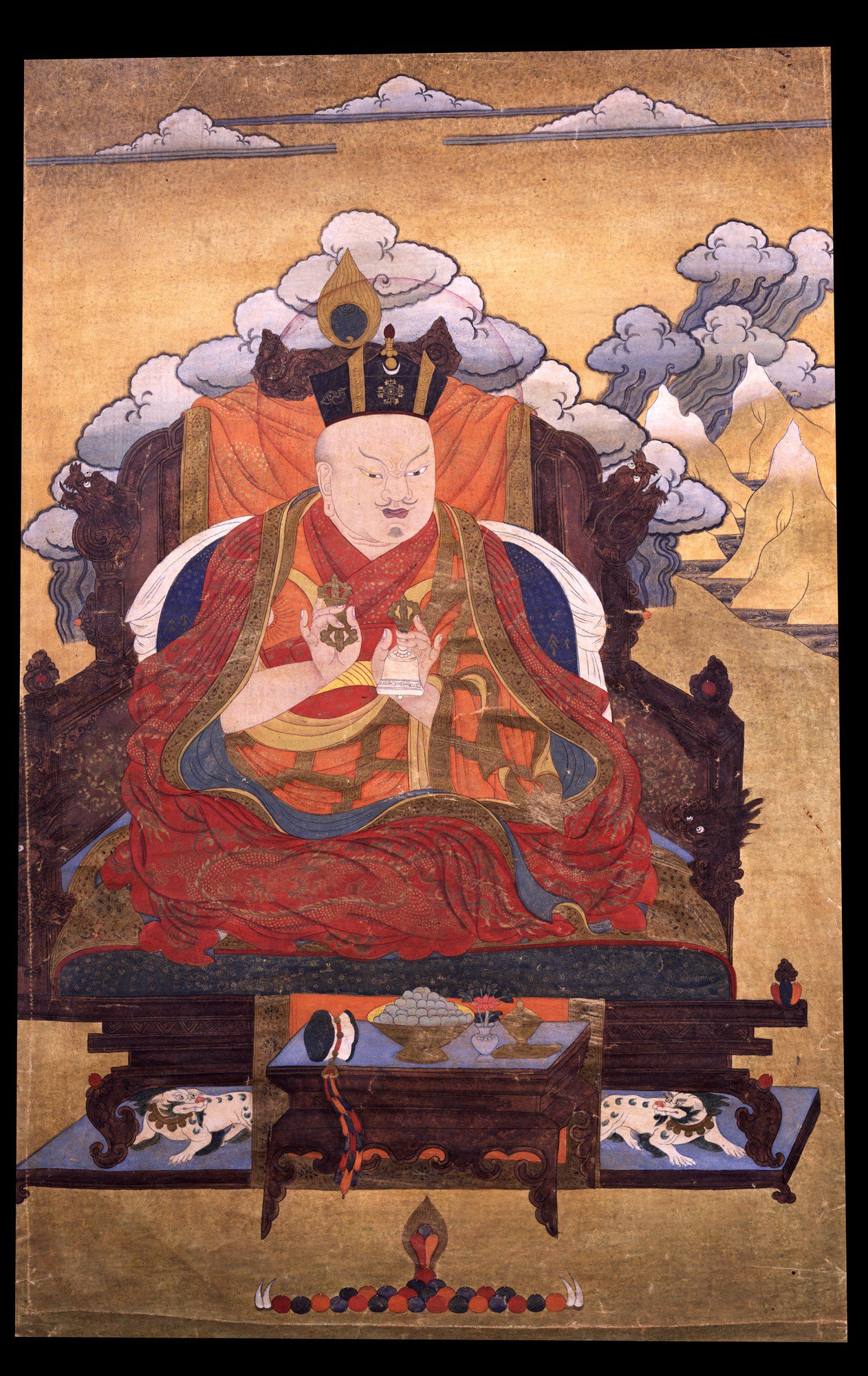 The birth of the 6th Karmapa, Tongwa Donden (1416-1453), at Ngomto Shakyam near Karma Gon in east Tibet, was marked by many auspicious signs. One month later, carried by his mother as she went begging, he became highly excited when their path crossed that of Lama Ngompa Chadral, a student of the fifth Karmapa.

When Lama Ngompa Chadral asked who he was, the child smiled and replied

“I’m the unborn, free from all names, places, and I am the glory of all that lives. I shall lead many to liberation”.

Ngompa Chadral cared for the baby for seven months, before taking him to Karma Gon, one of Karmapa’s three main monasteries in Tibet. As young as he was, Tongwa Donden soon began to teach. At age three, he met Ratnabhadra and received the full Kagyu transmission. At age six, he composed several tantric rituals.

The third Shamarpa, Chopal Yeshe, came to Karma Gon during this period too. He recognized him as the sixth Karmapa, enthroned him, and gave him further teachings. The 6th Karmapa was nine when he was ordained by Khenchen Sonam Zangpo at the monastery of Wolkar Tashi Tang.

He also began to receive instructions in the texts and practices of dharma from the great saint Ratnabhadra, who was an incarnation of Rechungpa. The 6th Karmapa concentrated strongly on developing a consistent Kamtshang liturgical system to supplement the meditative tradition of the Kagyu school and wrote many Kamtshang sadhana rituals. He also developed a new style of recitation and chanting.

In Lhasa, the 6th Karmapa received a great number of teachings from the Sakya abbot Rongtonpa, who declared that he had a Buddha as his student. Karmapa Tongwa Donden’s life was spent teaching, and building monasteries and shrines throughout Tibet.

He also commissioned editions of the Kanjur and the Tenjur, which he paid for with the many offerings he received on his tours. Throughout this time he continued to receive teachings through visions of Nagarjuna, the great philosopher, Milarepa, and Padmasambhava.

Bengar Jampal Zangpo and the first Gyaltsab, Goshir Paljor Dondrub, were his two principal students and became his lineage holders. They would become the main teachers of the seventh Karmapa, Chodrag Gyamtso.

Iconography of the Tongwa Donden

The eyes stare of Tongwa Donden is with a stern gaze and furrowed brow above. The two hands of Tongwa Donden are held at the heart display a gold vajra scepter and bell. Atop the head sits the black vajra crown ornamented with gold strips and a jewel at the peak.

Tongwa Donden is attired in the orange and red patchwork robes of a monk. Tongwa Donden sits enwrapped in a red meditation cloak atop a snow lion-supported throne decorated with a carved dragon head backrest. The low table in front supports a damaru drum, bowl of sweets, flower vase, and a teacup.

The ground is adorned with a row of variously colored wishing jewels and precious objects. 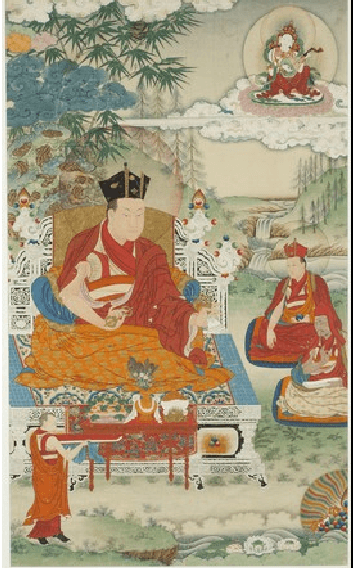 Vina Sarasvati has one face, two hands. Vina Sarasvati is seated in a relaxed manner. Vina Sarasvati is with a face like the rising moon, eyebrows like drawn lines, two beautiful eyes like utpalas, casting sidelong glances like shooting stars, a clear complexion, pink cheeks and attractive.

Vina Sarasvati is with a very slender waist and flexible hips, a body well proportioned, fair, smooth, young, ample flesh, and well-rounded. Vina Sarasvati is seated with the two legs, white, smooth, relaxed, and desirable in a slightly crouching manner. Vina Sarasvati is attractive braids, long and full, half-loose covering the upper back, half tied up in a topknot blazing with a wishing jewel.

Vina Sarasvati is wearing a beautiful gold chain strung with flowers, blue, red, and the like. Vina Sarasvati also wears earrings of gold flowers and utpalas. Next to the ears of Vina Sarasvati, there are flowing silk ribbons. 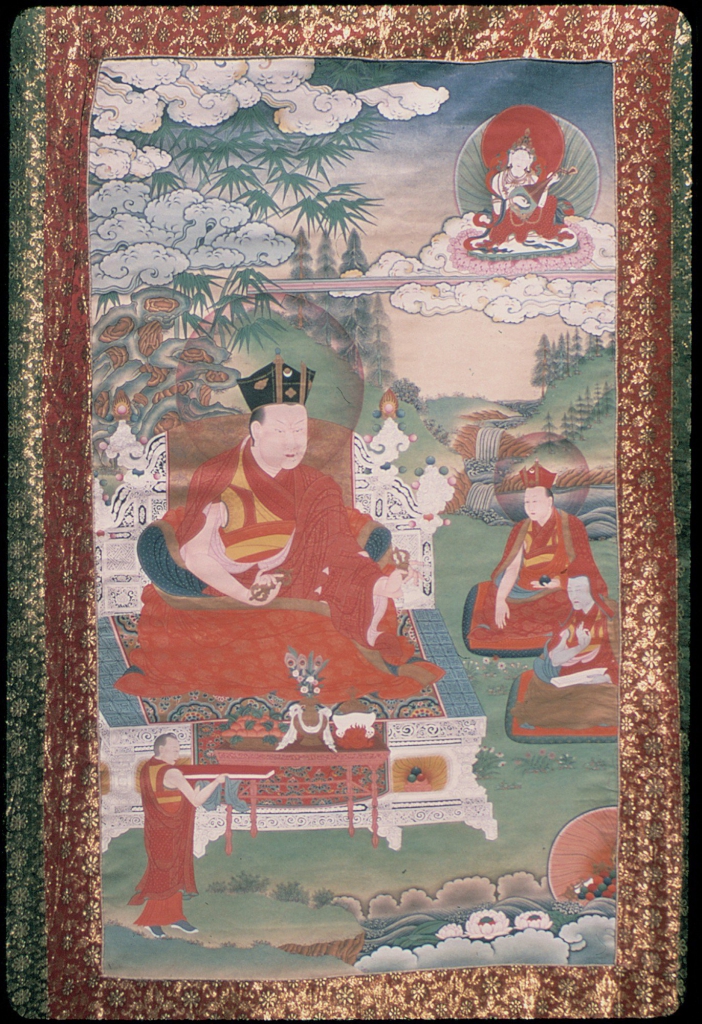 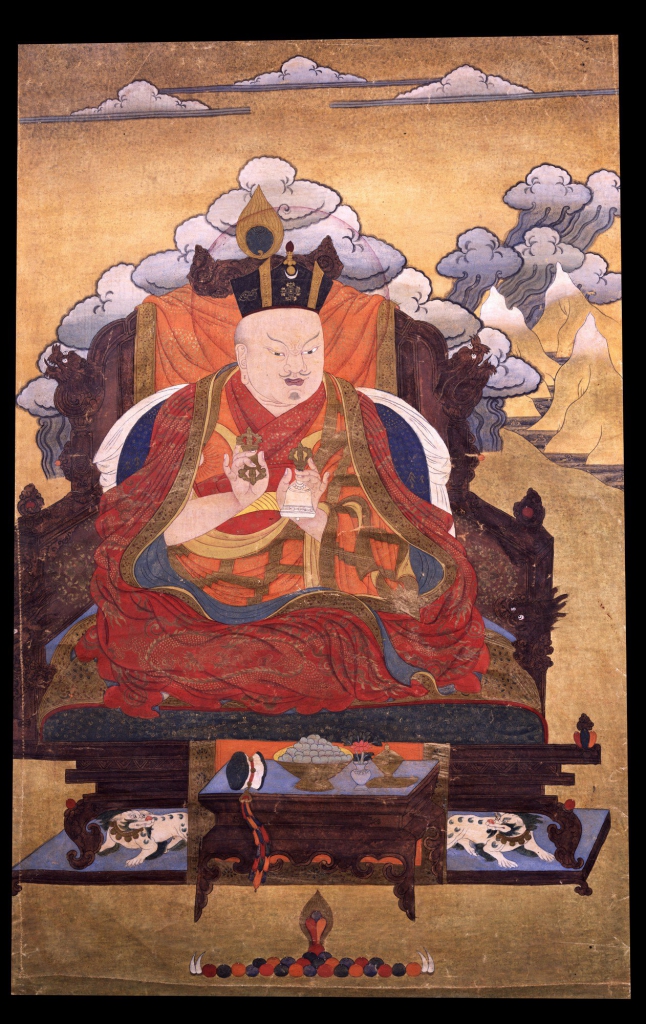 Dusum Khyenpa is at the upper right in the snowy mountain range in the thanks. Dusum Khyenpa is born in the Kham region of eastern Tibet. He was eclectic in the study, not only learning the Kamtsangpa doctrines but also familiar with Shangpa, Shije, Nyingma maha ati, and Sakyapa teachings.