All about Tara Yantra

All about Tara Yantra

Goddess Tara holds the second significant position among all the ten, Dus Mahavidyas. The Goddess Tara is the almighty Goddess of Shakti decimates all malevolent, is invulnerable and expels idleness, numbness, and haziness from the lover’s life.

The word Tara means ‘star’ and it symbolizes light. Thus, Goddess Tara as ‘light’ is known to guide, carry over, overcome and conquer hurdles for acquiring knowledge, attain powerful speech and acquire the qualities of learning.

Goddess Tara is known to offer the ultimate knowledge and salvation. She is also known as Neel Saraswati. Her weapons are Khadga, Sword, and pair of scissors. Goddess Tara is one of the oldest deities Who is worshipped in modern times as well.

Also known as the Mother creator, Goddess Tara represents the eternal life force that fuels all our lives. Even Great Yogis like Vashishtth, Vishwamitra, Ravan, Gorakhnath are known to worship her.

According to the ancient scriptures, Goddess Tara is associated with the Samudra Manthan (churning of the ocean).

After consuming the dangerous poison Halahala, Lord Shiva became unconscious in order to bring Him back to a conscious state, Goddess Tara appeared in the form of mother and fed milk to Lord Shiva and He gained consciousness.

Hence, Lord Shiva and Goddess Tara came to be known as ‘Neelakantha’ and ‘Neela Saraswati’ respectively. It is said that due to the blessings of Goddess Tara, Lord Kuber became the Lord of Wealth.

Because of her compassionate, loving and caring nature, the tantric sadhaks offer Prayers to Her as She blesses Her devotees with unlimited knowledge, eloquence, and excellent communication skills.

Just by keeping a Tara Yantra in the house, a person can get miraculous results and attain wealth & prosperity in life.

The square is the fundamental format of Tara yantras. There is a significant, well thought out logic behind it. The phenomenal world extends into four directions. These four directions represent the totality of space, and they bind the earth in order.

The square is the simplest and perfect manifestation of the number four, by virtue of the four perfect, equal lines bounding its form. Hence it is visualized as the perfect symbol to denote the terrestrial world. This mundane, physical world is the one which must be transcended by spiritual practice.

The square pattern has four gates, one in each of the cardinal directions. They are known as cosmic doors because it is through them that the aspirant symbolically enters the yantra. They represent the passage from the earthly realm to the ‘inner’, sacred space of the yantra.

These gates are an initiatory threshold which simultaneously opposes the phenomenal and embraces the noumenal. It is further believed that these gateways themselves are guarded by divine forces which protect the sacred precinct within, from negative and disintegrating forces.

When you look at the Tara Yantra, you will notice certain symbols that are engraved.

The Padma (lotus petals) symbol according to all the Vedic scriptures as well as the scriptures of other faiths is considered to be a divine emblem of purity that resides in the chakras.

A lotus in Yantra represents the unconditional force of the Supreme Absolute Truth. The lotus serves as a divine seat for Devas (Gods). It also represents detachment. It grows in the mud but never touches even a tinge of mud, representing detachment to the external forces (material world) and maintaining the original nature which is pure and divine.

The Chakra denotes rotation which is central to the functioning of the macrocosmic progression. At the same time, the circle signifies perfection and the peaceful creative void of the Vishudha chakra. In the series of the five fundamental elements, it represents the Air Element.

Finally, the Trikona is the emblem of Shakti, the absolute female energy of the Divine. It completes the creation or manifestation of both, material as well as spiritual worlds. The triangle pointing down characterizes the Yoni which is the source of all creations.

Tara Yantra can be worshipped for getting protection, speaking power and also getting auspicious results of planet Jupiter if the same is adversely placed in a person’s horoscope.

Tara yantra is kept achieving a sudden gain of wellbeing and money. It sprouts seed of wisdom and knowledge in the heart of the worshipper.

She is the person who offers mettle to individuals and causes them to rise successfully over foes. The Tara Yantram is utilized to love every one of the nine types of Goddess Durga.

Keep the Yantra at your place of love and welcome the positive energies that it produces.

The Tara Yantramis utilized to venerate every one of the nine types of Goddess Durga. This is an intense Yantra for the satisfaction of most astounding wants, expulsion of business and individual issues, to evacuate challenges and to overcome adversaries.

Tara Yantra is particularly venerated amid Navratras. This Yantra presents riches and property and shields the individual from a wide range of physical and different perils. Love of this Yantra with confidence gives advance in life and takes out troublesome issues.

It is exceptionally prescribed that each home should introduce Tara Yantram for the endowments of Goddess Durga. This yantra would open the entryways of your fate as well as favor you with all bliss and flourishing. Agents or Shop Keepers should keep it in their workplaces or shops to build their deals.

This powerful Yantra resonates with the positive energies of Goddess Tara and blesses the worshipper with prosperity, wisdom and great communication skills.

This Yantra can also be used for meditating over Goddess Tara. This will help you become more focused and mentally stable. It will also aid in attaining union with Goddess through geometric visualization. This Yantra is the window through which you can align with divine energy. Through resonance, it connects you to the energy present in the macrocosm.

How Does Yantra work?

The powers of a Yantra thrive on the reverberation of cosmic energies. When you focus at the center of a Yantra, your mind is pitched into the creative force of the Yantra through which the energy flows.

It is very important to place the Yantra in the appropriate direction for getting optimum results. Yantra energizes the location where it is installed. You may place it near the entrance of your home/office/shop or in your living room or reception or study room or office cabin.

You may keep it on a table or use as a wall hanging. Yantra is best placed in the East direction facing West. It gets energized by the rising rays of the Sun and with the divine vibrations of the East corner and provides positive transformation energies to the dwelling through its mystical geometry.

Yantra is the ultimate answer for establishing a vibration of large amplitude or resonance with the benefic energies of the cosmos. Thus the vibrations generated get us in contact with highly elevated energies and entities which help us attain spiritual course of conduct in our daily lives and enhance the spirituality within. 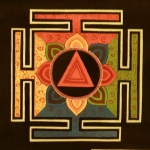