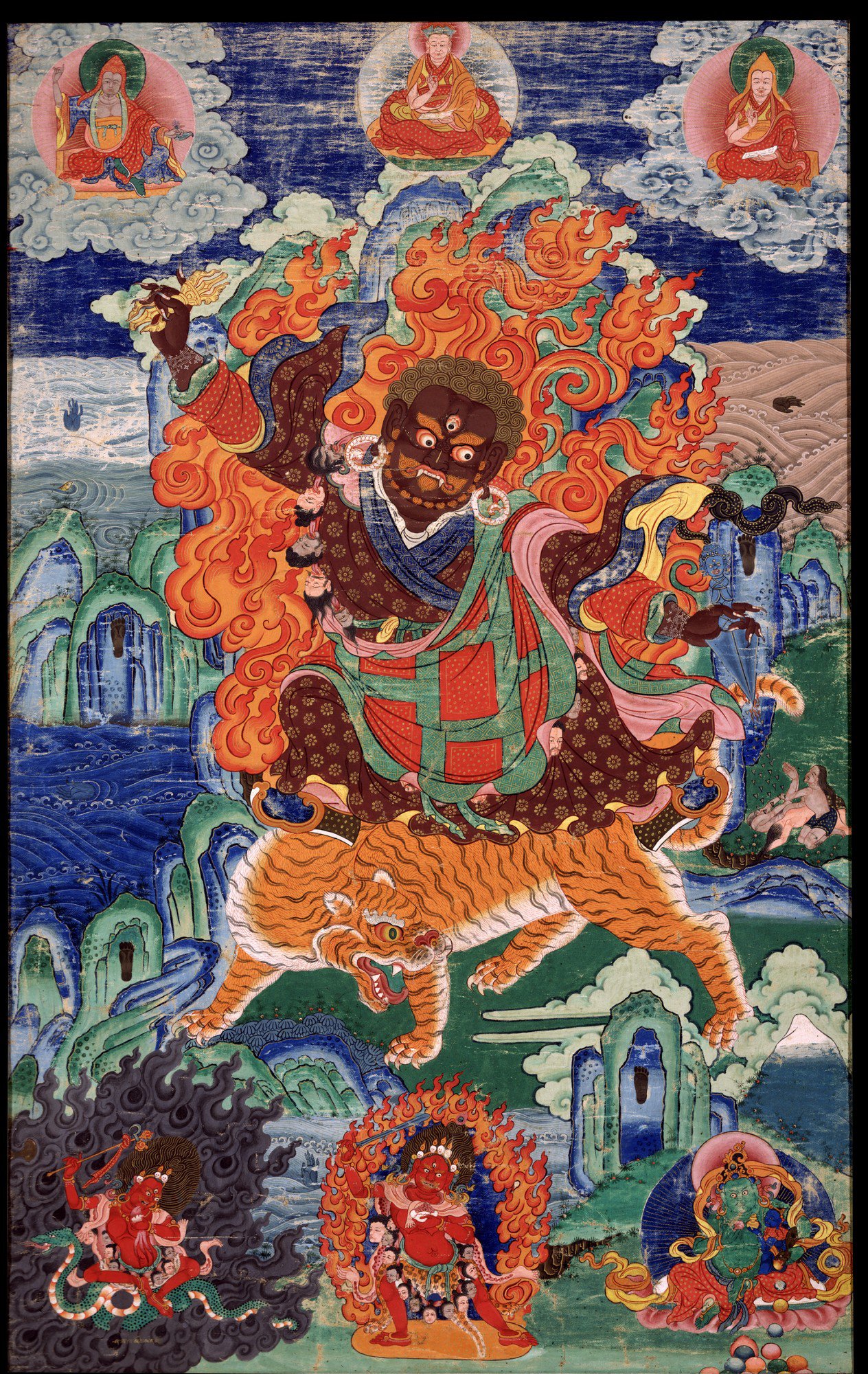 Dorje Drolo is a wrathful emanation Padmasambhava from the group of Eight Main Manifestations. Guru Dorje Drolo the fierce manifestation of Vajrakilaya known as Diamond Guts.

Dorje Drolo is one of the Eight Manifestations of Guru Rinpoche. He assumed this manifestation in Paro Taktsang in Bhutan in order to bring the local deities and guardians under his control.

In the iconography of Dorje Drolo, we will learn about his body posture, hand and leg gesture, and different representations of Dorje Drolo in thangka and statue.

Dorje Drolo is fearsome in form. Dorje Drolo is dark brown in color. He has one face, three-round staring eyes, and curly dark yellow hair with the orange mustache, beard, and eyebrows.

Dorje Drolo is adorned with bone earrings and a necklace of freshly severed heads. He wears various colored robes in the style of both a layman and a monk along with ornate felt boots. Dorje Drolo bent the right leg and the left extended.

He stands atop a fierce tigress emanation of the consort Mandarava, while surrounded by the bright orange and red flames of pristine awareness. 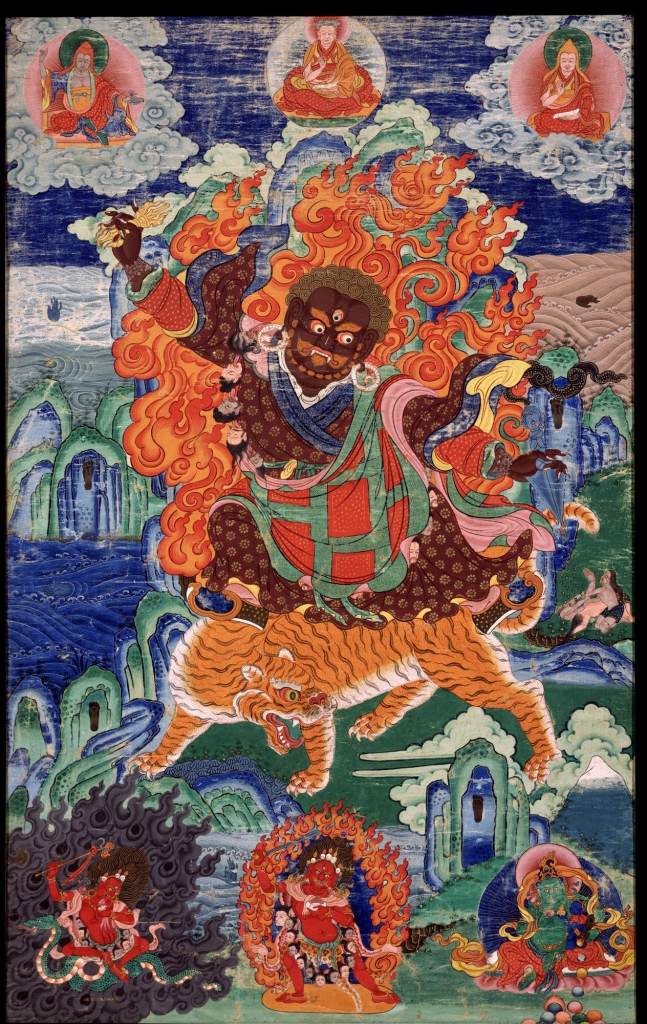 By depicting this thangka, we are going to learn about the presentation of Dorje Drolo with different deities such as 4th Dodrag Rigdzin Pema Trinle, Acharya Shantigarbha, Acharya Vairochana, Shaza Khamoche, and Green Jhambhala, etc.

Acharya Shantigarbha is seated in a relaxed posture.

Lhamo Remati red in color with one face and two hands holding a sword and skullcup, standing, surrounded by flames.

The size of the painting is 60.96*40.64cm. Ground mineral pigment on cotton and the fine gold line is used to color this painting. Presently, this thangka is in the Rubin museum of art.. 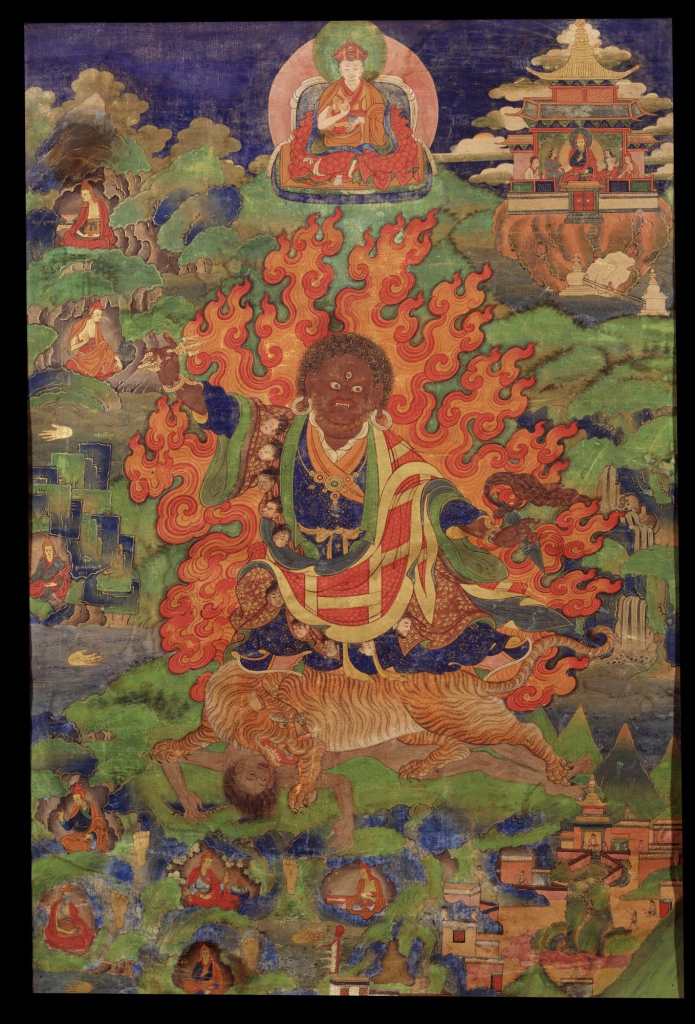 This painting belongs to a set of nine paintings illustrating the principal form of Padmasambhava along with the eight special forms relating to eight special periods and events in his life.

By depicting this thangka, we are going to learn about the presentation of Dorje Drolo with Shmashana Adhipati and Yellow Jambhala. 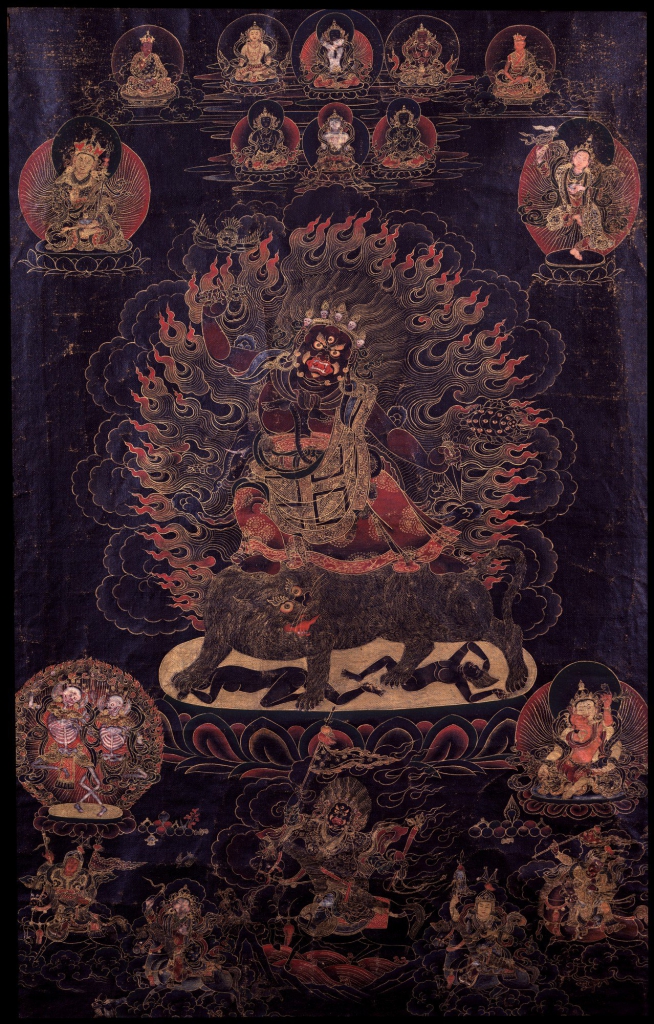