Interpreting of Wheel of Life

The wheel of life is a symbolic representation of cyclic existence found on the outside walls of Tibetan Buddhist temples and monasteries in the Indo-Tibetan region. This pictorial thangka presents basic Buddhist concepts such as karma and rebirth in a manner that can be understood by uneducated or illiterate people.

Alternate translations for Bhavacakra include the Buddhist wheel of life, wheel of cyclic existence, wheel of becoming, etc.

The Viability of the wheel of life

In this segment, we will learn about the viability of the wheel of life. After that Short etymological description of the word Wheel of life itself.

Etymology of the wheel of life

Iconography of the Wheel of Life

Posture of the wheel of life

Wheel of Life is held in the tight grasp of Samsara personified seen as a fierce wrathful figure who is red in color with one face and two hands.

The circular disc is pressed up against the mouth ready to be swallowed at any moment the immediacy of impermanence.

This wrathful figure is sometimes referred to as Yama who is known as the Lord of Death and at other times as the red female daemon of death possibly Yami the sister of Yama.

By depicting this thangka, we will learn about first, second, third, and fourth bonds.

They are often shown biting on each other’s tail.

The next circle is the second one which is made of a white half and a black half shows. Those individuals that have performed meritorious actions moving upwards in the circle of existence.

And those individuals who have performed bad actions moving downward, naked, led by red and green attendants of the Lord of Death.

The widest of the bounds is that of the six realms of existence god, asura, human, animal, the ghost, and hell. Each segregated by a red dividing.

At the top of the bound, there is the Realm of the Gods highlighted by a heavenly being, the god Shakra, in a palace playing a stringed instrument.

Some traditions explain that the god Indra depicted in this way is an emanation of Shakyamuni Buddha.

To the right of the bound, there is the Asura Realm who is called a lower form of the gods that are always engaged in conflict.

To the left of the bound, there is the Human Realm and below that is the Animal Realm.

This form of Yama is not the same entity as the Buddhist Tantric protector Yama Dharmaraja. Yama in the hell realm holds a mirror to reflect those actions performed by each individual that comes before him.

In each realm, the various beings are portrayed engaged in their respective activities along with the occasional buddha or bodhisattva.

The outer circle is composed of 12 scenes that represent the Twelve Links of Dependent Arising starting at the bottom left with three blind figures and then moving clockwise around the Wheel of Existence to meet again at the bottom right where two figures carry bundled corpses to the funeral pyre.

Yama the Lord of Death, although portrayed in the Hell Realms, actually resides in the Realm of Ghosts and is the King of the Pretas.

He lives in the city of Pretas, Kapila, 500 miles below the classical north Indian city of Rajgir and is accompanied by thirty-six attendants.

His association with the Hell Realms is in the capacity of a judge of karma, good and bad deeds. This model of Buddhist cosmology the environment and inhabitants is based on the Abhidharma literature of the Theravada and Sutrayana vehicles.

Within the Vajrayana system, various divergent models are presented with the foremost being that of the Kalachakra Tantra.

This thangka is from Eastern Tibet. Wheel of Life with Sakyamuni Buddha was painted around 1700-1799 AD. The size of this painting is 60.33×42.24cm. The base of the painting is cotton and the ground mineral pigment and fine gold is used to color it. Wheel of life belongs to Uncertain Lineage. This Masterpiece Thangka Art is still preserved and kept in the Rubin Museum of Art.

By depicting this thangka we will learn the representation of Wheel of life. 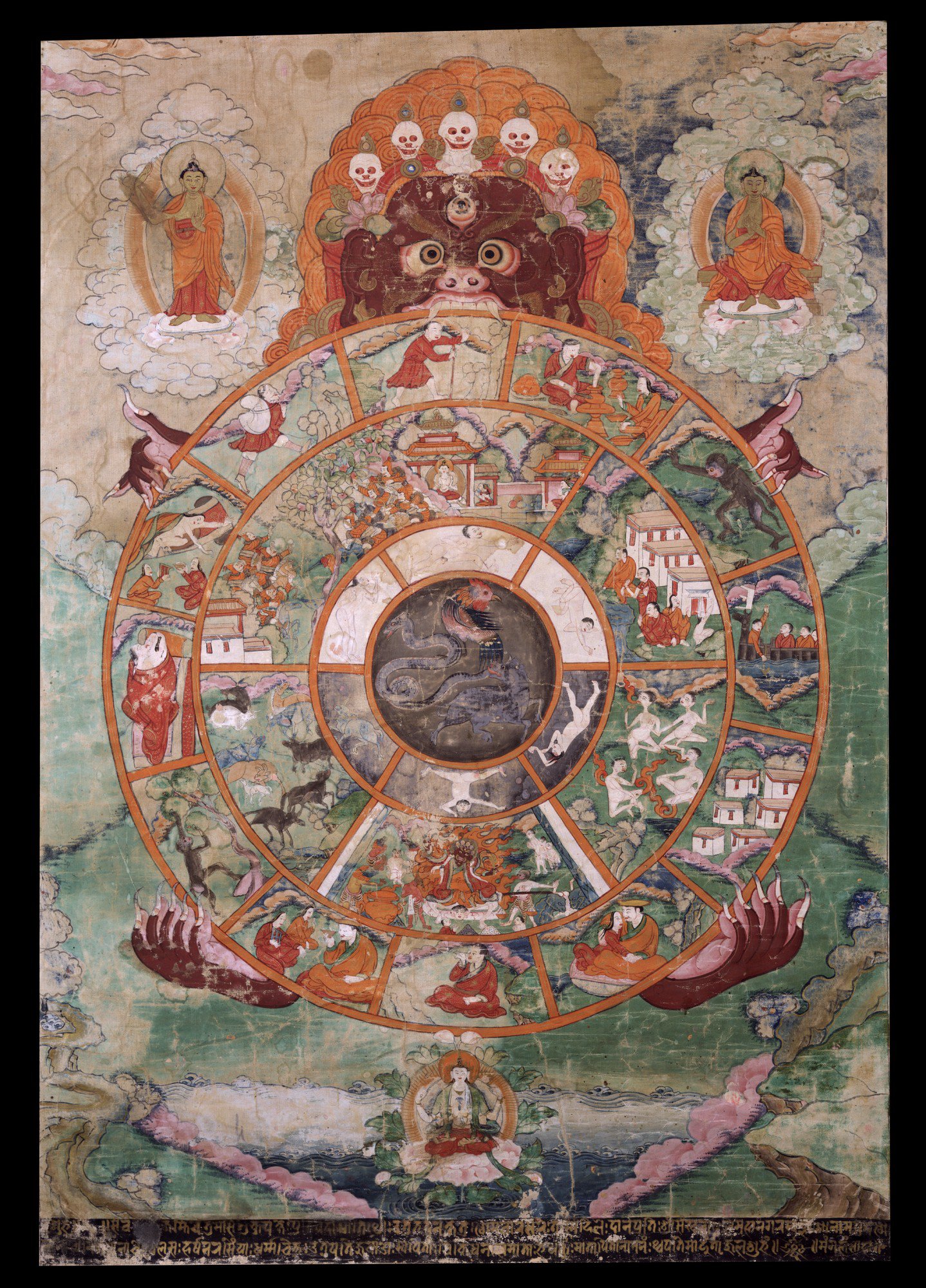 The large red figure of a personified Samsara who is wrathful with one face and two hands.