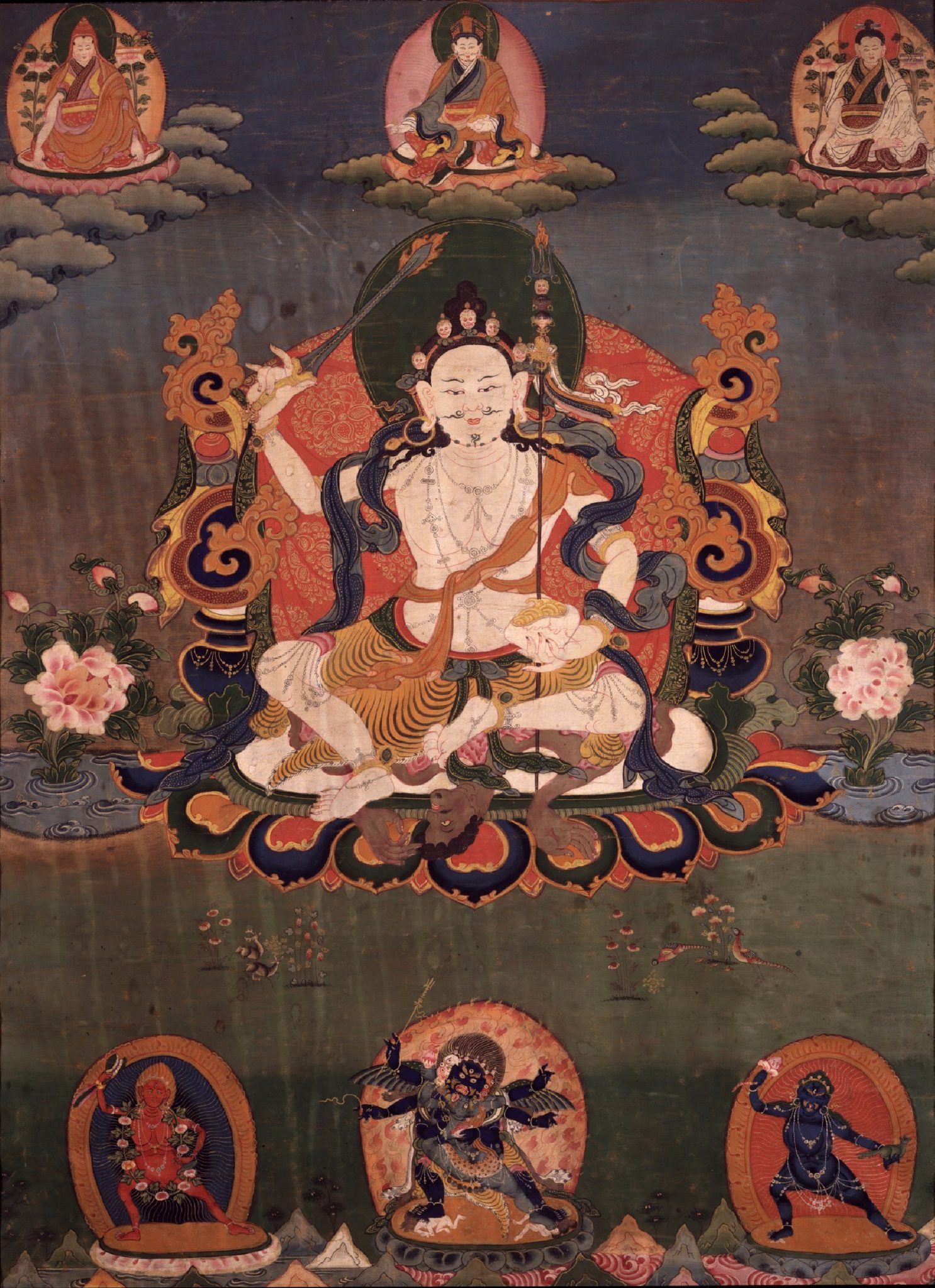 This 19th-century painting depicts the central figure of Do Khyentse Yeshe Dorje with previous Nyingma masters above. 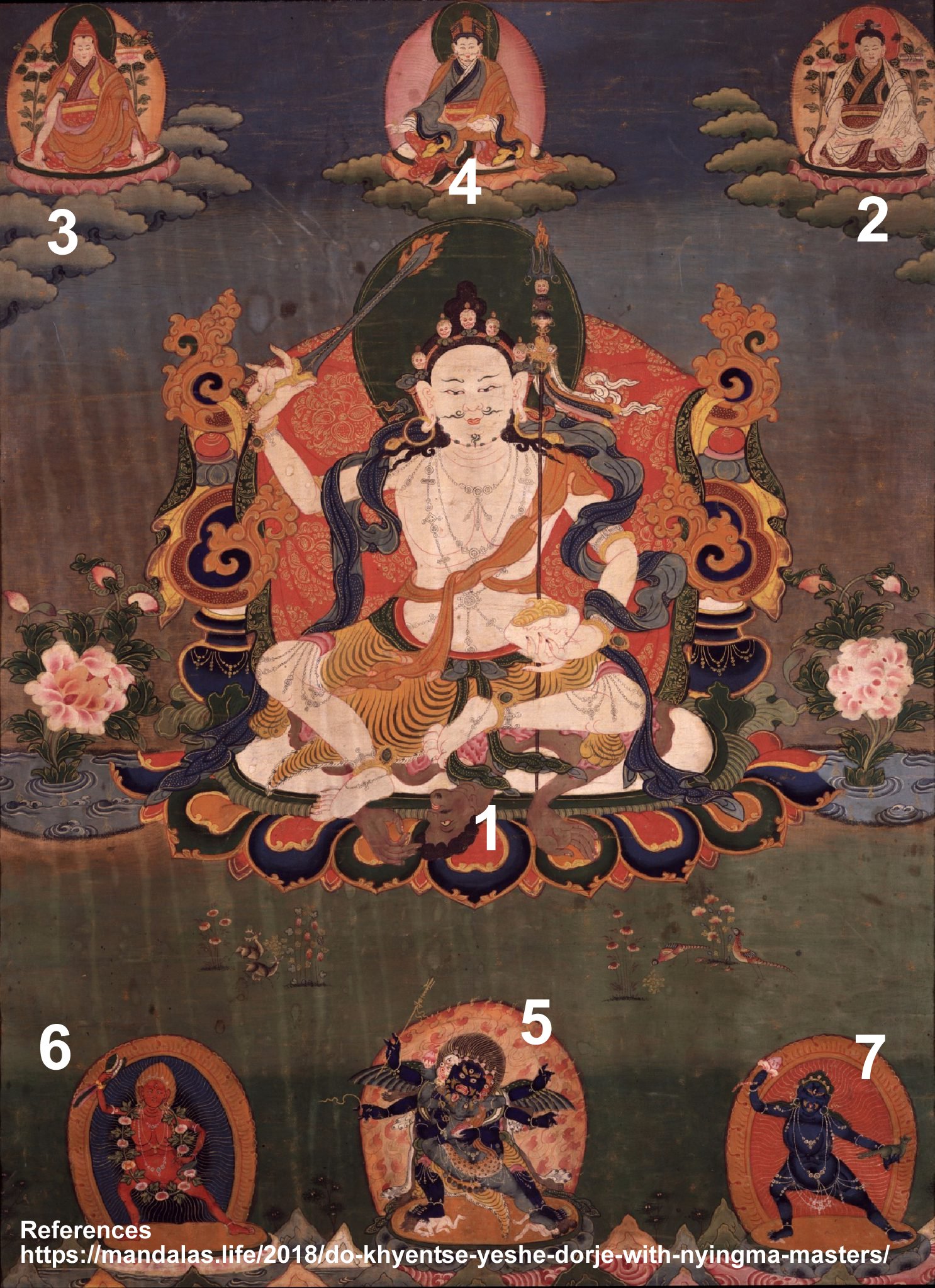 Do Khyentse Yeshe Dorje was born in 1800 in the Golok region of Amdo to nomadic parents. His father was Chokor Sonampel of the Golok Akyong clan, and his mother was Tsewang Men of the Dawaclan.

The First Dodrubchen Jigme Trinle Oser, who would become his main teacher, and the Second Dzogchen Ponlop Pema Sang-ngak Tenzin, both recognized him as the mind emanation of Jigme Lingpa.

Soon after the recognition his parents moved him to Dodrubchen’s encampment, later also following him to Dzogchen monastery and to the Dege court.

Jigme Lingpa (1730–1798) was a Tibetan tertön of the Nyingma sect of Tibetan Buddhism.

He was the promulgator of the Longchen Nyingthik, the Heart Essence teachings of Longchenpa, from whom, according to tradition, he received a vision in which the teachings were revealed.

The Longchen Nyingthik eventually became the most famous and widely practiced cycle of Dzogchen teachings.

Longchen Rabjampa, Drimé Özer, commonly abbreviated to Longchenpa (1308–1364), was a major teacher in the Nyingma school of Tibetan Buddhism.

Along with Sakya Pandita and Je Tsongkhapa, he is commonly recognized as one of the three main manifestations of Manjushri to have taught in Central Tibet.

His major work is the Seven Treasuries, which encapsulates the previous 600 years of Buddhist thought in Tibet.

Longchenpa was a critical link in the exoteric and esoteric transmission of the Dzogchen teachings. He was abbot of Samye, one of Tibet’s most important monasteries and the first Buddhist monastery established in the Himalaya, but spent most of his life traveling or in retreat.

Despite the many layers of the legend that have accreted around Padmasambhava, scholars generally agree that a renowned Indian tantric master by that name did visit and teach in Tibet in the late eighth century.

Our earliest evidence for his activities comes from several tenth-century manuscripts found in the so-called “library cave” of Dunhuang.

Pelliot tibétain 44 is a small booklet devoted to the tantric deity Vajrakīla. It describes the master’s time in India and Nepal prior to his trip to Tibet.

According to this account, he gathered the texts and performed the rites for The Hundred Thousand [Verse] Tantra of Vajrakīla at the Asura cave in Yanglesho, Nepal.

During this same period, he is also said to have tamed four troublesome goddesses and bestowed upon them new Buddhist names.

On gaining accomplishment in the practices of Vajrakīla, the master then performed a series of miracles, including the magical diversion of a stream for irrigation purposes.

Heruka is the name of a category of wrathful deities, enlightened beings in Vajrayana Buddhism that adopt a fierce countenance to benefit sentient beings. In East Asia, these are called Wisdom Kings.

Heruka represents the embodiment of indivisible bliss and emptiness. They appear as Istha-devata or meditational deities for tantric sadhana, usually placed in a mandala and often appearing in Yab-Yum.

Yumka Dechen Gyalmo (Tib. ཡུམ་ཀ་བདེ་ཆེན་རྒྱལ་མོ་) the peaceful dakini practice from the Longchen Nyingtik, the terma revelation of Jigme Lingpa. She is a form of Vajrayogini.

Tulku Thondup explains that Yumka Dechen Gyalmo is a sadhana practice on Yeshe Tsogyal, the consort of Guru Rinpoche, as a wisdom dakini.

It is one of the three roots practice of the Longchen Nyingtik together with Lama Rigdzin Dupa and Yidam Palchen Dupa.

In 1774 the omniscient Jigme Lingpa visited the Tsogyal Lake. There, amid wondrous signs, he beheld the face of the Wisdom Dakini. He also received the symbolic scripts which he deciphered in order to produce the practice text.

Ekajati is, along with Palden Lhamo deity, one of the most powerful and fierce goddesses of Vajrayana Buddhist mythology.

According to Tibetan legends, her right eye was pierced by the tantric master Padmasambhava so that she could much more effectively help him subjugate Tibetan demons.