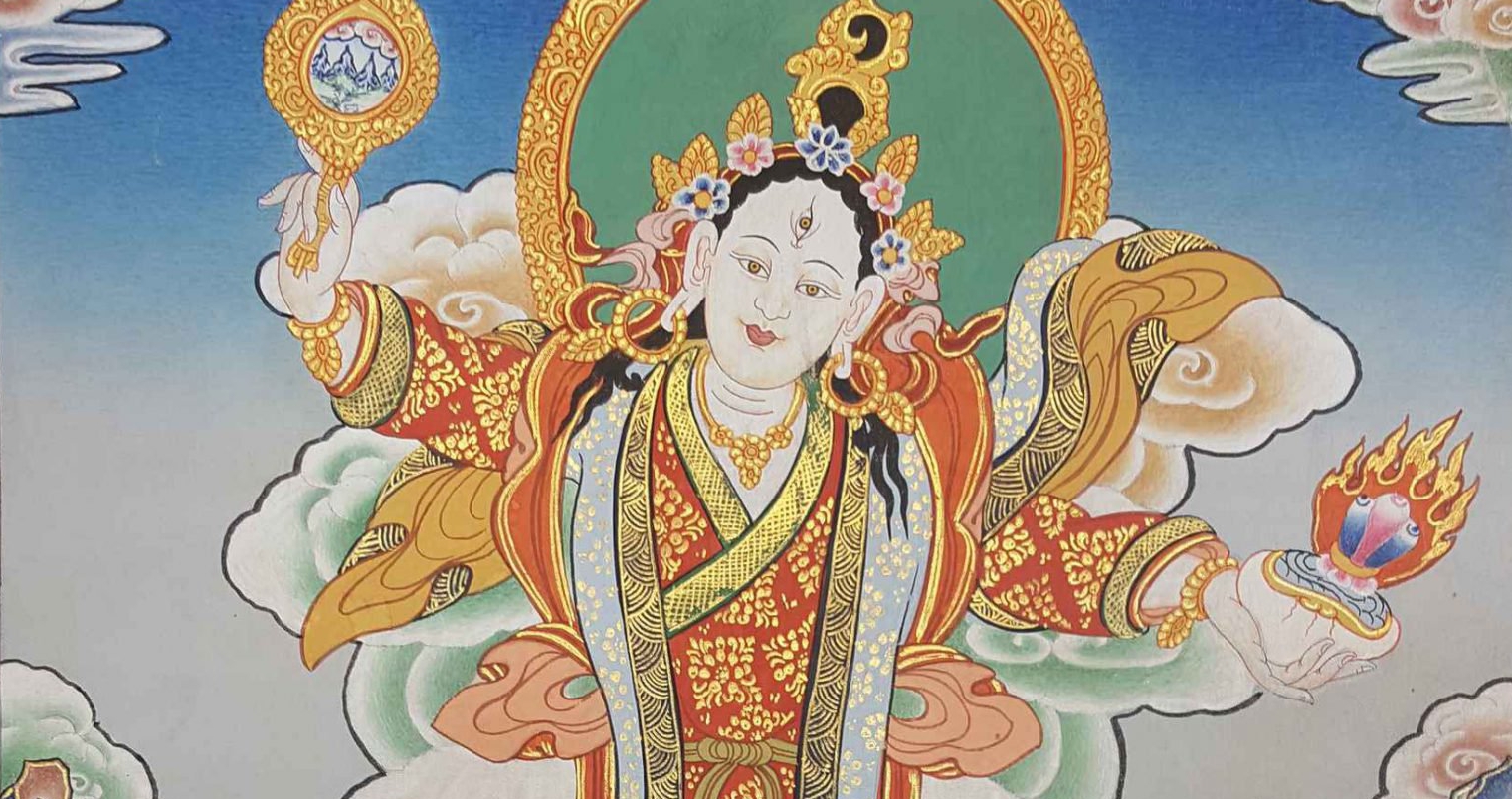 Mandarava is also known as The Long Life Dakini Mandarava. Mandarava was the virtuous, and beautiful princess daughter of the royal couple in Zahor.

Mandarava is also known as, Machik Drubpai Gyalmo, Pandaravasini. She is along with Yeshe Tsogyal. She is one of the two principal consorts of great 8th century Indian tantric teacher Padmasambhava, a founder-figure of Tibetan Buddhism, described as a ‘second Buddha’ by many practitioners.

Although Mandarava’s loving parents fulfilled her every wish, as she grew up she was moved by the inevitability of suffering in samsara. She asked for her parents’ permission to devote her life to religious practice, and they consented on the condition that she remain in the palace.

In the upper chambers of the palace, Mandarava dedicated herself to studies until she became the greatest scholar in the land. She studied literature and composition, all the languages and dialects of eastern and western India, and poetics, logic, grammar, chanting, medicine, and astrology.

By the age of thirteen, Mandarava had mastered all the sciences.

She studied the Four Noble Truths and took the bodhisattva vows with the master Vimalaprajna. She inspired all of her palace maidens to enter the religious path.

Mandarava and her Marriage

However, her father would not assent to her request to become ordained as a Buddhist nun. Kings from every direction arrived requesting Mandarava’s hand in marriage and Mandarava’s father demanded that she marry one of them.

One day, Padmasambhava manifested before them and taught them all the Vajrayana teachings. When the rumor of Padmasambhava’s residence in Mandarava palace reached the king, he became enraged that a commoner was involved with his daughter after she had refused marriage to all the neighboring kings.

He ordered to have Mandarava imprisoned in a pit and Padmasambhava burned alive. Instead of being burned, Padmasambhava transformed the funeral pyre into a lake of sesame oil, surrounded by a ring of fire in the middle of which bloomed a huge lotus flower on which he was seated amidst rainbows and clouds.

Realizing Padmasambhava was a manifestation of a Buddha, the king repented his negative behavior and appointed Padmasambhava as king of the land of Zahor. Padmasambhava and Mandarava taught the dharma to all in the land.

Enlightenment in Maratika Cave in Nepal 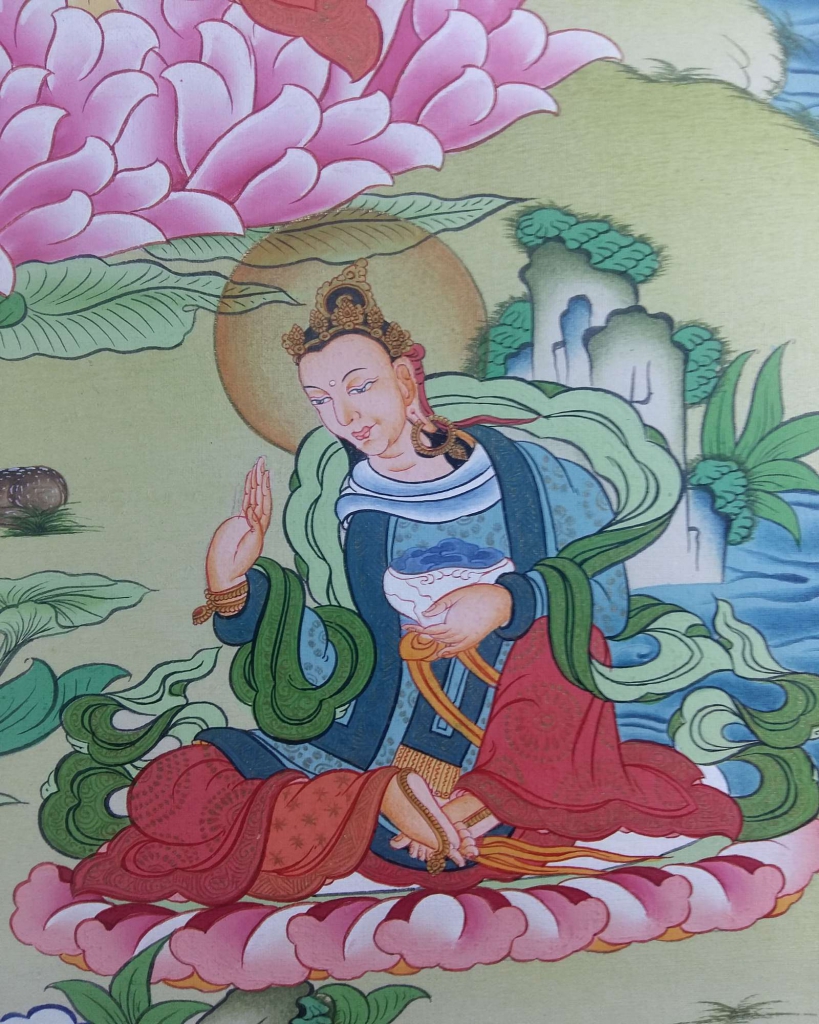 Mandarava attained full enlightenment alongside Padmasambhava in the famed Maratika Cave in Nepal. She was a fully realized spiritual adept, a yogini, and a spiritual teacher.

Mandarava accompanied Padmasambhava to Maratika Cave, where they perfected longevity practices pertaining to the union of Hayagriva and Vajravarahi.

They achieved ‘eternal life,’ which refers here to the unchanging realization of the ultimate nature of mind and phenomena.

On their return from Maratika, they subjugated heretics in the kingdom of Kotala. Mandarava withstood being raped and beaten by wrathful demons in the Yongdutsel charnel ground and was able to overcome and convert them.

She tamed the cannibals in the land of Camara and brought them to practice the dharma. She displayed miracles in eight other charnel grounds, taming the wrathful beings in each and converting them to the dharma.

When she returned home, Mandarava taught the dharma for one year. Then she went with Padmasambhava to the kingdom of Oddiyana. However, Princess Prabhadhara was jealous of Mandarava and raised doubts about Padmasambhava with her father, King Indrabhuti.

Although the king ordered to have Padmasambhava and Kotala burned to death, they transformed the fire into a lake and aroused the devotion of all, until everybody in the land of Oddiyana attained the rainbow body.

Kotala then traveled to Shambhala to fulfill Padmasambhava’s command to subdue beings there.

When she had completed all of her beneficial activity, it was time for her to depart from this world. Her body became invisible and then manifested as a sphere of light, filling the entire sky. She departed to the Akanista Paradise of Padmavyuha and arose as the supreme secret consort of primordial wisdom.

Chapter 16 of the Lotus Sutra mentions,

“Mandarava blossoms rain down, scattering over the Buddha and the great assembly.”

As spiritual practitioners, we receive encouragement and inspiration by reading the life stories of great and sublime teachers, and the inspiration we receive from their exemplary lives allows us to progress more swiftly along the path to liberation.

Because the appearance of everything we can know and experience depends on causes and circumstances, ordinary individuals embarking on the path must do so through a gradual process.

Princess Mandarava, however, already liberated from the cycle of suffering and perfectly omniscient, was not an ordinary individual.

She intentionally emanated into realms of ordinary existence in order to inspire beings and lead them through this gradual process, teaching them how to practice through her example.

The accounts of Mandarava’s remarkable lives illuminate the experiences of a great wisdom dakini who inspired everyone she met, turning their minds irrevocably toward liberation.

The Lives and Liberation of Princess Mandarava

In the thirty-eight chapters of this revelation [‘The Lives and Liberation of Princess Mandarava‘ is a treasure of Padmasambhava], one comes to know a nirmanakaya (emanated manifestation) dakini who chose numerous times to enter the world as an aristocrat.

The purpose of this depiction is not to show us that only those of high status or wealth are fortunate enough to have such opportunities, but to reveal that Mandarava was able and willing to renounce that which is most difficult to renounce, namely attachment to the so-called pleasures of worldly life.

In each of her lifetimes, she unflaggingly forsakes fame and pleasures to work for the benefit of others through example and skillful means. Her abandonment of the temporary pleasures that steal away precious time and opportunities for spiritual development mirrors the struggles facing modern-day Dharma practitioners.

Although Mandarava was a famous female practitioner, she ultimately defies gender distinctions, and her enlightened activities are timeless. The Dharma that Mandarava – and all sublime teachers like her – teaching is the path that transcends all relative distinctions made by ordinary individuals based on the ordinary habits of dualistic mind.

The notion that Vajrayana Buddhism is male-oriented is misleading. Still, many women attempting to pursue the path may naturally become discouraged when they encounter strong Tibetan cultural influence.

The more Dharma takes root in the West, however, the easier it becomes to relate directly to the Dharma, which is perfectly pure and free from biased distinctions, rather than focusing on the habits of ordinary individuals from foreign cultures. 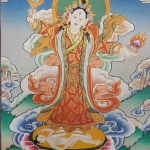 Mandarava Thangka Painting is hand-painted in Bhaktapur Nepal. It is believed that having Mandarava in your hoe will grant long life to your family members.
Buy Mandarava Yogini Thangka