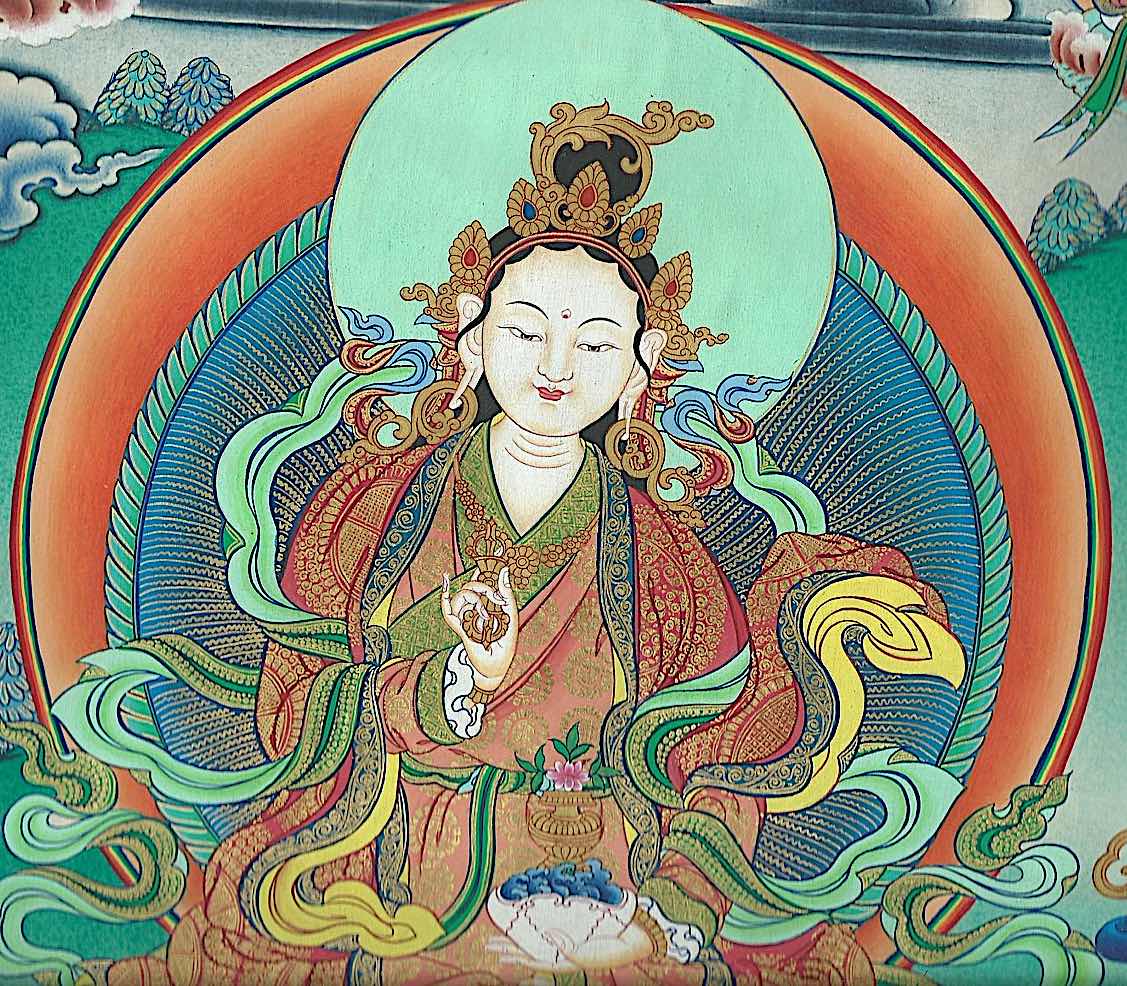 Born a princess in the region of Kharchen, Tibet, in about 777CE, she lived for approximately 99 years and is a preeminent figure in Tibetan Buddhism and a role model for contemporary spiritual practitioners. Although often referred to as being Padamasambhava’s main consort, she was primarily a spiritual master and teacher in her own right.

Based on her spiritual accomplishments, the Nyingma and Karma Kagyu schools of Tibetan Buddhism recognize Yeshe Tsogyal as a female Buddha. The translators of Lady of the Lotus-Born, the Namtar, or spiritual biography, that Yeshe Tsogyal left as a terma, observe:

As Dodrup Tenpai Nyima makes clear, beings able to reveal Termas must have at least the realization of the Perfection Stage practices. On the other hand, the one who originates the Treasures must have the supreme attainment of Buddhahood. Lady of the Lotus-Born is thus a testimony of Yeshe Tsogyal’s enlightenment.

“If you know me, you know that I reside in the hearts of all beings. Just summon me and I will return!”

“Now until the dualistic identity mind melts and dissolves, it may seem that we are parting. Please be happy. When you understand the dualistic mind, there will be no separation from me. May my good wishes fill the sky.” 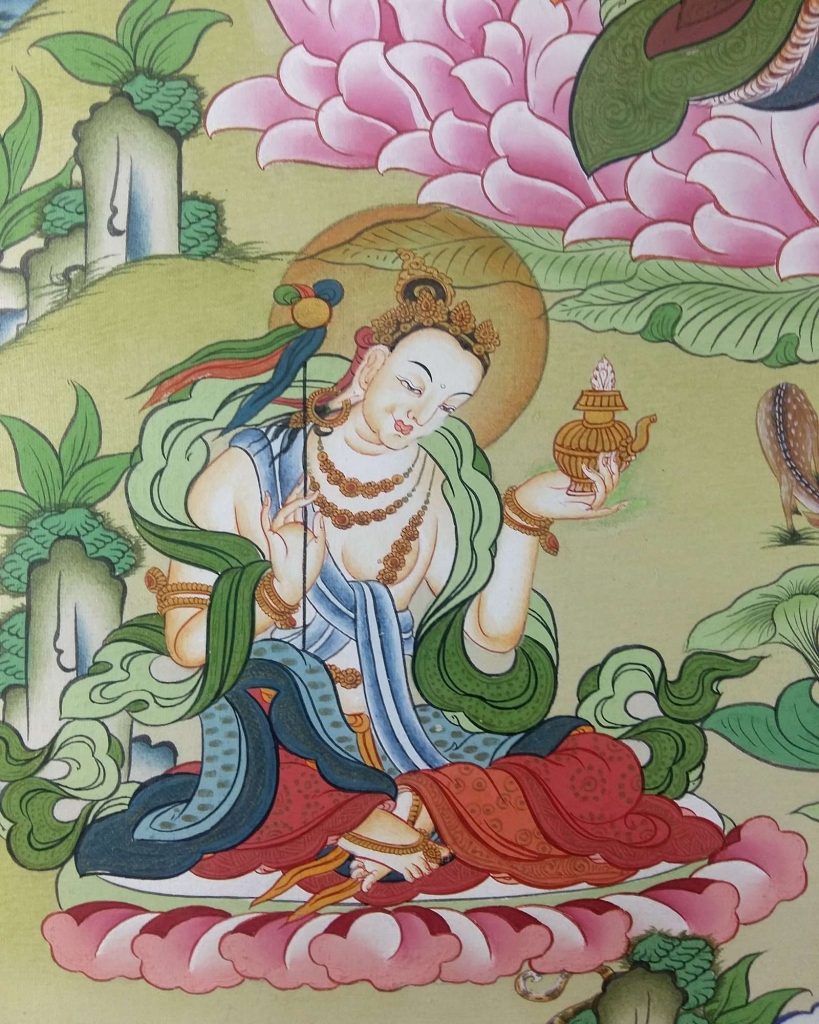 “When remarkable human yoginis are described as wisdom dakinis, they are depicted as having the three bodies of enlightenment, suggesting that they may be considered female buddhas.  Most subtle is the formless, empty expanse that is the nature of the mind itself (dharmakaya, choku).  Second is the meditational deity internalized by the tantric practitioner who manifests the dynamic wisdom inherent in the mind, expressed as the visionary form of a semi wrathful or wrathful dakini (sambhogakaya, longku).  The other expression of the dakini refers to the many forms in which the dakini appears, human and visionary, peaceful or wrathful, the embodied dakini herself (nirmanakaya, tulku).

Yeshe Tsogyal, the great Tibetan yogini, is supplicated in this way in her ritual from the Longchen Nyingthik tradition:

In the center of that palace, Upon the pistil of a blooming lotus On a sun-seat is the chief of the dakinis, [Who is] Samantabhadri in the vast expanse of dharmakaya, Vajravarahi is the field of sambhogakaya and Yeshe Tsogyal in the form of nirmanakaya.

The queen of Trisong Detsen 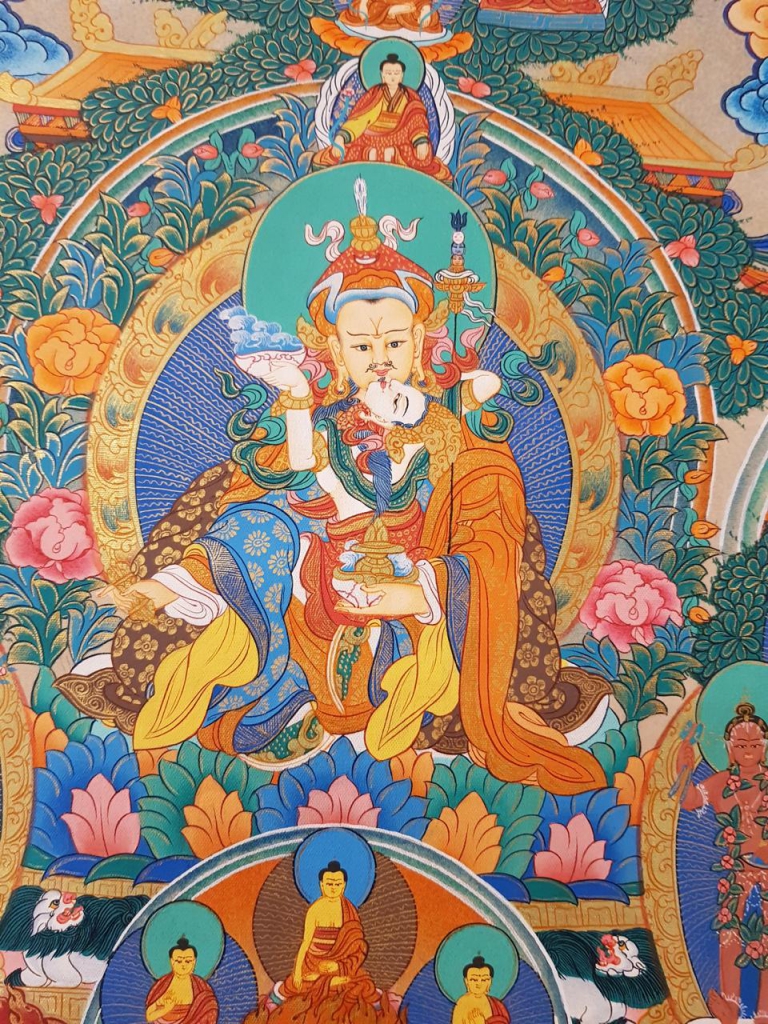 On an embodied level, Yeshe Tsogyal was a historical figure, the queen of Trisong Detsen, the king of Tibet (742-776 C.E.) at the time of the introduction of Buddhism.  She became one of the primary consorts of Padmasambhava, Guru Rinpoche, who began the first diffusion of Buddhism in Tibet, and she was responsible for the transmission of many early Nyingma teachings.  Because she was a wisdom dakini, it was recognized that her outer manifestation was closely related to these other two dimensions.  In her famous biography, she is lauded shortly after her birth in this way:

Nature of the dharmakaya, Samantabhadri of great bliss, Vajrayogini, sambhogakaya dakini, Nirmanakaya, supreme mother of all Buddhas, To you all happiness and fortune!

Dharmakaya dakini, an abyss of Voidness, Sambhogakaya, Sarasvati, mother of Buddhas in the triple time, Nirmanakaya, supreme and perfectly endowed, To you the victory!

Dharmakaya, the expanse of Primal Wisdom, Sambhogakaya, mother of exalted ones, white Tara of the seven eyes, Nirmanakaya, supreme among the living, To you, we bow!

In this supplication, her embodied form is acknowledged as extraordinary, for she is called Mother of Conquerors, of buddhas, supremely qualified and supreme among humans.  This signifies that she, an inherently enlightened one, surely will again become enlightened in this human birth as the woman Yeshe Tsogyal. 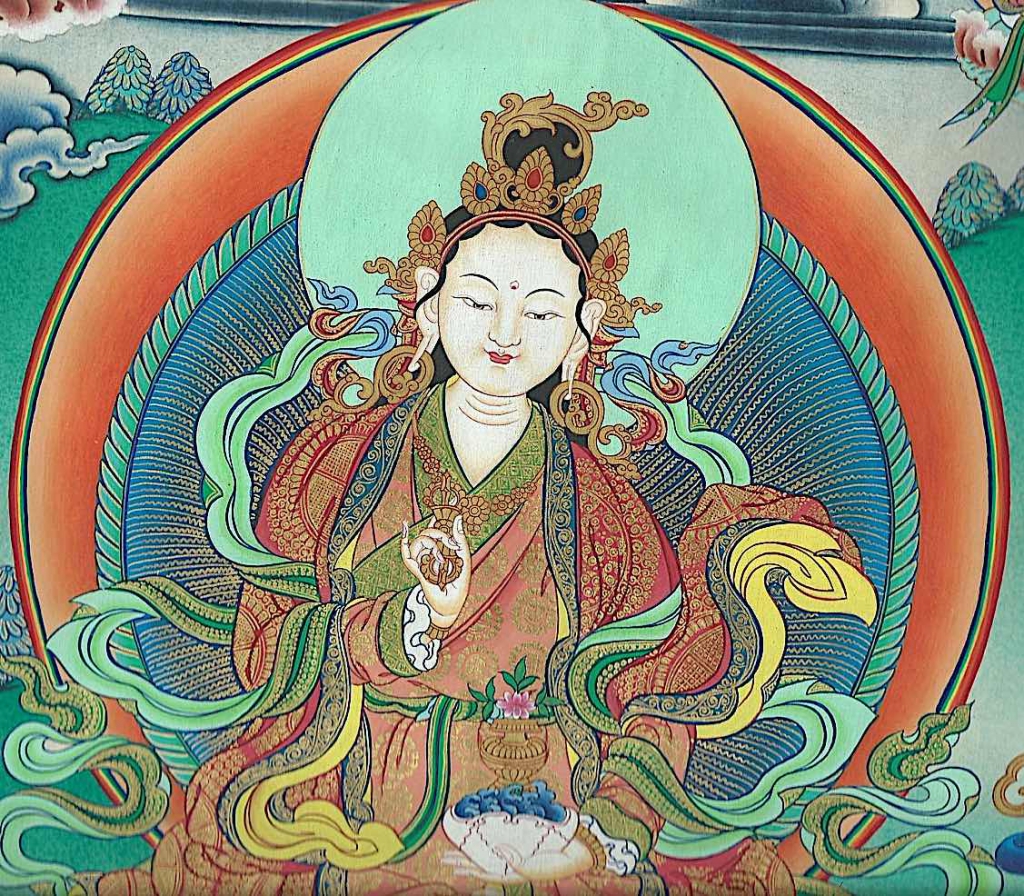 As for her inner dimension, Yeshe Tsogyal was remarkable because she was not merely a mortal; in her dynamic nature she was a tantric Buddhist meditational deity.

She is called Sarasvati (Yangchenma), the great female bodhisattva of learning, culture, and music, the peaceful consort of Manjushri, who carries a lute that serves as her symbol.

Sarasvati is also called Vakisvari, (Ngawang Lhamo) or ‘lady of speech’ for her connection with seed syllables, music, utterance, and poetry.

She is the dakini of the mirror-like wisdom and the ‘white-cloaked lady’ (Ko Karmo) who is dakini of inner heat in the yogic practice of tummo.  It is said that Yeshe Tsogyal was Sarasvati in her previous life.

Yeshe Tsogyal is also considered a manifestation of Saraswati and sometimes identified with the Buddha Tara.

She is also considered to be an emanation of Samantabhadri, Prajnaparamita, and Vajrayogini.

All of the important figures in Tsogyel’s life were to be reborn in the life of Machig Labdron, including Padmasambhava himself, who would become Dampa Sangye.

Yeshe Tsogyal in her visionary dimension was the radiant White Tara (Drolma Karmo) the savior who, with her compassionate seven eyes, attends to the health and welfare of beings in all quarters.

Yeshe Tsogyal as Vajrayogini or Vajravarahi

In another manifestation, she was Vajrayogini or Vajravarahi, who are two aspects of the most important dakini in the Tibetan tantric system.

Vajrayogini is a semi-wrathful deity, depicted as red and dancing, wearing bone ornaments; she is the most expressive of the qualities of wakefulness, the personification of the wisdom-mind itself.

In her alternate identity as Vajravarahi, she is the ‘Vajra Sow,’ the manifestation of the nonconceptual quality of the mind, who severs though with her hooked knife.

In her most subtle, essential form, Yeshe Tsogyal is called ‘expanse of mahasukha Kuntusangmo [Samantabhadri], the all-good queen.’

This deity is called the primordial Mother Buddha, source of all enlightenment.  She is the consort and female counterpart of Samatabhadra (Kuntusangpo), the primordial buddha of the Nyingma school, who represents the formless space of wisdom, the dharmakaya dimension of Buddhahood in whom delusion and conceptual thought have never arisen.

Samantabhadra is depicted as blue, the color of the sky, a reminder that his nature is limitless and formless as the sky.

The feminine Samantabhadri is depicted as white and is the primary symbol of the awareness-wisdom aspect of the mind.  Both are naked and unadorned, just as the mind and awareness always are in their essence.  But it is Samantabhadri who is the expression of limitless space, the natural state that is the ultimate truth.

Samantabhadri is the expression of that which cannot be expressed in words or symbols, the ultimate nature of mind, the limitless expanse of simplicity.

All meditation practices in the Vajrayana tradition eventually point to this transformative experience.  This is the secret of the power of the dakini, and it is to this point that she points in all her manifestations.

‘Though primordially we are not separate, not recognizing me, you experience me externally.’ 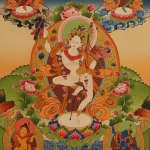