Dalai Lama and Tsangyang Gyatso were painted in the tsal tang style. The thangka of Dalai lama ad Tsangyang Gyatso has a red background with a gold outline. The composition includes the hand and footprints of the Sixth Dalai Lama. 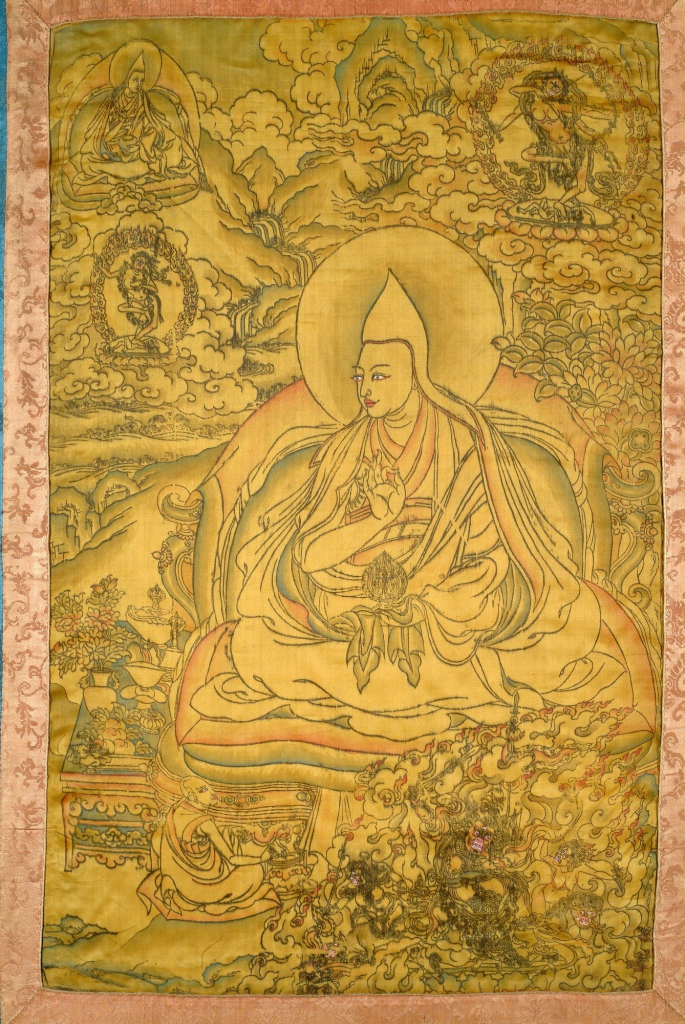 In the 1680s Sanggye Gyatso dispatched search parties of lamas who were not explicitly told for whom they were searching, and he traveled himself on occasions, to find the reincarnation of his beloved teacher. His account of the discovery, couched in highly metaphorical literary terms, shows his emotional deep investment in his search and his confidence in the young boy’s identity.

Following his discovery in 1688, Tsangyang Gyatso was kept under what amounted to house arrest in Tsona (mtsho na), far from Lhasa. The treatment of his family in Tsona was such that his mother later initiated an ultimately unsuccessful case against Sanggye Gyatso. He was initially recognized as the reincarnation of the abbot of Zhalu (zhwa lu) monastery, and only formally recognized as the Dalai Lama in 1697, when it became impossible for Sanggye Gyatso to conceal the death of the Fifth Dalai Lama.

That year, he was then brought to Lhasa and enthroned, receiving his novice vows from the Second (or Fifth) Panchen Lama Lobzang Yeshe (paN chen bla ma 02 blo bzang ye shes, 1663-1737). 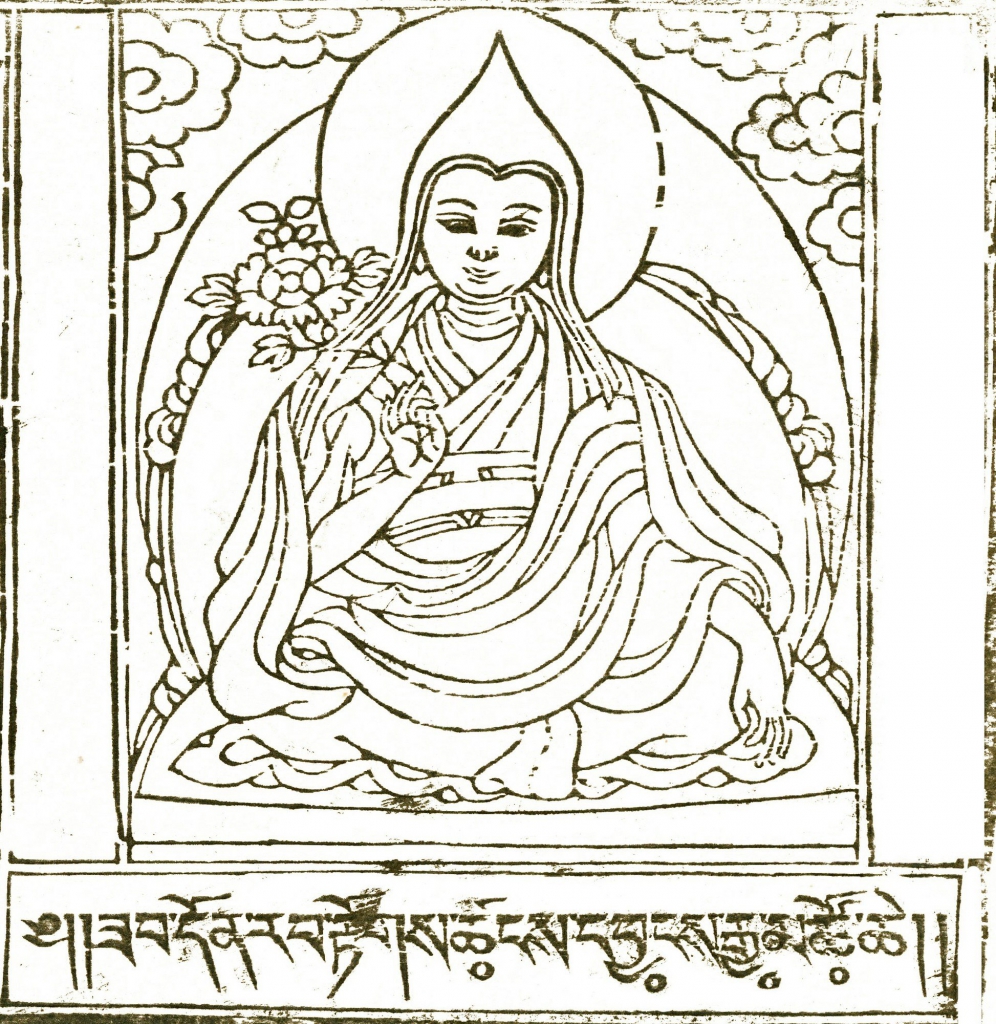 The political situation in Tibet at the turn of the seventeenth century was extremely delicate, with the Mongol Qoshud, led by Lhazang Khan (1677-1717), and the Manchu Qing under Emperor Kangxi (r. 1661-1722), vying for overall control.

The Fifth Dalai Lama had only recently unified the political power of the Gelug tradition in Lhasa, where he also started the building of the Potala as the focus of this power, and the quixotic behavior of his reincarnation who was clearly disinterested in politics and whose spiritual affiliation was to the Nyingma as much as to the Gelug – rendered this power, and thereby his own position and that of his regent Sanggye Gyatso, somewhat fragile.

In 1705, Lhazang Khan had the regent killed, and thus exposed the Dalai Lama’s position. Although the Geluk hierarchy and the Tibetan people continued to support Tsangyang Gyatso, the Mongol Qoshud took control of Lhasa. (The situation was only resolved in 1717, when, at the behest of Tibetan authorities, Dzungar Mongols invaded Lhasa and killed Lhazang.) The Dalai Lama himself, despite his complex relationship with Sanggye.

Gyatso, responded in part to this new situation by refusing to accept full ordination from the Panchen Lama. Moreover, he insisted also on returning his novice vows. The religious hierarchy, however, reacted with horror to this decision, and the Panchen Lama invited him to Tashilhunpo (bkra shis lhun po), where he led a group of the Gelug hierarchy in petitioning Tsangyang Gyatso to rethink his stance.

Tsangyang Gyatso, however, no longer now under the control of Sanggye Gyatso, stood firm and, when pressed, stated that were his decision not to be accepted, he would commit suicide in front of Tashilhunpo. At this threat, the Panchen Lama backed down and accepted the return of the Dalai Lama’s vows, and thus Tsangyang Gyatso became the first and only Dalai Lama to live as a layman. Beyond the Panchen Lama’s great distress, we have little explicit information as to how the remainder of the Gelug establishment reacted to this turn of events.

The popular image of the Sixth Dalai Lama is of a poet and libertine, fond of alcohol and of the brothels in the village of Shol (shol) to the south of the Potala. Poems ascribed to him were collected into two texts, of which the shorter (tshangs dbyangs rgya mtsho’i mgu glu) has been frequently translated into English. Both this text and the longer text (tshangs dbyangs rgya mtsho’i gsung mgur) consist of brief popular lyrics (gzhas) on the themes of love, the natural world, and spiritual life. There is, however, no firm evidence for the ascription of these poems to Tsangyang Gyatso.

The Dalai Lama’s decision to renounce his monastic vows led some officials to challenge his identity as the reincarnation of Ngawang Lobzang Gyatso. On June 28 1706 Lhazang Khan seized his opportunity and presented a boy of his own, Ngawang Yeshe Gyatso (ngag dbang ye shes rgya mtsho) as the true Sixth Dalai Lama, whom he installed in the Potala while placing Tsangyang Gyatso under arrest. At the behest of Lhazang Khan, Tsangyang Gyatso was “invited” to the Imperial Palace in Beijing.

Despite protests by Tibetan monastics and laypeople, he was taken from his prison in Lhasa under guard to China. However, the final definitive information which we have about his life is that his party camped at Kokonor in Amdo. From this moment, there are two alternative histories available to us, which are both offered as an explanation of why his body was never recovered and returned to the Potala.

The demise of 5th Dalai Lama

The Dalai Lama presented in this alternative history presents a character quite different from the more popular version. He is a dedicated and serious practitioner, who takes on the rebuilding of Jakrong (jag rong) monastery in Alashan, in modern Qinghai province. This text contains a mixture of stories which appear fantastical, such as an account of Tsangyang Gyatso’s appearance at the enthronement of the Seventh Dalai Lama in Lhasa in 1720, and detailed and prosaic descriptions of events, such as his attempts to rebuild Jakrong monastery in the face of Chinese opposition.

In Alashan, according to the secret biography, one of the Sixth Dalai Lama’s principal patrons was Gushri Khan’s grandson Abo who, with his wife, also became one of his most constant lay students. From this connection, he developed good relations with representatives of the Manchu Emperor, who were keen to have him occupy a position of importance within the Buddhist hierarchy. In addition to his involvement with Jakrong, he became the abbot of thirteen monasteries.

One of the most famous verses attributed to the Sixth Dalai Lama is taken to refer to the place of his coming rebirth:

White crane, lend me your wings. I’ll not fly far away. Once round Litang, and I’ll be back.

Kelsang Gyatso, who was recognized as the Seventh Dalai Lama  was born in Litang in 1708. Tsangyang Gyatso’s principal students were Gelek Gyatso later the abbot of Sera Ngawang Jampa and Ngawang Lhundrub Dargye, the Mongolian monk who wrote the secret biography. 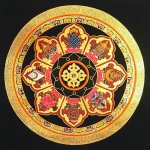