All about Wisdom Protector – Mahakala 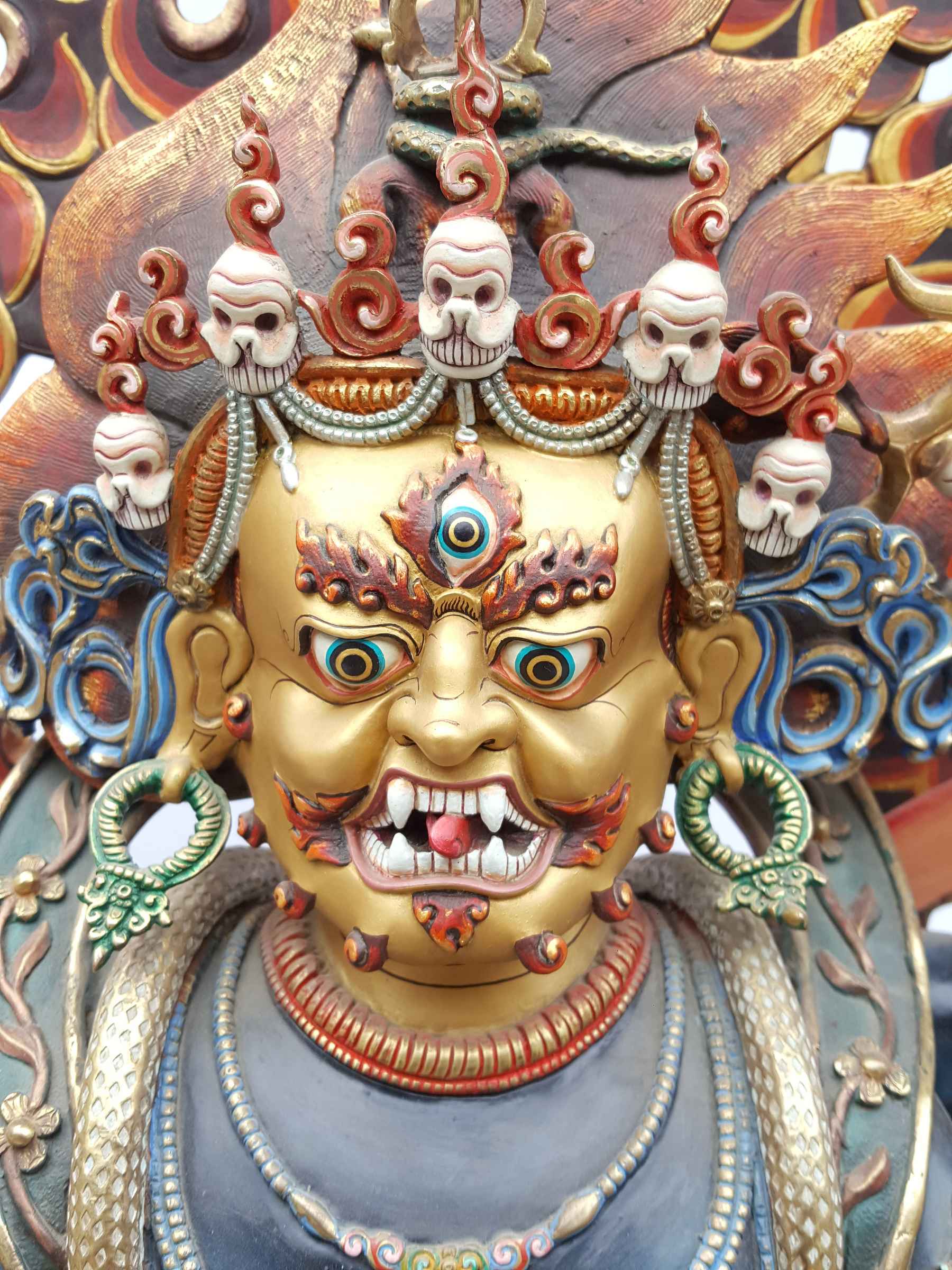 All about Wisdom Protector – Mahakala

Mahakala is a male Buddhist tantric deity. He is the protector deity known as a Dharmapala in Vajrayana Buddhism, especially most Tibetan traditions, in Tangmi and in Japanese Esoteric Buddhism.

Maha literally translates as great and Kala signifies time or death, hence Mahakala means “beyond the time” or “Great Black One“.

Mahakala is a protector deity and specifically the primary Wisdom Protector of Himalayan and Tibetan Buddhism. In some cases, Mahakala can also be a meditational deity in the highest Anuttarayoga Tantras.

Mahakala is usually black in color and appears in 75 different forms, each an emanation of a different Buddha. Black can represent the total absence of color and signifies the true nature of Mahakala as ultimate or absolute reality and transcendence of all forms.

Despite a wrathful demeanor, the essential quality of Mahakala has awakened compassion. His blessings are said to quell difficulties and hindrances arising from depression and anger. He is also in charge of all dharma protectors.

“Mahakala has never been known to harm one being, even in the slightest manner, because he is constantly benefiting beings through the continuous play of the enlightened mind.” – Khenpo Karthar

Mahakala is very popular in Nepal and found typically at entrances to Buddhist monasteries, paired with Ganesh. Figures of Mahakala are objects of lay devotion, thus the Mahakala is often smeared by devotees with food and powder. The iconography of Mahakala here is analyzed by the number of arms.

Mahakala is typically black in color. Just as all colors are absorbed and dissolved into black, all names and forms are said to melt into those of Mahakala, symbolizing his all-embracing, comprehensive nature. Black can also represent the total absence of color and signifies the nature of Mahakala as ultimate or absolute reality and transcendence of all forms.

“There is an emanation of Avalokiteshvara which arose in the form of Mahakala and this is the Shangpa Kagyu Mahakala with one face and six arms, in a standing posture. This form was later adopted by Tsongkhapa and followers as the main protector of the Gelugpa School.” – Jeff Watt

The two-armed Mahakala is most popular in the Newari Buddhism of Nepal. In the Mahakala Tantra, he is described as the form by which the sufferings of sentient beings are removed. Such images are placed in the entrances to many bahals (monasteries) with Mahakala on the left as one enters and Ganesha on the right. 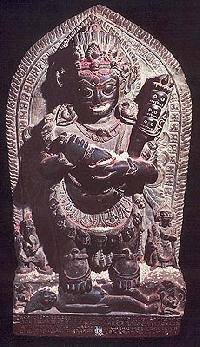 2 armed Mahakala is one-faced and two-armed Mahakala stands on a corpse, with his right hand holding a chopper which symbolizes the cutting through of negative patterns such as aggression, hatred, and ignorance.

In his left hand, he holds a skull cup, a ritual element typically filled with blood or human brain matter.

He is seen standing on the corpse of two human bodies, thus symbolizing the death of negativities and the complete uprooting of negative patterns to such a point that, like a dead body, they will not come to life.

His ornament, a snake sacred thread, and anklet, garland made of skull cups, earrings, necklaces, and bracelets. 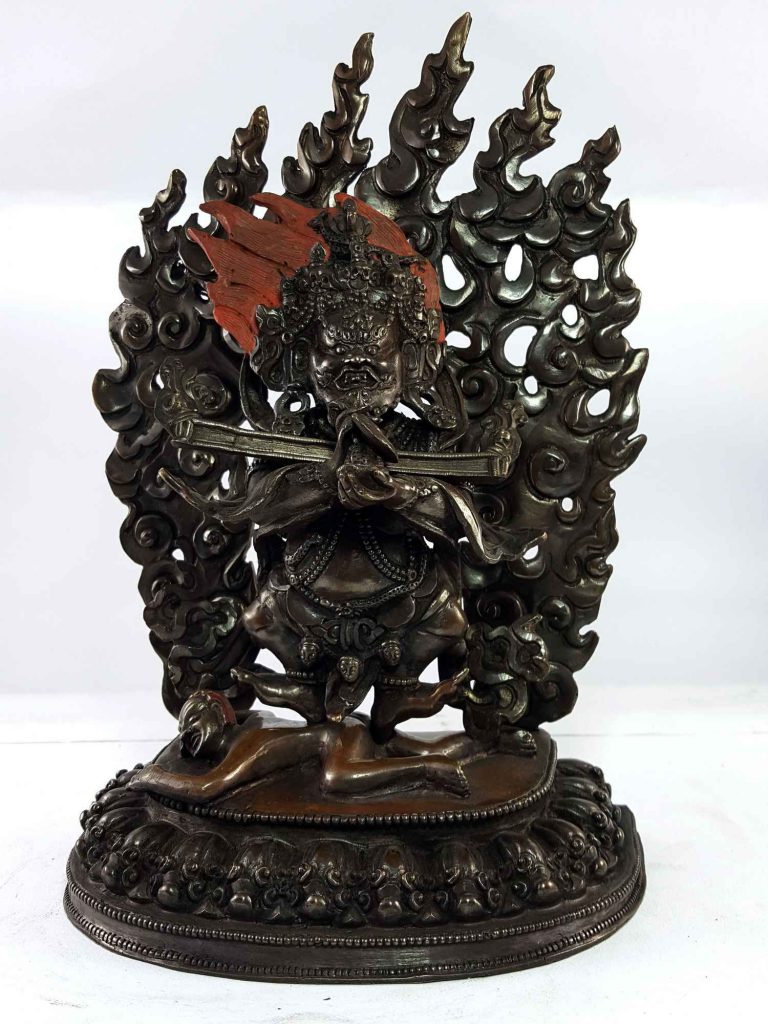 He has a dwarfish figure with bulging eyes and flaming hair.

Kartaridhara, Tibetan: dri gug gon po nag po chen po, English: the Black Lord with a Curved Knife). Mahakala is Glorious Lord, blue-black in color, with one face and two hands, three round red eyes, bared fangs, orange hair flowing upward, a crown of five dry skulls, a necklace of human heads, and nagas of the five races adorning the head. The right hand holds aloft a curved knife, the left holds to the heart a blood-filled skullcup. The right leg is bent and the left extended, standing above a lotus, sun, and upturned human corpse. Wearing a lower garment of tiger skin dwells in the middle of a blazing mass of red-black fire. 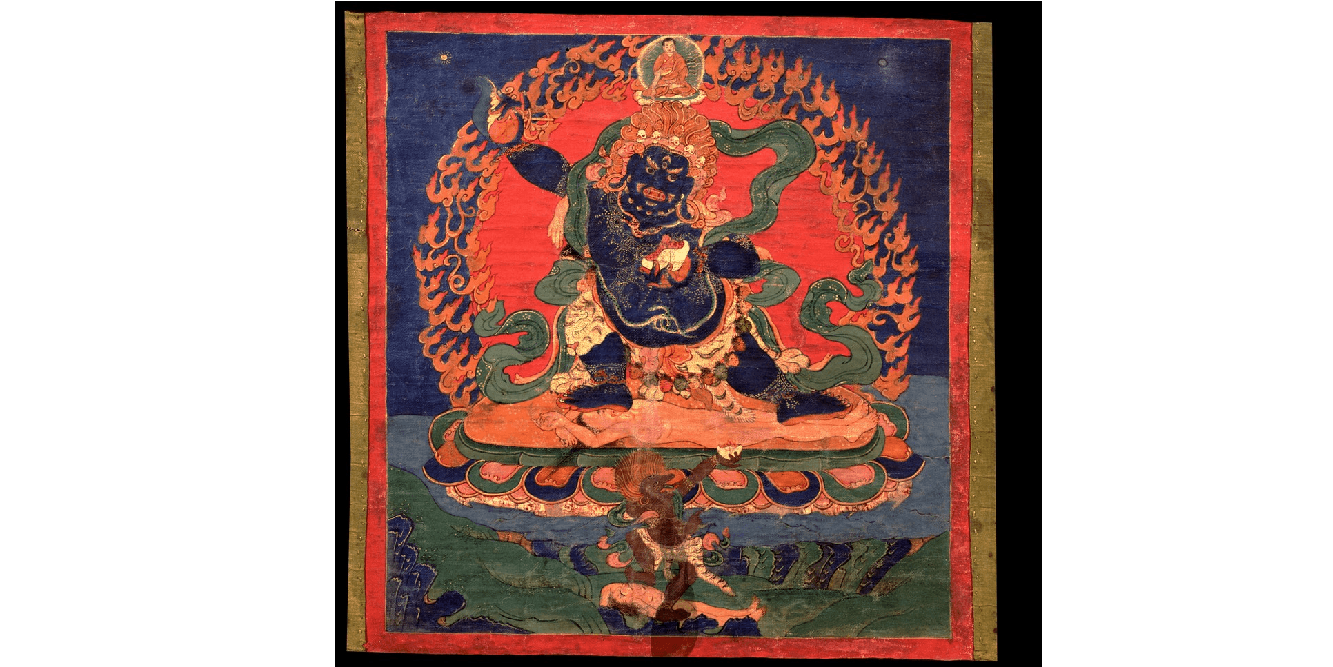 Also adorned with a large green flowing scarf and two necklaces of writhing snakes Mahakala is portrayed against a bright red nimbus completely surrounded with licks of flame contrasted against a dark blue background above a multi-colored lotus in the middle of a blue lake.

Panjarnata Mahakala (Tibetan: gur gyi gon po nag po chen po, English: the Great Black One, Lord of the Pavilion). Mahakala with one face and two hands holds a curved knife and skullcup to the heart. Resting across the forearms is a ‘Gandhi stick. On the crown of the head is the Buddha Vairochana. 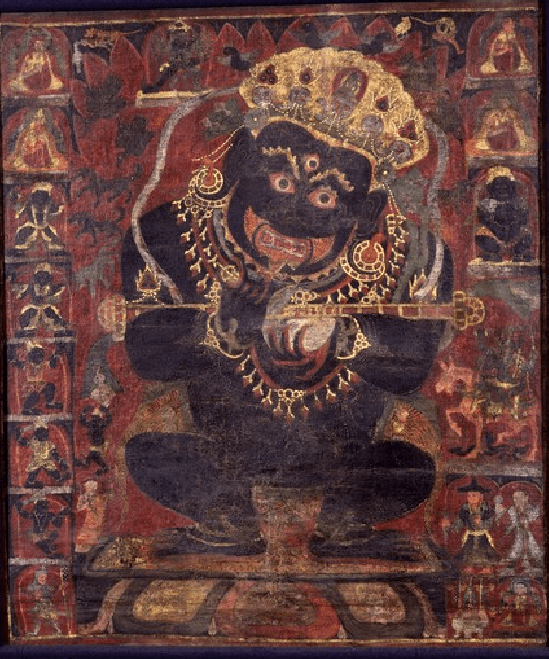 Very fierce with all the usual wrathful ornaments and attire, he wears a necklace of fifty severed heads and tiger skin lower garment. Standing in a squat posture on a corpse above a sun disc, he stands within a mass of flaming fire of pristine awareness. Emanating from the circle of flames along the top and left side is a wolf, black dogs, black crows, and garudas directly above. These animals are the messengers of Mahakala. 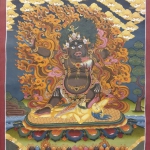 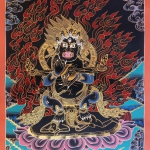 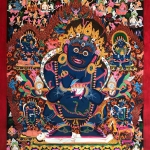 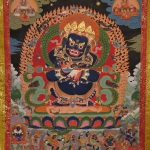 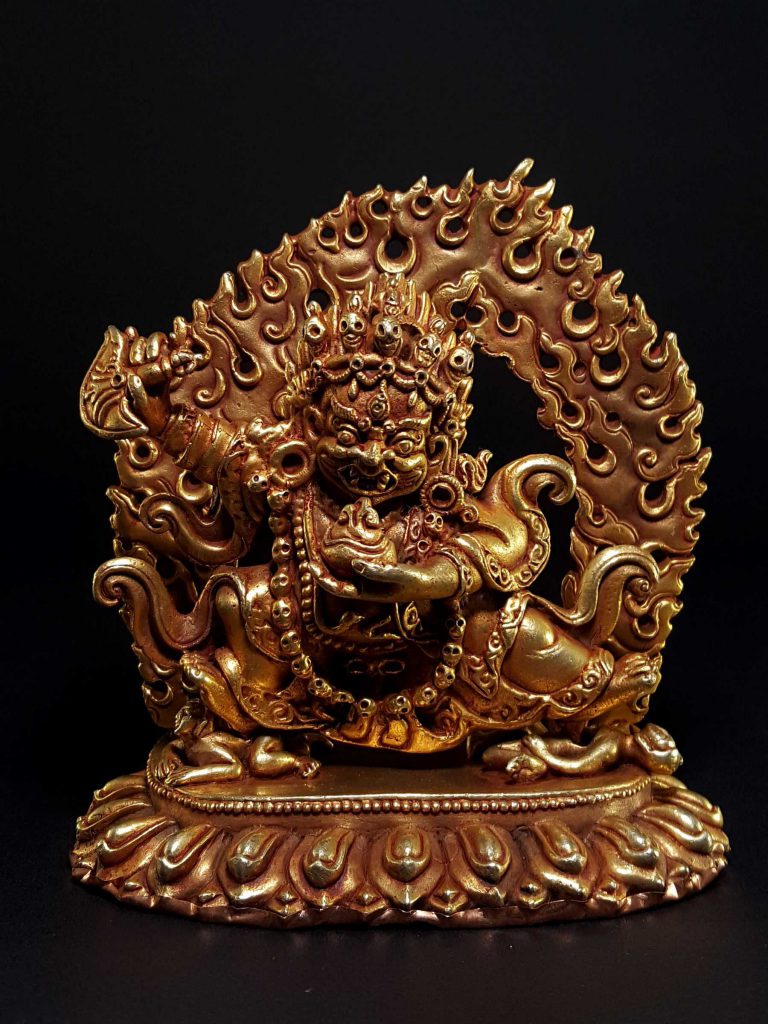 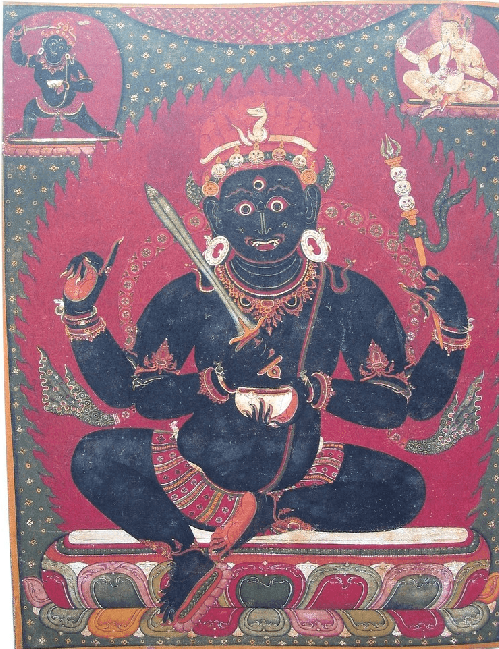 From a general perspective, there are many lineages of Chaturbhuja Mahakala within the Nyingma (old) and Sarma (new) traditions of Tibetan Buddhism. In the Sarma tradition, most lineages of Chaturbhuja derive from the great Pandita Abhayakaragupta to Tsami Lotsawa and GVA Lotsawa. As the special protector for the Chakrasamvara cycle of Tantras, this form of Mahakala is very important to all Tibetan Buddhist Traditions. Some traditions have the form of Chaturbhuja in singular aspect or embracing the consort Chandika. Some traditions and lineages have a full entourage of secondary figures or a mandala configuration.

The short mantra of Mahakala

The long mantra of Mahakala

Mahakala is the most important wisdom dharma protector in Tibet. Mahakala’s blessings are particularly well-known for quelling obstacles and difficulties arising from depression and anger.

In addition, chanting this mantra removes all obstacles in wealth flows, destroys confusion, doubts, and ignorance. He can exterminate all black magic, demon, evil, and enemy encroachments. As a result, many people cultivate his practice in Tibet. 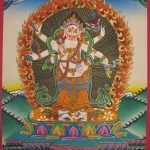