Tibetan and Nepalese Masks from Himalayas

Ganesh, the elephant-headed god of wisdom and success is the defender and remover of obstacles and has to be propitiated first before worship to any other gods.

Ganesh, the elephant-headed god of wisdom and success is the defender and remover of obstacles and has to be propitiated first before worship to any other gods. He is one of the sons of Shiva/Parvati. Also known as Ganesha, Siddhi Datta or bestow-er of success in the work.

His elephant head is believed to be an emblem of wisdom and his mount an emblem of sagacity. His mount is the ” Mooshika” called shrew. He is also known as Vinayaka and can be found in most of the Hindu’s home, temples.

Masks are used in Hinduism, Buddhism, and by the tribal groups of the Himalayas. Their primary function is for use in religious and theatrical dance. Tribal groups use masks in shamanistic healing and exorcism rituals.

4
Oct
2020
Art, Design Pratima
Tibet has the largest tradition of Dragon which dates back more than 7000 years. Dragons are not just mythical stories or just some curiosities. They are part of Tibetan life and culture. The symbols of dragons are everywhere from the beginning of Tibetan history and the importance is still up until today. In Tibet, Dragon is considered as one of the dignities. There is a total of four dignities. Tiger, snow lion, and the .
Read More 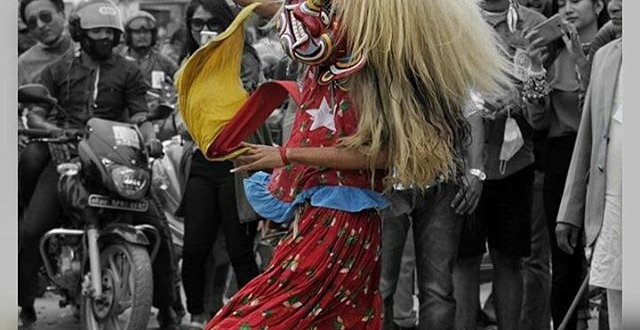 10
Apr
2018
Culture, Gods, Hinduism Himalayas Life
Nepal is a land of real divinity. Nepal is the land of living goddesses known as Kumari. The practice Kumari dates back to centuries, probably from the Malla Kingdom. The spirit of goddesses Taleju Vawani has been residing in form of pre-pubescent virgin girls. Kumari – A brief introduction Kumari is derived from the Sanskrit word Kaumarya which means princess. Kumari is worshipped both by Buddhism and Hinduism in Nepal. Most of the traditional kumari .
Read More

27
Mar
2018
Culture, Mask, Weaving Himalayas Life
There has been an expansion of micro-sized industries in past decade and they have played the vital role in Nepal’s economy.  One of the prevalent and famous micro-business in Nepal is the cottage industry. It is easy to set up these as people with limited skills can easily start a micro business from their own home. Cottage industry normally produces handmade products which can attract a lot of tourists. Although the history of handicrafts goes back .
Read More

1
Mar
2018
Culture, Mask Himalayas Life
Himalayan masks are used in Hinduism, Buddhism, by the tribal group of Mountain and Himalayan Region of Nepal. Masks are generally used for reaching the altered state of the consciousness called Shamanism and for exorcism practice. These handcrafted masks represent the unique culture and traditions of the people residing in the Himalayan people. Walking along the Art Galleries around Thamel, Kathmandu, one can find the wide variety of the Himalayan masks. These masks are originally made .
Read More

14
Jan
2018
Art, Himalayas, Mask, Weaving Himalayas Life
Handcrafts are the specialty of the Himalayan people. They spend most time of their day making different types of handcrafted products out of stone, wood, wools, paintings and many more. Stone Crafts Stone Crafts in Nepal dates back to at least two thousand years. Different earpieces, armlets, bracelets, anklets, styles of halos, folds of garments, manners of the sash, and many others are the distinguishing features that classify the variety of art forms found in .
Read More