Mandalas Life is pleased to introduce the Largest Tibetan Tiger Carpet to all Tibetan Tiger lovers. The size of the carpet is 335 cm wide and 457 cm long (11*15)ft.

Mandalas Life is pleased to introduce the Largest Tibetan Tiger Carpet to all Tibetan Tiger lovers. The size of the carpet is 335 cm wide and 457 cm long (11*15)ft.

Tibetan Tiger Carpets are made in the traditional manner, each design is cut by hand to create a 3-dimensional look that emulates a real tiger skin.

This Tibetan Tiger Carpet is a rare and top-quality rug that conveys the warmth of handmade products.

Origin and Values of the Tibetan Tiger Rug

Mimi Lipton, the editor of the book “The Tiger Rugs of Tibet” says that they were not to be seen outside Tibet until 1979 when the first one was brought to the U.S.A. and bought by the Newark Museum.

In Hinduism,  Lord Shiva is depicted sitting on a tiger skin, it could be a skin of a dead tiger. Tiger represents lust. He’s sitting on the tiger’s skin indicates that He has conquered lust. Yogis particularly like the tiger rugs for their practice.

All the traditional texts that list the chopas tools of the trade mention the damaru, bell, angling, and tent, followed closely by the tiger seat, with its claws intact. Tiger pelts would have been fairly plentiful and available, their natural range spreading from India and Nepal to China.

Hunters or villagers eliminated animals that encroached on their territory, while the large cats still had vast uninhabited regions in which to roam free. Then, as now, in spite of the Buddhist respect for all life, hunting and meat-eating was an intrinsic part of Tibetan culture.

The dwindling tiger population worldwide, and a very favorable change in human consciousness, has made the killing of these magnificent animals abhorrent to the modern mind. It is not clear when the transition to the woven wool tiger took place, but certainly, the two traditions existed simultaneously, and today the tiger carpet has happily taken the place of an actual tiger pelt.

The process of making the Largest Tibetan Tiger Carpet includes several stages. It took 3 months for 4 weavers to complete the rug.

Wool Shorting is the first step of carpet making process. The raw wool is collected from the Himalayan Breed sheep. The shorting process is done according to its sets dark and light by removing other impurities. 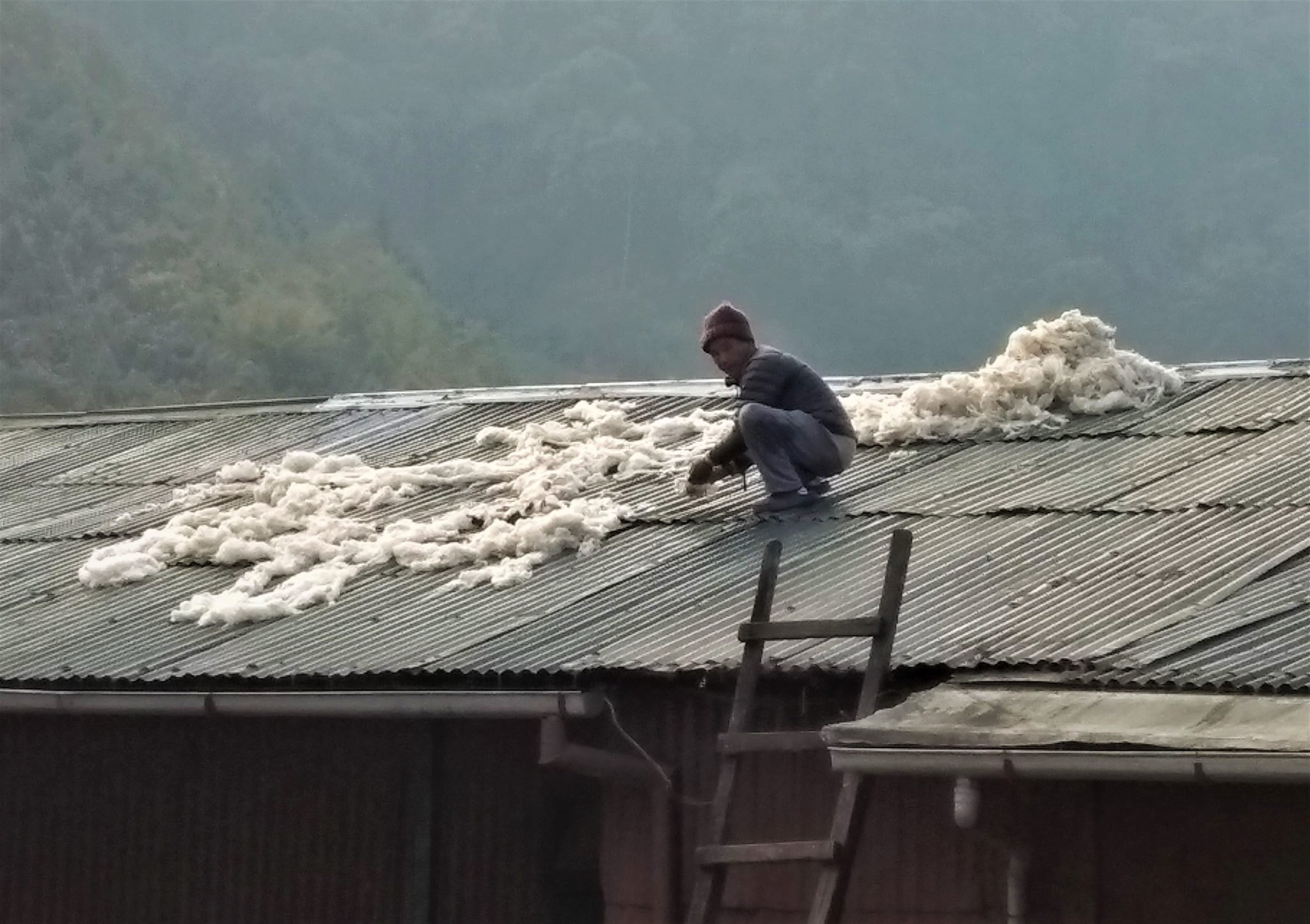 After shorting the wool, it is washed without using any detergent and chemicals to remove impurities such as grease, dirt, and straw.

Once the wool is washed, it is sun-dried.

The wool fibers are separated disentangled and aired to give carding strands. It is at the carding states that blends of fibers can be made.

After carding the wool, spinning is done. The wool is spun on spinning wheels by hand into yam.

dyeing and coloring the wools

The wool is dyed by using hands with the swiss pot dying process. And the wool is dried in the sun.

Once the dyed yarn is properly dried, it is rolled into balls of three-ply yarn manually, in order to ease the actual weaving and knotting.

Making the Graph for The Tibetan Tiger Rug

After the wools are ready in the desired color the graph of the Tibetan Tiger Rug is made by using the Carpet Making Software.

Setting up the Loom for the Tibetan Tiger Rug

The loom is set up to weave the Tibetan Tiger Rug is made by using Tibetan Knotting System. It is woven on a vertical loom, which consists of two vertical poles that are fixed by a horizontal base for loom rigidity.

As the weaving process is completed the Tibetan Tiger rug is taken off the loom for the trimming process. During trimming the unnecessary fibers are removed and knots that appear at the back of the carpet are maintained for smoothing. After this, the carpet is brought to a well-leveled surface, and specially designed long pointed Tibetan scissors are used to start the trimming process.

After trimming the tiger rug undergoes a strenuous washing procedure with fresh water and eco-friendly washing materials until the tiger rugs are clean and take on a soft enhancing texture and look. The properly washed carpet is dried in the sunlight for up to five days.

The Tibetan tiger carpet is stretched on all sides by vice-like equipment and ties over a metal frame for about a day to ensure its proper shape and size.

When completely dry, the tiger rug is thoroughly checked against the precise measurement and given a finishing touch by a fine, re-trimming making it an elegant, and a fine example of craftsmanship.

The materials used to make this carpet are dyed Tibetan wool, the cotton warp for the vertical thread.

The body of the tiger is in light orange color with 2 shades of beige and light yellow in the outer body of the Tiger.

The black stripes in the light orange body of the Tiger make the carpet look like real tiger skin with beautiful details.

The Tiger has Blue eyes and a pink face beige nose.

This large Tibetan Tiger Rug is perfect for your luxurious living room which will add Classical architecture to the feel of a room, making a home seem historic.

The Tiger Rug is a must-have for your meditation room. Tiger is a symbol of confidence, disciplined awareness, modesty, and kindness. It is relaxed but is full of energy. Its resting state is a symbol of satisfaction, fulfillment, and enlightenment. The Tiger stands for dominance over the forest and the air element.

The Tiger Rug is 100% handmade by a Nepali artisan with Tibetan wool in the vertical loom. It took 3 months to weave this carpet for 4 weavers.

Be the first to review “Tibetan Tiger Carpet” Cancel reply