Tibetan painting of Mahakala art is handpainted on cotton canvas by Thangka artist from Nepal. Mahakala is comprehensive in nature.

Tibetan painting of Mahakala art is handpainted on cotton canvas by Thangka artist from Nepal. Mahakala is comprehensive in nature. The two-armed Mahakala called Bernakchen is a protector of the Karma Kagyu school.

Mahakala is presented at the center of the painting. It is often thought to be the primary protector, but it is actually the main protector of the Karmapas. 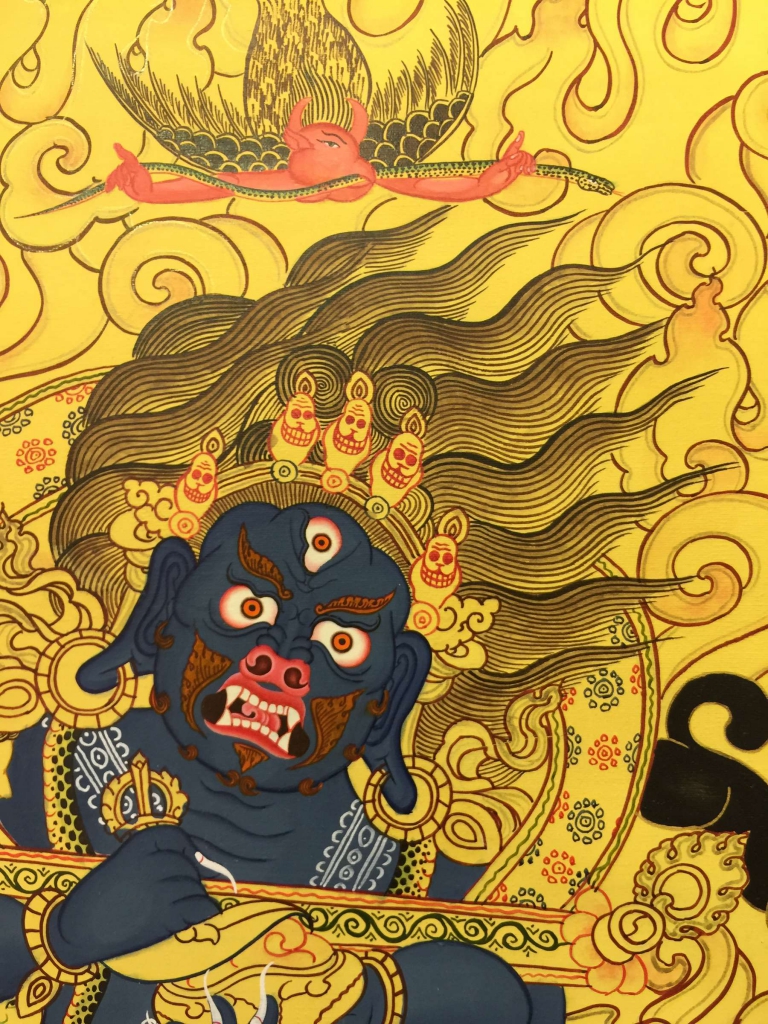 Mahakala is typically black in color. Just as all colors are absorbed and dissolved into black, all names and forms are said to melt into those of Mahakala. Mahakala is symbolizing his all-embracing. Black can also represent the total absence of color and signifies the nature of Mahakala as ultimate or absolute reality and transcendence of all forms.

His black form was transformed from Avalokitesvara and helps people conquer any obstacles on their path to enlightenment. This protective deity is described as figures possessing stout bodies, short but thick and strong limbs. His flaming hair, decorated with a crown of skulls, rises from his forehead, while a circle of flames dances around him.

His face possesses a typical wrathful expression. The mouth is contorted to an angry smile from its corners protrude long fangs. The protruding, bloodshot eyes have an angry and staring expression and usually, a third eye is visible in the middle of the forehead.

He holds a chopper in his right hand that symbolizes the cutting through of negative patterns such as aggression, hatred, and ignorance. He holds a skull cup a ritual element typically filled with blood or human brain matter in the left hand. He is seen standing on the corpse of two human bodies which symbolizing the death of negativities and the complete uprooting of negative patterns to such a point that like a dead body, and they will not come to life.

The mantra of Mahakala is Om Mahakalaye Soha.

Mahakala is a deity common to Hinduism, Buddhism and Sikhism. According to Hinduism, Mahakala is a manifestation of Shiva and is the consort of Hindu Goddess Kali and most prominently appears in Kalikula sect of Shaktism. Mahākāla also appears as a protector deity known as a dharmapala in Vajrayana Buddhism, particularly most Tibetan traditions (Citipati), in Tangmi and in Shingon. He is known as Dàhēitiān and Daaih'hāktīn (大黑天) in Mandarin and Cantonese, Daeheukcheon (대흑천) in Korean and Daikokuten (大黒天) in Japanese. In Sikhism, Mahākāla is referred to as Kal, who is the governor of Maya.

9
Apr
2021
Deities, Mantra sadiksha
Mahakala is a male Buddhist tantric deity. He is the protector deity known as a Dharmapala in Vajrayana Buddhism, especially most Tibetan traditions, in Tangmi and in Japanese Esoteric Buddhism. Maha literally translates as great and Kala signifies time or death, hence Mahakala means “beyond the time” or “Great Black One“. Mahakala is a protector deity and specifically the primary Wisdom Protector of Himalayan and Tibetan Buddhism. In some cases, Mahakala can also be .
Read More

7
Dec
2020
Art, Himalayan Art, Thangka Samiksha
Brahmarupa Mahakala is the outer form of Chaturmukha Mahakala.  He is the special protector of the Guhyasamaja Tantra and the 2nd main protector of the Sakya School. Brahmarupa, a benign form of the wrathful deity Mahakala, is shown as a bearded nomadic ascetic, sitting on a corpse, wearing a bone apron, and holding a thighbone trumpet and a skull cup. A protector of the Sakya school of Tibetan Buddhism, he is credited with introducing .
Read More

14
Sep
2020
Statues, Statues Finishing sadiksha
Mandala life is pleased to provide the service of altering the finishing of the statue, from various colors of oxidation to silver and gold plating services. Chocolate color oxidation finishing This oxidation is an emulation of copper statues aged more than 100 years. It is the process in which the statue is given artificial oxidation using chemicals. As the color has not been painted in the statue it does not wear off easily. This .
Read More

21
Jun
2020
Art, Himalayan Art, Thangka Samiksha
Ekajati is  Mahacinatara also known as one of the 21 Taras. Ekajati is along with Palden Lhamo deity is one of the most powerful and fierce goddesses of Vajrayana Buddhist mythology. Ekajati is the protector of secret mantras and “as the mother of the mothers of all the Buddhas” represents the ultimate unity.  She is the most important protector of the Vajrayana teachings, especially the Inner Tantras and terms. The History of the Deity .
Read More