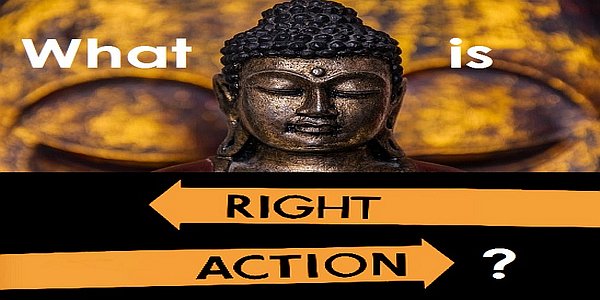 What is called Right Action?

He avoids stealing, and abstains from it; what another person possesses of goods and chattels in the village or in the wood, that he does not take away with thievish intent.

He avoids unlawful sexual intercourse and abstains from it. He has no intercourse with such persons as are still under the protection of father, mother, brother, sister or relatives, nor with married women, nor female convicts, nor, lastly, with betrothed girls. This is called Right Action.

Now, Right Action, let me tell you, is of two kinds:

Abstaining from killing, from stealing, and from unlawful sexual intercourse-this is called the “Mundane Right Action, which yields worldly fruits and brings good results. But the abhorrence of the practice of this three-fold wrong action, the abstaining, withholding, refraining therefrom-the mind being holy, being turned away from the world, and conjoined with the path, the holy path being pursued-: this is called the “Ultramundane Right Action,” which is not of the world, but is ultramundane, and conjoined with the paths.

Hence, there are three things that accompany and follow upon right action, namely: right understanding, right effort, and right attentiveness.