Tibetan Dzambala  Thangka is hand-painted on Cotton Canvas in Kathmandu, Nepal. In Hindushim, he is called Kubera. Jambhala Thangka is the god of prosperity in Buddhism and helps to eradicate poverty.

Dzambala is depicted in the center of the thangka.

Tibetan Dzambala  Thangka is hand-painted on Cotton Canvas in Kathmandu, Nepal. In Hindushim, he is called Kubera. Jambhala Thangka is the god of prosperity in Buddhism and helps to eradicate poverty.

Dzambala is depicted in the center of the thangka. It is pronounced like Yellow Jambhala. 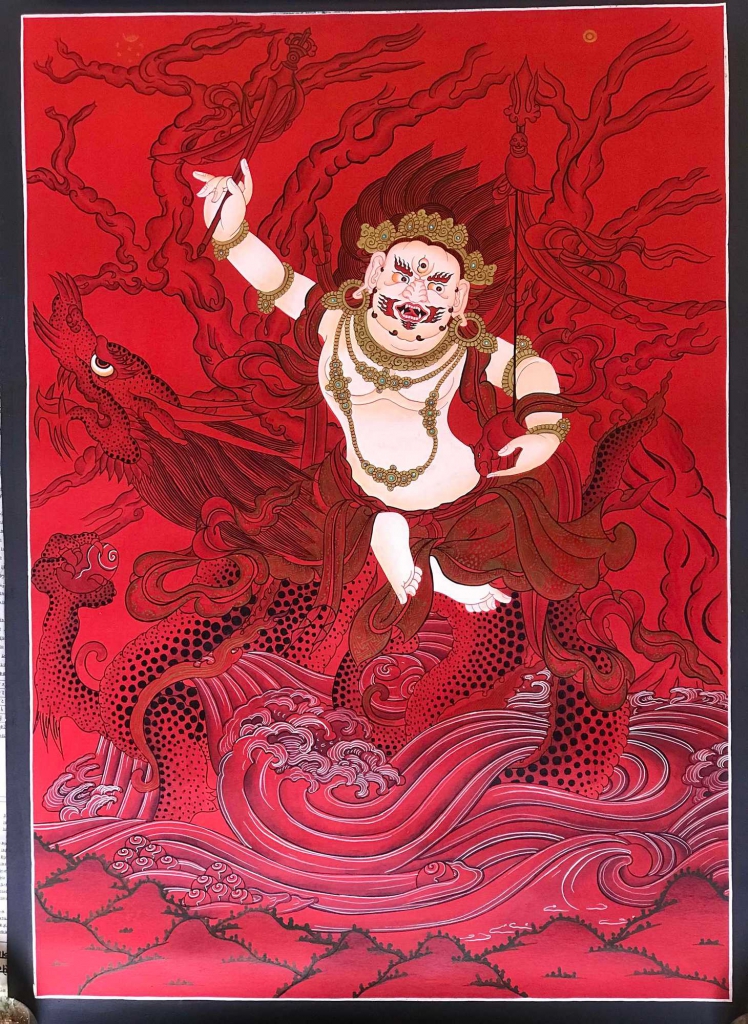 Dzambala is considered the most popular and powerful Wealth of God. He is the emanation of Buddha Ratnasambhava. He can remove poverty within the six realms, increasing virtues, life span, and wisdom.

He is also said to be an emanation of Vaisravana, one of the “Four Great World-protecting Heavenly Kings”. He is the guardian of light in Buddhism, a great charitable deity who grants fortune and protection. Lord Vaisravana lives in the northern region under the Four Heavens, at the northern crystal palace on the fourth level of Mount Sumeru.

According to the commentary on Lotus Sutra, this heavenly king is extremely knowledgeable as his perpetual protection of the Buddhas has enabled him to receive many teachings. Yellow Jambhala has a yellow-colored body, he sits in the vajra position with his right leg is panhandle, his right foot is above a snail and lotus flower, and his left leg is kinked. He has one face and two arms. His left hand holding a mongoose named Nehulay which spews forth precious jewels from its mouth, while his right hand holding gems-shaped fruit and leaf of a lotus.

An ordinary image of Lord Vaisravana is one that holds a precious pagoda in the left, which pours out various treasures. In Tibetan Tantric images, the precious pagoda is replaced by the treasure-emitting mongoose. Yellow Jambhala sits on a lotus, sun disk, and moon disk.

Be the first to review “Tibetan Dzambala Thangka” Cancel reply

21
Mar
2018
Buddhism sadiksha
Zambala in Tibetan Buddhism is commonly regarded as a God of Wealth. It is believed that the Zambala is the Money Guard. Zambala is the fortune of wealth and prosperity. It is believed that if anyone will keep the painting of zambala in their home they will be blessed with wealth and prosperity. Zambala is serving as God of Wealth. As a celestial being, a king of North, he has followed Buddha and reached .
Read More

1
Jan
2018
Deities, Jambhala Sadiksha
JAMBHALA, the god of wealth is the Buddhist form of the Kubera. As  Yi-dam is called Jambala, probably from the Jambhara (Lemon) which he carries in the right hand. He is little giant and prosperous looking. He holds the bag of money and coins. His crown may contain an image of Ratnasambhava. Like Kubera, he is attended by a mongoose that vomits jewels. There is a white form of Jambhala holding a trident and scepter. .
Read More