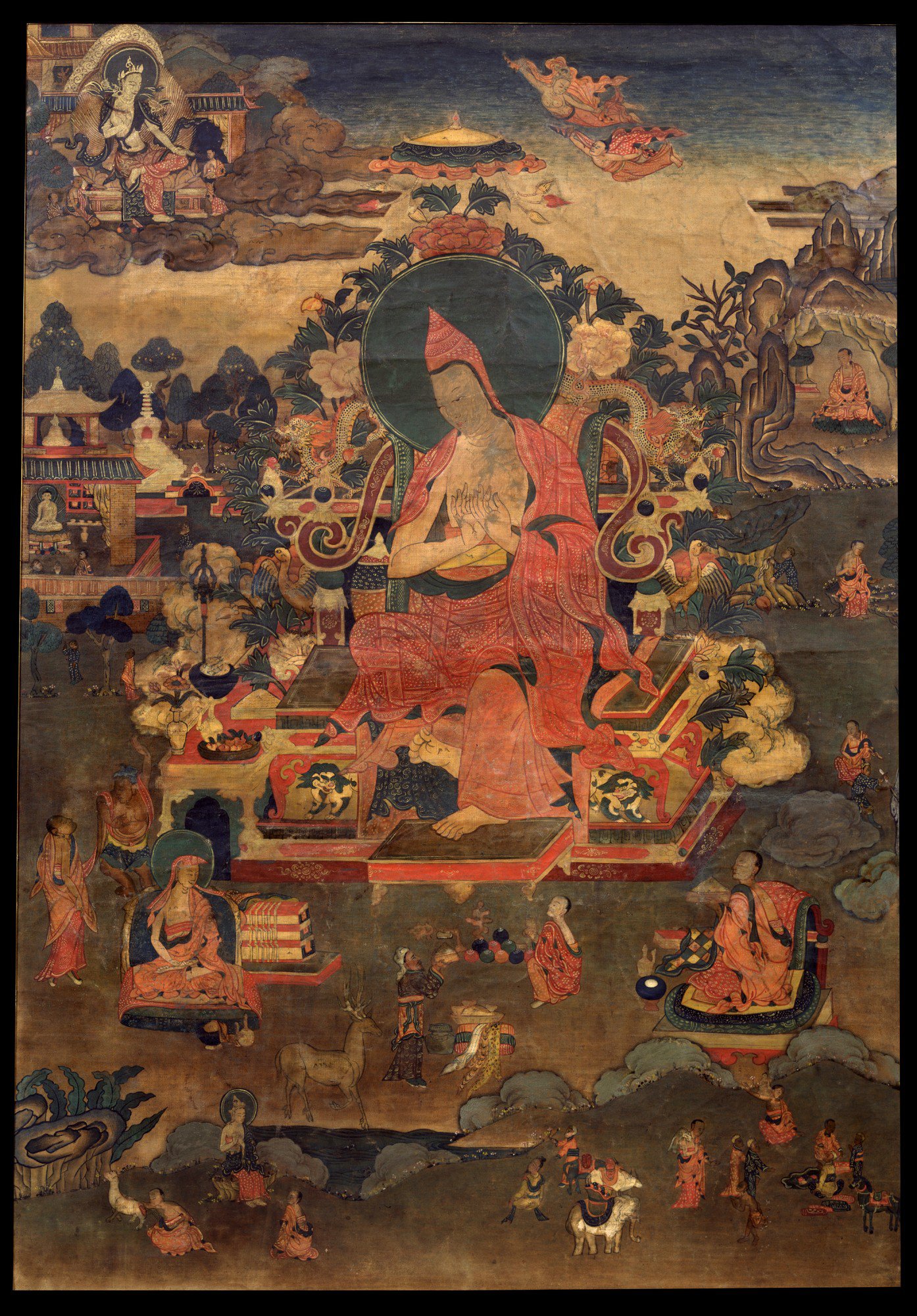 Asaṅga is one of the most important spiritual figures of Mahayana Buddhism and the founder of the Yogacara school. Asanga is known as the 4th-century founder of the Mind-Only School of Buddhist Philosophy.

The Existence of the Asanga

In this section, we are going to talk about the existence of Asanga. After a short etymological description of the word Asanga itself, we will review his frameworks for Abhidharma, and we will learn about Asaṅga’s Disciples finally, we will highlight the Yogacara tradition.

Etymology of the Asanga

Asanga is known as  tog me, pag pa in Tibet.

According to some scholars, Asaṅga’s frameworks for Abhidharma writings retained many underlying Mahisasaka traits, but other scholars argue that there is insufficient data to determine which school he originally belonged to.

In the record of his journeys through the kingdoms of India, Xuanzang wrote that Asaṅga was initially a Mahisasaka monk but soon turned toward the Mahayana teachings.

Asaṅga had a half-brother, Vasubandhu, who was a monk from the Sarvastivada school.

Vasubandhu is said to have taken up Mahayana Buddhism after meeting with Asaṅga and one of Asaṅga’s disciples.

Asaṅga spent many years in serious meditation and study under various teachers but the narrative of the 6th-century monk Paramartha states that he was unsatisfied with his understanding.

Paramartha then recounts how he used his meditative powers siddhis to travel to Tuṣita Heaven to receive teachings from Maitreya Bodhisattva on emptiness.

And how he continued to travel to receive teachings from Maitreya on the Mahayana sutras.

Xuanzang,  a Chinese monk who traveled to India to study in the Yogacara tradition tells a similar account of these events.

In the great mango grove five or six li to the southwest of the city Ayodhya, there is an old monastery where Asaṅga Bodhisattva received instructions and guided the common people.

Earlier, we studied the Existence of the Asanga. Now we are going to learn about the iconography of Asanga.

Iconography of the Asanga

In the iconography of the Asanga, we will learn about his body posture, hand and leg gesture, and different representations of Asanga in thangkas and stupa.

Asanga is gazing downward and to the side, he holds the two hands at the heart in the mudra (gesture) of Dharma teaching.

Asanga is attired in the orange patchwork robes of a monk he also wears a Pandita (scholars) hat. Asanga is with the legs forward.

Earlier, we studied the Existence of the Asanga, and iconography of Asanga. Now we are going to learn about depicting Asanga. 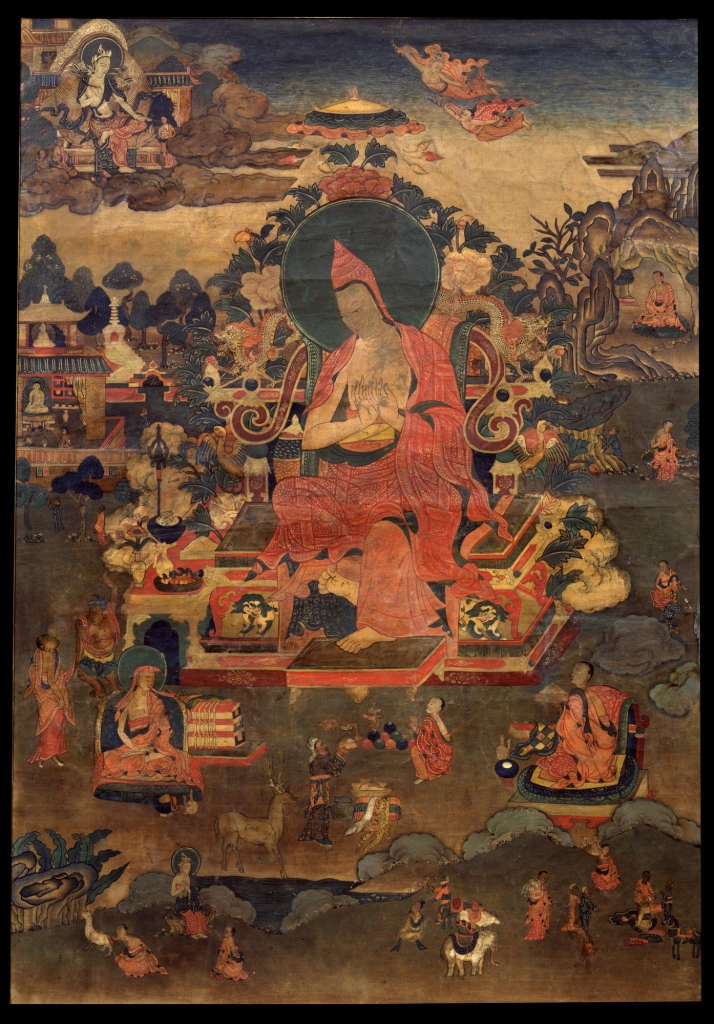 The thangka of Asanga is from Tibet. It is made between 1800 AD to 1899 AD. Asanga is from Buddhist lineage. The base of the painting is ground mineral pigment on cotton. Presently, it is in the Rubin Museum of Art.

By depicting this thangka, we will learn about Boddhisattva Maitreya.

From early youth, until mid-life Asanga lived and studied in a monastery middle left, then Asanga withdrew to a cave retreat upper right with the determination to actually see the bodhisattva Maitreya. After three years without results discouraged Asanga left the cave.

Upon meeting with a patient man who was engaged in making a needle by rubbing a large piece of iron with a small piece of cotton cloth middle right, Asanga resolved to go back to the cave and persevere.

After another six years had passed Asanga again became discouraged and left the cave. Again seeing a man with a small spoon slowly digging away at a mountain that was blocking the light from shining on his house lower middle right, Asanga renewed his resolve and returned to the cave.

After another 3 years, thoroughly discouraged, Asanga left the cave to return to the monastery. Along the way near the town of Achinta meeting upon an old mangy dog with a back covered in sores and a host of maggots feeding on the bottom of the wound left.

With thoughts of compassion, Asanga cut a piece of flesh from his own body and began to remove the maggots with his tongue to place on the substitute meat, suddenly the dog vanished and the bodhisattva Maitreya appeared in front.

Asanga immediately asked where he had been all these years and Maitreya responded that he had been by Asanga’s side all this time and if he didn’t believe him.

Then he should hoist the bodhisattva onto his shoulders and carry him through the town. When Asanga did this, amongst all the townspeople, only an old pious beggar woman was able to see a mangy old dog on Asanga’s shoulder bottom right.

No one saw the form of the bodhisattva Maitreya.

After this, Maitreya and Asanga flew into the air and up to the Tushita heaven top right where the bodhisattva taught Buddhist principles to Asanga for 50 years top left. When Asanga finally returned to earth he brought back with him the famous Five Texts of Maitreya.

Earlier, we studied the Existence of Asanga, the iconography of Asanga, and depicting Asanga. Now we are going to learn about the presentation of Asanga with Vasubandhu.

Asanga with Vasubandhu was painted around 1400-1499 AD. The size of this painting is 45.72×38.10cm. The base of the painting is cotton and the ground mineral pigment is used to color it. Asanga belongs to Shakya and Buddhist Lineage. This Masterpiece Thangka Art is still preserved and kept in the Rubin Museum of Art.

By depicting this thangka we will learn the presentation of Asanga. 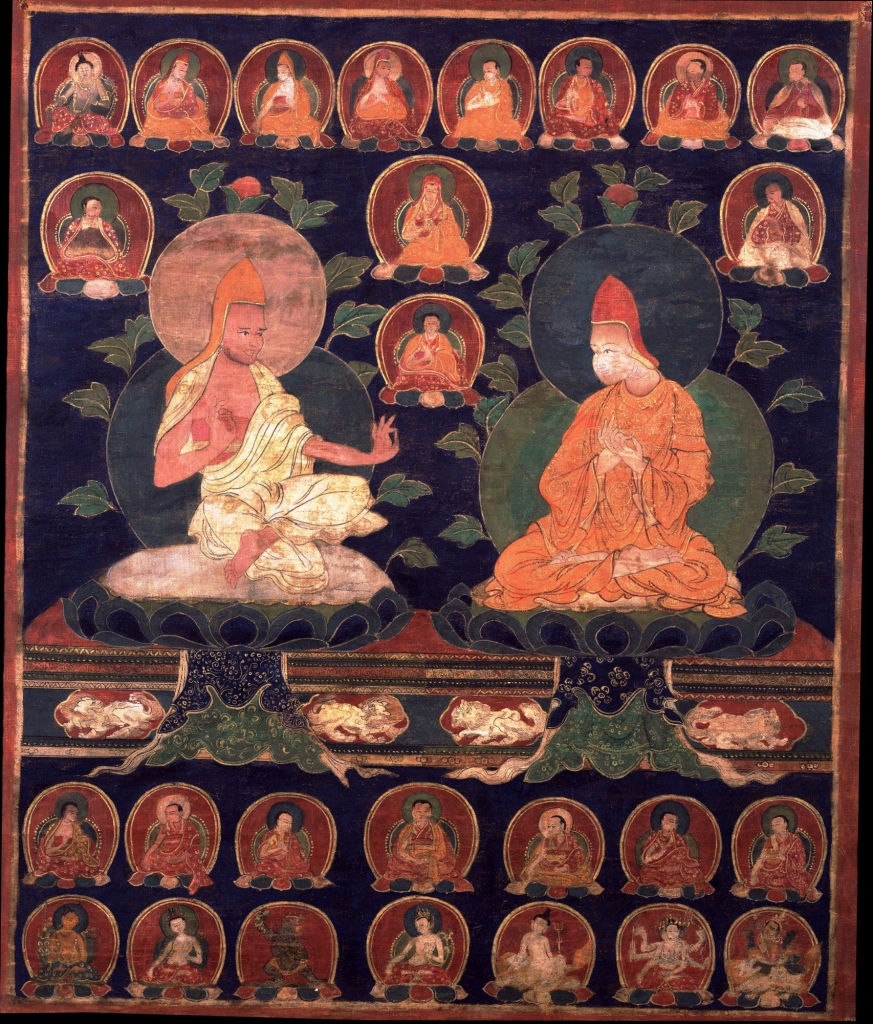 Asanga and Vasubandhu accompanied by the early Yogachara lineage teachers descending through the Sakya Tradition of Tibetan Buddhism.

The identification of the two central figures is not confirmed and this is just the best guess at this time and from comparing the other figures in the composition. Based on the length of lineage teachers this thangka can be dated to the late 15th early.

Earlier, we studied the Existence of Asanga, the iconography of Asanga, depicting Asanga, a representation of Asanga with Vasubandhu. Now we are going to learn about Asanga with Maitreya Buddha.

Asanga with Maitreya Buddha is from Tibet.  The base of the painting is cotton and the ground mineral pigment is used to color it. Asanga belongs to Karma and Buddhist Lineage. This thangka is from a private collection.

By depicting this thangka, we will learn about the  Asanga. 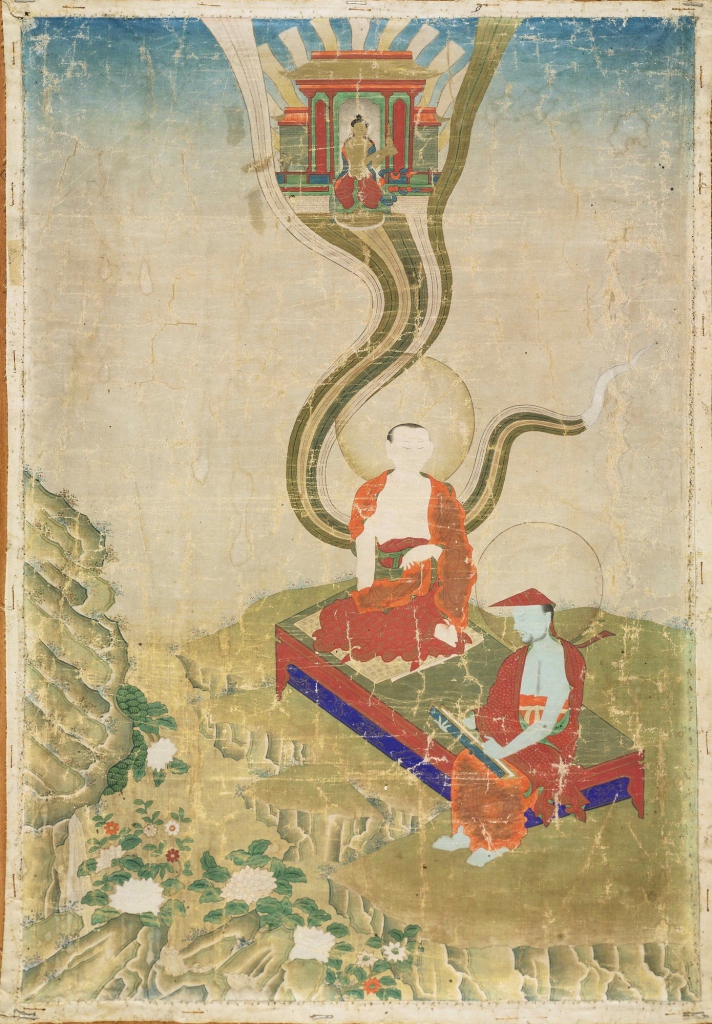 Asanga and Vasubandhu composition belonging to five thangkas set depicting the Six Ornaments and Two Excellent Ones of the Southern Continent.

The bodhisattva and future Buddha Maitreya sits at the front of a temple in the Tushita heaven.

Asanga with Amitayus Buddha was painted around 1600-1699 AD. The size of this painting is 57.15×37.47cm. The base of the painting is cotton and the ground mineral pigment is used to color it. Asanga belongs to Gelug Lineage. This thangka is from a private collection.

By depicting this thangka, we will learn about the presentation of Asanga with different deities such as Amitayus Buddha, White Manjushri, White Tara, Pandita scholar Shakyaprabha, and Gunaprabha and Vasubandhu, etc. 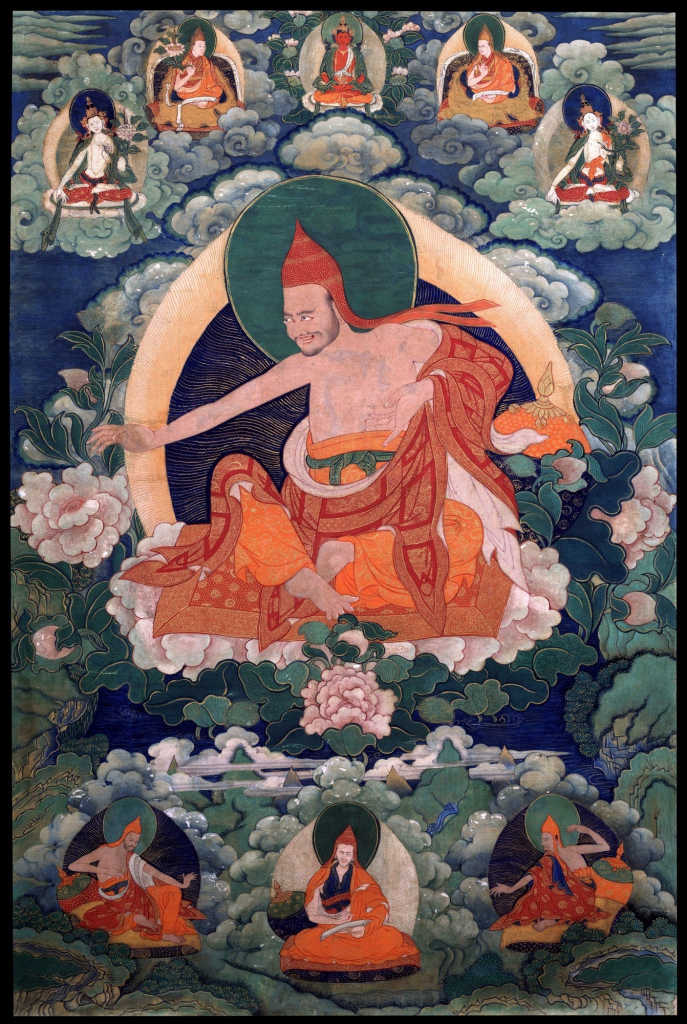 Arya Asanga is the founder of the Mind-Only Cittamatra School of Mahayana Buddhism. \

Buddha of the long-life Amitayus Buddha is at the top center of the thangka.

Amitayus Buddha is with the Gelugpa lama Lobzang Gyatso sitting at the left.

And another lama sitting to the right.

Bodhisattva of wisdom who is also known as White Manjushri is on the left of the thangka.

Goddess of a long-life who is called White Tara is on the right side of the thangka.

Pandita scholar Shakyaprabha is at the bottom center of the thangka. 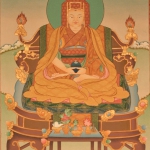