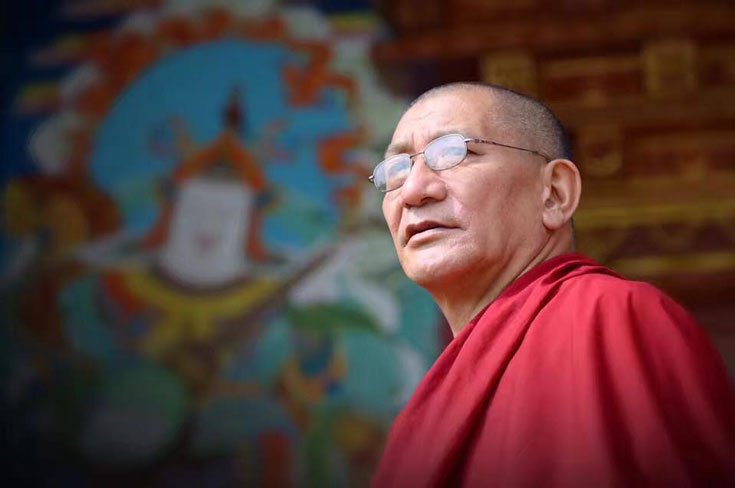 Gyurme Tenpa Gyaltsen aka the Fourth Katok Getse Rinpoche was one of the five ‘’Golden Throne’’ holders of the Katok Monastery lineage, a branch of the Nyingma tradition. At the Nyingma Monlam in Bodhgaya, January 2018, Rinpoche was appointed to be the supreme head of the Nyingma Tradition for three years.

At the same meeting of the representatives of the Nyingma schools, it was decided to appoint Kathok Getse Rinpoche and five other Nyingma lamas as the supreme head of Nyingma tradition in a three-year tenure basis.

He spent most of his time at Namgyal monastery in Dharamshala before the enthronement. The original seat of the Kathok lineage is Kathok Dorje Den in Kham Khatok, Tibet and is over 840 years old.

Kathok Getse Rinpoche was born in Golok, Eastern Tibet, and was recognized by the 16th Karmapa, Jamyang Khyentse Chokyi Lodro and Adzom Gyalse Gyurme Dorje as the reincarnation of the Third Katok Getse, Gyurme Tenpa Namgyal.

Teachers of the Kathok Getse Rinpoche

From a very early age, he received teachings and empowerments from many masters such as:

Katok Getse Rinpoche, like his previous incarnations, illuminates the teachings of Nyingma, the first Buddhist doctrine of Tibet, and embodies a great living legacy of the Buddhist teachings. Furthermore, some in his series of incarnations have a connection with the past incarnations of the Dalai Lama. For example, when Katok Tsewang Norbu went to Lhasa, the Seventh Dalai Lama, Kalzang Gyatso, held him in high regard and asked him to reverse, through ritual, the Mongolian army in northern Tibet, which he did. The Seventh Dalai Lama, greatly pleased, offered him a handsome reward. The true reincarnation of Katok Rigdzin Tsewang Norbu was the First Katok Getse, Gyurme Tsewang Chokdrup. When he came to Lhasa on pilgrimage he met the Eighth Dalai Lama, Jampal Gyatso, and the two of them immediately began exchanging teachings. This association became an inexhaustible offering that pleased all the buddhas, and great mutual respect developed between them. Later, the Third Katok Getse, Gyurme Tenpa Namgyal, came to Lhasa to meet the Thirteenth Dalai Lama, Thupten Gyatso. He was received with joy and they developed a good relationship. His direct reincarnation, the Fourth Katok Getse, Gyurme Tenpa Gyaltsen, through the power of his previous excellent aspirations and karma, was able to safely arrive in India as a refugee. He and I have connected as student and teacher.

The relationship between Nepal and Kathok Getse Rinpoche

Since coming into exile in 1997, he spent many years in retreat in Nepal and was the current leader of Katok Ritrod Monastery in Nepal.

He spent many years in Nepal. His monastery is in the hilly area in Nepal. He was recognized by the 16th Karmapa and other lamas as the reincarnation of the third Kathok Getse, Gyurme Tenpa Namgyal.

His Holiness the 14th Dalai Lama wrote of Getse Rinpoche:

Katok Getse Rinpoche, like his previous incarnations, illuminates the teachings of Nyingma, the first Buddhist doctrine of Tibet, and embodies a great living legacy of the Buddhist teachings.

Nyingma head Kathok Getse Rinpoche has passed away at the age of 64 in Nepal following a car accident.

The accident took place outside the Kathmandu valley. He was in retreat and slipped while coming out of the retreat place, causing severe injury. His monastery is in a hilly area three hours drive from Kathmandu. His body was kept in Adzom Kathok Choekhorling to allow the public to pay their respects. 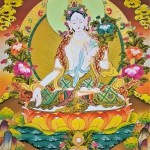 White Tara is known as the Female Buddha associated with Long Life. She is the goddess of compassion. Her love heals at the source of disease, bringing health, strength, longevity, and beauty.
Buy White Tara Thangka Painting Online