Buddhist Medicine Buddha Painting is hand-painted on a handmade cotton canvas. Bhaisajyaguru is known as Medicine Buddha. He is also called the healing Buddha.

In Tibet, he may be represented either as a Buddha or as a Bodhisatwa. As a Buddha, he has the urn (small round bulge or protuberance above the bridge of the nose) the fourth superior mark of a buddha Ushinisha (A Buldge of the protuberance in the skull of the Buddha the first superior marks of a Buddha ) short and curly hair. He wears a monastic robe, is seated with the legs crossed.

His left hand lying in his lap in meditation mudra, usually holds the medicine bowl, while the right hand in charity mudra holds either a branch with fruit or the fruit alone, of the myrobalan, as a medicinal plant found in India and other tropical countries. 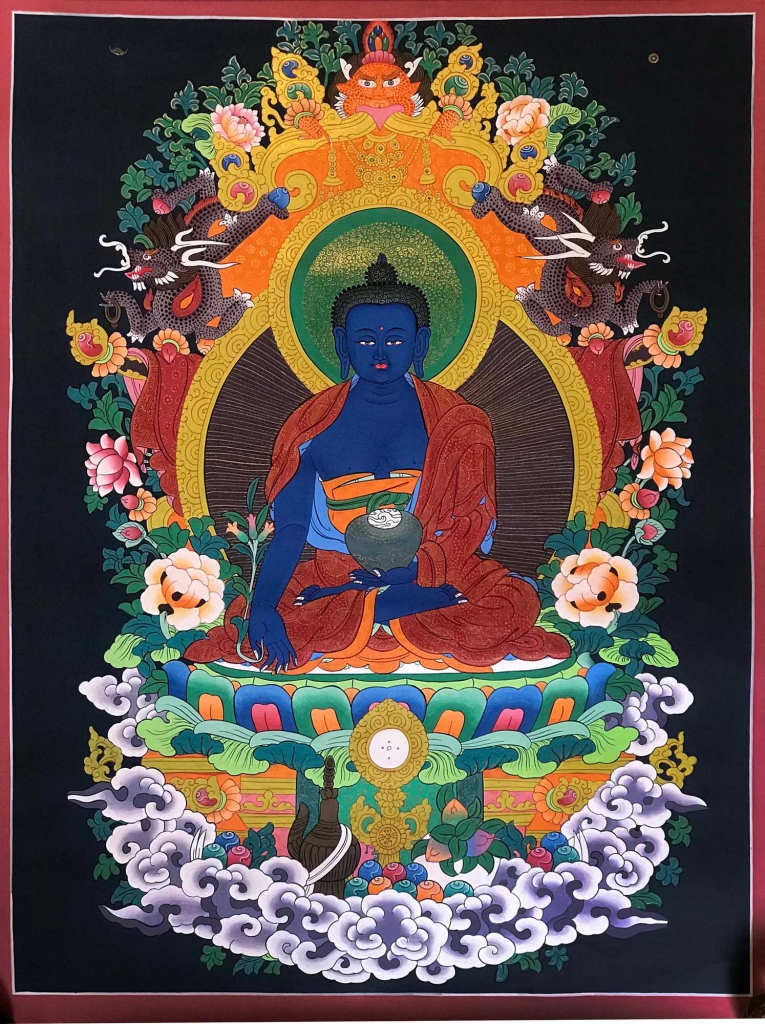 Buddha is Enlighted one. Life of Buddha begins in Lumbini, Nepal, about 2,600 years ago, where the man Siddharta Gautama was born. Buddha is the founder of Buddhism.

3
Oct
2021
Art, Himalayan Art Pratima
The wheel of life has also termed the Wheel of becoming or the Bhava chakra. The wheel of life is the mandala which represents the complex pictures of Buddhist views of the universe. Buddhists believe that the existence of the cycle of our life, death, rebirth, and sufferings seeks to escape together as a whole. According to Buddhism, the wheel of life is divided into five or six states or realms, into which a .
Read More

2
Oct
2021
Art, Himalayan Art Pratima
Dalai Lama is the most recent in the huge line of lraders of Gelug branch of Tibetan Buddhism. He is considered to be an exemplification of Avalokiteshvara or Chenrezig, the Bodhisattva of Compassion, and thus the defender of Tibet. Bodhisattvas are realized beings inspired by a wish to realize Buddhahood for the advantage of all sentient beings, who have vowed to be reborn within the planet to help humanity. In 1578 the Mongol ruler .
Read More

8
Sep
2021
Deities, Jambhala Samiksha
Jambhala, Black (Tibetan: dzam bha la, nag po), a wealthy deity popularized in Tibet by Bari Lotsawa and the Kashmiri teacher Shakyashri Bhadra. Black Jambhala is known by Kubera in Hinduism. Kuber is the god of wealth. Originating in ancient India, he appeared from the river’s waters and passed on the ability to generate wealth to a monarch whose realm was experiencing severe financial troubles at the time. He also helps the impoverished and .
Read More

1
Sep
2021
Art, Mandala, Thangka sadiksha
Applique Thangkas is Known as göchen thangka in Tibet. The Huns of Central Asia were the first to use applique to decorate saddle blankets. It traveled eastward along the Silk Road, and Tibetans accepted it as a holy art form. Fabric thangkas were created in the 15th century utilizing an indigenous applique method. These thangkas, which are lavishly embroidered and appliqued, immediately became popular in Tibet. Because of its excellent quality materials, durability, suppleness, .
Read More

7
Jul
2021
Art, Deities, Vajrapani sadiksha
The applique thangka of vajrapani is created using hundreds of hand-cut and embroidered pieces of satin and brocade silk, stitched together with Mongolian horsetail.  This applique is handmade by following traditional methods of strictly adhering to the proportions of deities as they are laid down in Buddhist scripture. About the Applique Vajrapani is revered as the embodiment of power and the keeper of the Buddha’s tantric teachings. He was given the mission of vanquishing .
Read More

7
Jul
2021
Deities, Vajrapani sadiksha
Vajrapani is one of the earliest and most recognizable characters of Buddhist art. He is known for carrying a vajra scepter and being a close attendant to the historical Buddha according to the Mahayana Sutras. In Vajrayana, Buddhism Vajrapani is entrusted to safeguard all of the Tantra literature and in this regard, he is known as Guhyapati – the Lord of Secrets. Different Forms of Vajrapani Vajrapani manifests in a variety of forms and looks, ranging .
Read More

1
Jul
2021
Art, Himalayan Art Samiksha
Guhyasamja is one of Vajrayana Buddhism’s most fascinating, difficult, and essential personalities. It combines various important tathagata Buddhas, into one sculpture. It is predominantly is call Akshobhayavajara which is the form of Akshobhaya buddha. Guhyasamja is the foremost meditational deity of the Method-father class of Anuttarayoga tantra. Guhyasamaja has two main traditions, the Arya (Nagarjuna) Lineage, and the Jnana (Jnanapada) Lineage. There are three principal iconographic forms of Guhyasamaja; Akshobhyavajra (blue), Manjuvajra (orange), and .
Read More

22
Jun
2021
Awakening Thoughts, Buddha Quotes Samiksha
Prince Siddhartha Gautama was born in the 5th or 6th Century BC in Nepal. In his 20s, the prince experienced realities of the outside world that led him on a quest for enlightenment. He left the palace to search for it and eventually attained enlightenment. It was then that he became Buddha. Until he died at the age of 80, Buddha taught many people how to achieve enlightenment. His doctrines eventually became what is .
Read More

15
Jun
2021
Mantra Samiksha
Samantabhadra (Sanskrit: ; lit. “Universal Worthy”, “All Good”) is a Buddhist bodhisattva who is linked to practice and meditation. In Mahayana Buddhism, he forms the Shakyamuni Triad with Gautama Buddha and the bodhisattva Majur. He is the patron of the Lotus Sutra and is said to have taken the 10 great vows that form the foundation of a bodhisattva, according to the Avatamsaka Sutra. Who is Samantabadra? In Mahayana Buddhism, Samantabhadra is a bodhisattva .
Read More