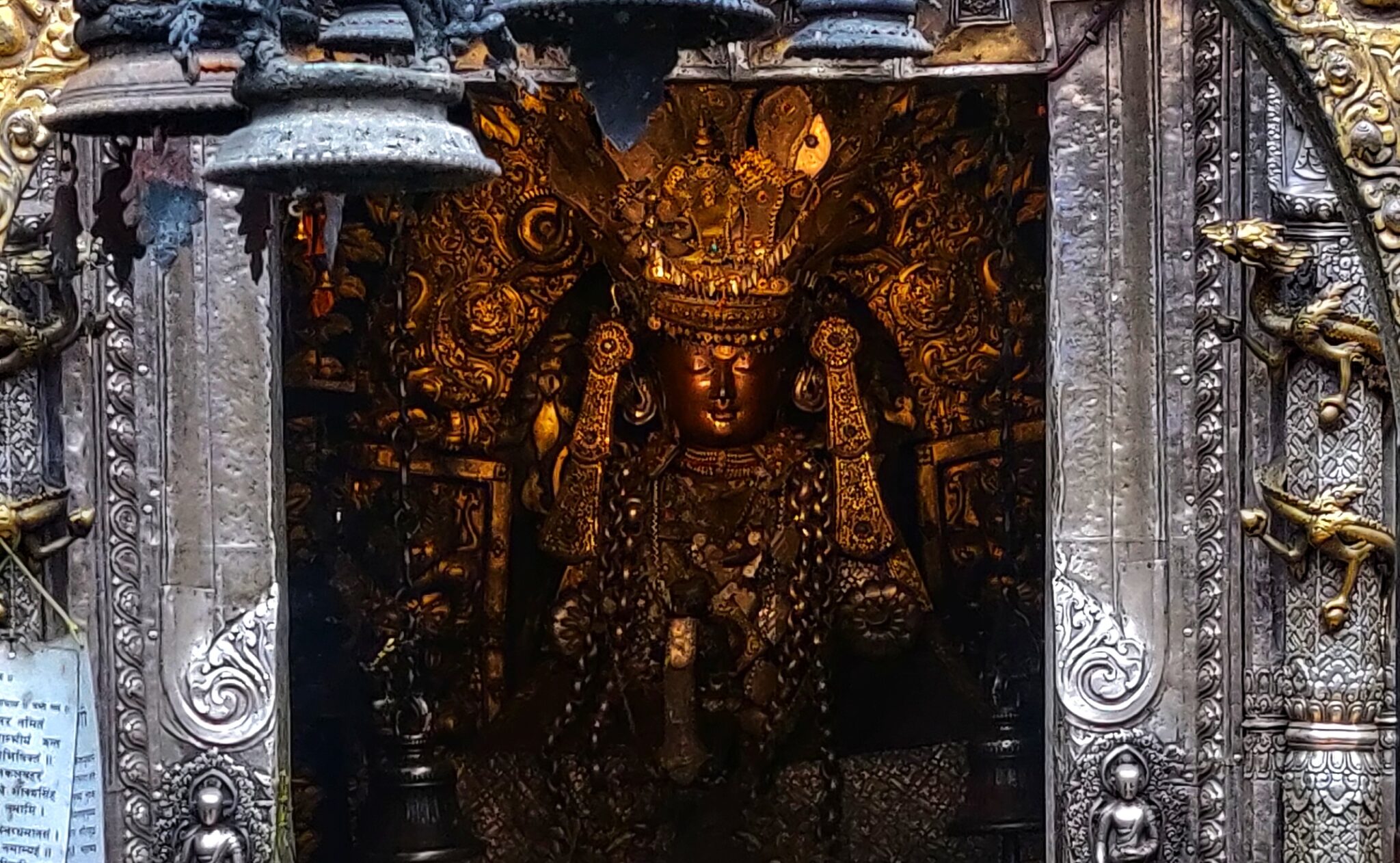 The golden temple and its sublime architectural design, the marvelous artefacts and engrossing stories have startled the minds of visitors and left them pondering for years.

There are many shrines dedicated to Buddhism in Patan and you don’t have to be practicing Buddhism to appreciate the architectural significance of the awe-inspiring monuments where visitors can find solitude and peace. The Hiranya Varna Mahavihar, “gold-colored Great Monastery”, also known as the ‘The Golden Temple’, a three-storey golden pagoda is one of the most revered monasteries in Nepal and one of the most famous landmark shrines in the heart of the historic old city of Patan.

The monastery’s famous gilded golden roof has given this monument the popular name of “the golden temple” or “gold-colored Great Monastery. The monastery is not just an architectural marvel, but also is a place of worship. The sacred site is dedicated to Guatam Buddha and there is a beautiful golden image inside the walls of the pagoda temple. The Buddha’s shrine holds both historical and mythological importance.

The shrine’s architectural design and the spectacular artefacts

The magnificent stone entrance to the monastery is guarded by 2 stone lions, a male lion and a female lion distinguished by human breasts. They are believed to be doorkeepers that keep evil spirts at bay. Once you enter the temple premises you can see a tute dhara or jahru, a traditional drinking fountain placed on the walls of the main entrance.

The drinking fountain has already dried up but it must have been gushing with water in medieval Nepal. There are exquisitely carved mandalas inside the complex and some mandalas are even mounted on the ceiling of the entrance way. The door of passage entryway also has a colourful image of Bhairava, which can be seen from the inside when the door is shut.

The monastery is a feast to the eyes from every angle. There are distinctive brass statues like the two large guardian elephants with riders on top at the entrance way. The visitors can sit on the falchas (traditional resting places), taking in pleasurable aromas of the scented smoke from burning incense and listening to the powerful Buddhist chants that can transport them into another world. A stairway leads to an upper-floor where you can see a ritual prayer room with practicing monks.

The beautiful art and architecture inside the complex give visitors an insight into the rich history and culture of medieval Nepal. There are antique brass statues of monkeys holding fruits as offerings, along with statues of Lokeshwaras and Manjushree.

There is a second entrance to the golden temple, from the courtyard of Nagbahal as well. There is an interesting story how the place got its name nag (snake) bahal (courtyard). There is a painting of a giant snake, representing a naga –a serpent god in the eastern side of the courtyard in Nagbahal, Patan. According to local folklore, Nagbahal was home to a serpent god, a protector of the Kathmandu Valley in ancient times.

A King’s dream and the Monastery’s construction

Historically, the temple is believed to have been built by King Bhaskar Varman. There are mythological fables related with the construction as well. One night, King Bhaskar Varman is said to have had a dream of a golden mouse running around a temple chasing a cat.

Next morning, he witnessed the miracle of a golden mouse chasing a cat at the same location of his dreams and he built the Buddhist temple at the exact location. Every morning a certain amount of rice is kept at all four corners inside the temple to feed the mice which are said to live there. This is an age-old practice related to the legend of the miraculous mouse.

The story of the child priests

The most captivating fact about the golden temple is that main priest of the temple is a young boy under the age of 12 and only he is entitled to perform the most sacred religious rites. The young priest serves for a month before handing over the duty to another young boy.

According to a legend, during the war between two great kingdoms of the Kirants and Lichhavis, nobody dared to venture out of their homes. So, the Buddha’s statue at the temple couldn’t be worshipped. A religious Buddhist family from Yala (old name of Patan) decided to send their child, a young boy, to wash the god’s statue believing no one would hurt a child. Sneaking past the warring soldiers, the child arrived at the temple and set the pot of water at the door.

The innocent child thought Gautam Buddha would wash himself like everyone else did. He repeatedly called out the Buddha but the he did not appear. The boy was heartbroken and began to cry. The god took pity on the child and performed his ablutions himself, leading to the tradition of young priests in the temple.