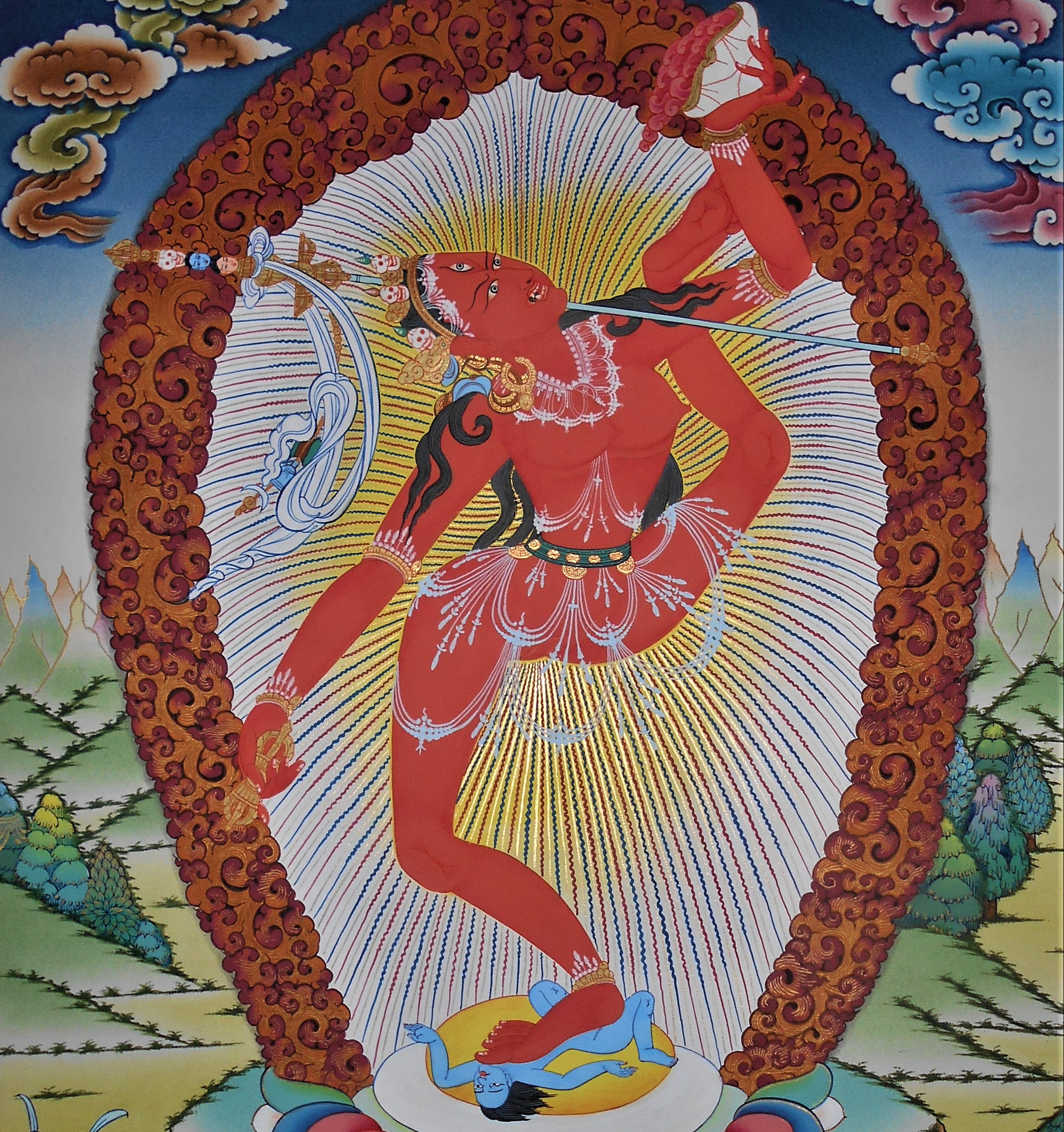 I found the story of Vajravarahi (Tibetan: Dorje Pakmo) very interesting and wish to share it here. She is another form of powerful female Buddha Vajrayogin.

Vajravarahi is a Dakini & spiritual energy perceived to transmute the Five Negative Afflictions which represent five obstructions which obscure the true nature of the life & obstruct Buddhists as they seek illumination as they journey to enlightenment.

In her form as Vajravarahi, when she is known as ‘the Vajra Sow’ she is often pictured with a sow’s head on the side of her own as an ornament and in one form has the head of a sow herself. Vajrayogin is often associated with a triumph over ignorance, the pig is associated with ignorance in Buddhism. This sow head relates to the origins of Vajravarahi from the Hindu sow-faced goddess Varahi.

The iconography of Vajra Varahi

Each of these Wisdom Energies has a unique association with one of the Five Buddha Groups.

The Gesture of Vajra Varahi

Her threatening Tarjani hand gesture also known as Karana mudra is made with a raised index & little finger & by folding the other fingers usually around an object represents her energy aimed at clarifying ignorance. In this case, she clasps a flying knife [Skt. Kartika] symbolizing her breaking the power of materialism. The word Kartika comes from the name of Shiva’s Son.

Her right-hand pours self-regenerating uterine blood into her mouth from a skullcap representing her independence from the material world …including men.

Vajravarahi is painted with a magical tantric staff leaning against her shoulder & which has impaled three heads. The first blue head is a fresh severed, the second redhead is in decay and the third a white skull.

Vajravarahi stands in satyalida position with one leg held aloft & the other trampling on the deity Kalatri representing the ego.

She wears a necklace of fifty human heads as a symbol that she vanquishes the fifty negative emotions or ‘forms’ she has overcome.

She is shown in a celestial dance position upon an orange sun disc associated with the feminine wisdom aspect & on a Lotus Throne representing Great Bliss, and her overall figure is surrounded by a circle of flames of immaculate consciousness.

The trees in the left foreground are the Ashoka Tree. The word Ashoka means without sorrow & is the tree linked to the Vedic God of love & sexual union Kamadeva. Apparently, the tree blossoms when a virtuous lady touches it.

She has boar head which shows an ancient link with the Hindu deity Vishnu. Varaha has a boar head & is one of Vishnu’s eight incarnated forms In Hinduism his consort is Bhu Devi.

She wears three flayed animal skins which relate to the original three poisons traditionally painted in the center of the Wheel of Life sometimes known as the Jivan Chakra.