Types of Brushes used in Tibetan Art – Construction and its maintenance

Types of Brushes used in Tibetan Art – Construction and its maintenance

The brushes (pir) used by our main informants consisted of a brush tip of fine animal hairs attached to the pointed tip of a characteristic type of wooden handle. Brushes constructed in this manner contrast sharply with the Chinese style of paintbrush used throughout East Asia. The latter was usually made by bundling the brush hairs together and inserting them as a plug into a hollow-ended handle. Although many Tibetan artists were familiar with Chinese-style brushes, most applied their colors with brushes of the distinctively Tibetan “point-construction” type that they or their assistants made.

The process of brush making began with the preparation of a suitable brush handle (pir mda ‘). Most handles were made from twigs of juniper (shugs pa) or coniferous trees such as pine (thang shing). Occasionally an artist might also make a particularly fine brush using a rare wood such as sandalwood. In general for brush handles the artists preferred the woods of wholesome or medicinal trees (sman shing).

The artist began by whittling a suitably sized stick of wood into a tapering shaft. When the basic handle shape had been achieved he concentrated on carving down the last half inch or so of the thicker end of the handle, to produce a sharp projection that jutted straight out from the end of the shaft. This projecting point would serve as the base around which the hairs were arranged and tied.

In Central Tibet the painting tips of thangka painting brushes were commonly made from cat and goat hair. Our main informants made their finest brushes from cat hair. Painters from Eastern Tibet similarly asserted that cats provided excellent hairs for brush making, but they preferred the hairs of wild cats (ri’i zhim). Many painters also valued the hairs of the sable or weasel.

Hairs used for brush making had to be straight, glossy and resilient. For medium-sized brushes such as those used for applying the main coats of color (byug pir), some artists used to collect suitable hairs from kid goats. In Tibet, the best goat hairs grew on the front hooves and’ muzzle of the animal, hairs from other parts of the goat were too long or curly.

Tibetan artists living in non-mountainous parts of India or Nepal now have to look higher on the goat’s flank for suitable hairs because in the warmer climate the hairs on the hooves and muzzle are too short. Larger brushes were sometimes made from fine horse hairs, gathered from within the mane or from the chest or abdomen of the horse.

For the small outline brushes (bead piT) a finer hair was required, and this was usually obtained from the pelts of cats, wild cats, and sables. Good hairs could be chosen by blowing gently onto a piece of the animal’s fur and selecting those hairs which remained erect.

These upright hairs were more resilient, producing a brush tip that was very pliable and suitable for fine line work. These hairs occurred in the greatest numbers at the back of the neck, along with the spine and at the base of the cat’s back, just above the tail.

After a suitable brush handle was prepared and a sufficient number of hairs had been gathered, the artist sorted the hairs according to length and coarseness, quickly rejecting any obviously defective ones. He then selected a number of good hairs – depending on how many were necessary for the brush he planned – and arranged them with all of their tips pointing one way. The artist had to distinguish the natural taper of the hair from the cut end or the bulb of the root since only the natural tip was suitable for painting.

The next important step in the process began with the gathering of all of the selected hairs into a single tuft. For a good brush tip (pir kha) the ends of the hairs within the tuft had to be brought to about the same level, so the painters usually dropped the cluster tip-end first into a small cylindrical hole of an appropriate size, such as the hole at the end of a sawn and smoothly rounded bamboo section, and tapped the container to make all the hair ends fall to the bottom of the hole.

For this purpose, any other object with a suitable hole could also be used. Some painters, for instance, employed a fired slab of clay with a number of holes of different diameters and depths specially pressed into the clay before firing. The holes could not be too deep, because the root ends of the hairs had to project for easy removal. Furthermore, the sides of the hole had to be smooth so that the hairs could fall easily to the bottom without catching on the sides.

Often the hairs would by themselves become tangled together or caught on the sides, and to prevent this the artists commonly added a pinch of fine ash dust before dropping them into the hole. Thus dusted they would usually fall to the bottom after just a few taps.

The Care of Brushes

Because the brush hairs were usually attached to the handle only by thread and size and were not as a rule cemented in place with a waterproof glue, the artist had to treat his brushes with care. The brushes were not left soaking for long periods of time, nor were they used to stir colors.

It was also best to clean them immediately after use. Some painters were noticeably gentle when handling and cleaning their brushes; we observed one painter carefully washing his brushes by pouring a little clear water into the palm of his hand and then slowly rotating the brush in this water to loosen the paint. Next, he thoroughly rinsed the brush in some new water and then formed the brush tip into a good point before putting it away into the container he used for storing his brushes.

Another Variety of Thangka-Painting Brush

The above type of brush with the hairs attached to a projecting point on the end of the handle was by far the most common type used in thangka painting. In addition, we met a small number of painters who used brushes that resembled, at least superficially, the Chinese ink-painting type.

For example, the painter Gompo from Kyirong constructed his brushes by bunching a tuft of hairs into a plug, which he subsequently stuffed into a hollow brush handle. He had experimented unsuccessfully with quills for handles but ended up mainly using hollow bamboo sticks that had been cut near the joints to make a receptacle for the hairs.

A special type of brush also deserving mention was a large horse-hair brush used by the painter Jampa from Lhasa. This brush was used for whitewashing or coloring walls and other large surfaces. The brush was large – about a foot long and one and one-half inches thick. A noteworthy feature of this brush was that its construction allowed the painter to trim its tip again and again.

The brush was made from a sheaf of long hairs from the mane of a horse. The maker began by laying the hairs parallel and then arranging them in a cluster. Next, he dipped the cluster in glue, and when the glue had partially dried he wound a string around most of the length of the hairs.

When the bundle of hairs had completely dried the artist or brush-maker sewed a piece of sheepskin leather over the part of the sheaf of hairs that had been wrapped with string, leaving a few inches of hair extending beyond the leather to serve ‘as the brush tip. After the leather had been moistened and dried, it would shrink and make a firm handle. 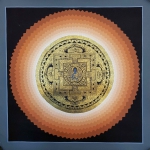