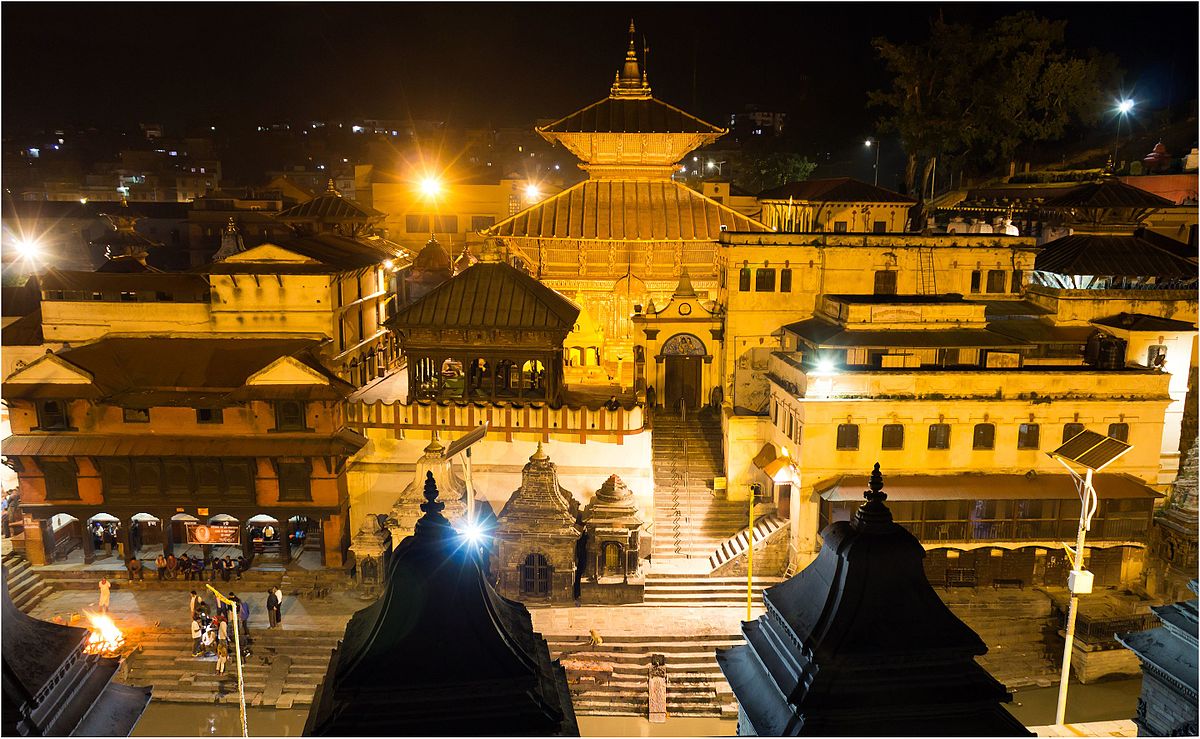 Pashupati Temple is of the most sacred Hindu temples of Nepal. Pashupatinath Temple is located on both banks of Bagmati River on the eastern outskirts of Kathmandu.

Pashupatinath is the most important temple dedicated to god Shiva. Every year this temple attracts hundreds of elderly followers of Hinduism.

They arrive here to find shelter for the last several weeks of their lives, to meet death, be cremated on the banks of the river and travel their last journey with the waters of the sacred river Bagmati, which later meets the holy river, Ganga. Hinduists from every corner of Nepal and India are arriving here to die.

The main temple of Pashupatinath is a building with a bunk roof and a golden spire. It is believed that those who die in Pashupatinath Temple are reborn as a human, regardless of any misconduct that could worsen their karma. The exact day of their death is predicted by astrologers of the temple. If you are attracted to the places where the spirit of death can be felt, then consider Pashupatinath as your first destination. It is a temple with the special atmosphere of death; death is present in almost every ritual and every corner of it.

It is located on the Western bank of Bagmati and is considered a masterpiece of Hindu architecture.

It is a cubic construction with four main doors, all covered with silver sheets.

The two-storied roof is made from copper and is covered with gold. This richly decorated temple with wooden sculptures is believed to make wishes come true. One of the most astonishing decorations of the temple is the huge golden statue of Nandi – Shiva’s bull.

Only followers of Hinduism can enter the main temple, but all the other buildings are available for foreigners to visit. From the Eastern bank of the river, the main temple can be seen in its whole beauty. The western bank of Bagmati also hosts the so-called Panch Deval (Five temples) complex, which once was a holy shrine but now serves as a shelter for destitute old people.

Numerous religious buildings are also located on the eastern bank of Bagmati, most of them are devoted to Shiva. The majority of these buildings are small single story constructions made from stone. From the outside, these buildings are reminding crypts, but in reality, these are sacral buildings, created for holding the symbol of the deity Shiva – lingam (erect phallus). Lingams can be found all over the complex.

Along the right bank of Bagmati, numerous platforms for funeral pyres are built. The cremations on these platforms are a common activity.

Another culturally shocking thing in Pashupatinath is the image of local women washing clothes downstream the river. The waters of Bagmati contain animal fat because of the ashes of cremated Shiva followers and easily wash the dirt from linen. It is believed that this is how the soap was invented.

As far as Shiva is considered the patron of animals and all living organisms, monkeys and deers are wandering all around the temple complex on both banks of Bagmati. Monkeys are very often unfriendly, they beg for food, snatch things from careless tourists and may even be dangerous.

The exact date of Pashupatinath’s construction is unknown. Despite this fact, the Pashupatinath is considered the oldest Hindu temple of Kathmandu.

The earliest evidence of the temple’s existence dates back to 400 A.D. The current main temple of Pashupatinath complex was built at the end of the 17th century to replace the previous one, destroyed by termites.

Countless smaller temples were constructed around the main temple on both banks of Bagmati River during the last few centuries.

There are numerous legends, connected with the construction of the temple. The most famous one claims, that the temple was built on the site where Shiva lost one of his antlers, while he was in the guise of a deer. He and his wife arrived in the bank of Bagmati and amazed by the beauty of the site decided to change themselves into deers and walk in the surrounding forests.

After a while gods and humans decided to return them to their duties, but Shiva rejected to return and they had to use force. In the fight, Shiva lost one of his antlers, which later became the first lingam worshipped by Hinduists in Pashupatinath. Later this relic was lost, and according to another legend, found again by a herdsman, whose cow showed the location of lingam by irrigating the place it was buried with her milk.

Pashupatinath is a place where century-old Hindu rituals are practiced in their astonishing initial form, giving a chance to the visitors to feel the unique spirit of Hindu traditions of life, death, and reincarnation.

Shiva, also known as Mahadeva, is a popular Hindu deity, regarded as one of the primary forms of God. He is considered the Supreme God in Shaivism, one of the five primary forms of God in the Smarta traditions, and grouped in the Trimurti, with Brahma the creator, Vishnu the preserver, he is designated “the Destroyer” or “the Transformer”. Shiva is represented in a variety of forms: in a pacific mood with his consort Parvati and son Skanda, as the cosmic dancer, as a naked ascetic, as a mendicant beggar, as a yogi, and as the androgynous union of Shiva and his consort in one body, half-male, and half-female

Are animals sacrificed at Pashupatinath Temple in Kathmandu, Nepal?

No, animals are not sacrificed at Pashupati Temple in Kathmandu Nepal. To begin with, Pashupatinath literally translates to “Lord of Animals “. Pashupatinath is considered the savior of all animals. So there’s no way for any sacrifices to take place in the Pashupatinath area or its vicinity.

Why does the Pashupatinath temple in Kathmandu, Nepal, need an Indian Priest?

The current four priests at the Pashupatinath temple, Nepal are all Indians. They are chosen by the Rajaguru of the temple, they are all Indians because they have the extensive Vedic knowledge and the temple doesn’t have any successor(hereditary) but they are checked upon their knowledge on the rig and Sama Vedas.

Knowledge is Power plays a role here too! More knowledgeable goes to this temple as a priest and the current four are from Karnataka. The mutts in Karnataka are very famous for priests who are highly respected for their in-depth knowledge on scriptures and Upanishads. These mutts are located in Udupi and the priests belong to the Bhat community.

This tradition was started by the Malla kings of Kathmandu in the 17th century and hence has continued till today. The three or so priests called the ‘Bhatt Pujaris’ it is stated has to come south of the Vindhya hills, must belong to Telangana Smarta sect of Panch-Dravid Brahmins. Only the main priest ‘Mul Bhatt’ has the right to touch the Shiva lingam inside the temple. Other than these 3 or so Indians, the other several assistant priests and treasurers/patrons of Pashupatinath according to tradition must be the local Newars who specifically must belong to Chathari (Kshatriya) Rajbhandari clan (of Bharadwaj gotra) who must be born in Devpattan area (present-day Deopatan to Chabahil.) There are several other smaller temples inside the Pashupatinath area where the priests are all Nepalis (mostly Newar Rajopadhyayas, Mishra, Tantric Achajus or Karmacharyas as well as Pahade Bahuns or Sanyasis). So for centuries, this tradition has been continued, and Nepalis, in general, do not want this to change.

The Selection of Priests at the Temple

Priests are selected from a group of scholars educated by Shri Shankaracharya Dakshinamnaya Peeth Sringeri on Rig Vedic Recitation, initiated in Pashupati Yoga by Kashi Math, Shiva Agama and learned Recitation of Samaveda from Haridwar. After qualifying and fulfilling all those criteria they will be selected for Priesthood by Raj Guru of Pashupatinath Temple undergoing strict examination on Vedas and Shiva Agamas and then the qualifies are sent to Kathmandu for performing Puja and Daily Worship of Lord Shri Pashupatinath This tradition is reported to have started by the request of Adi Shankaracharya in the 8th century, who sought to unify the different states of Bharatam  by encouraging cultural exchange.

Protests have happened in Nepal to remove the Indian priests and replace them with Nepalese but the temple trust decided not to mix politics with religion and the attacked priests were given protection.