The Sacred Composition of Colors in Tibetan  Art 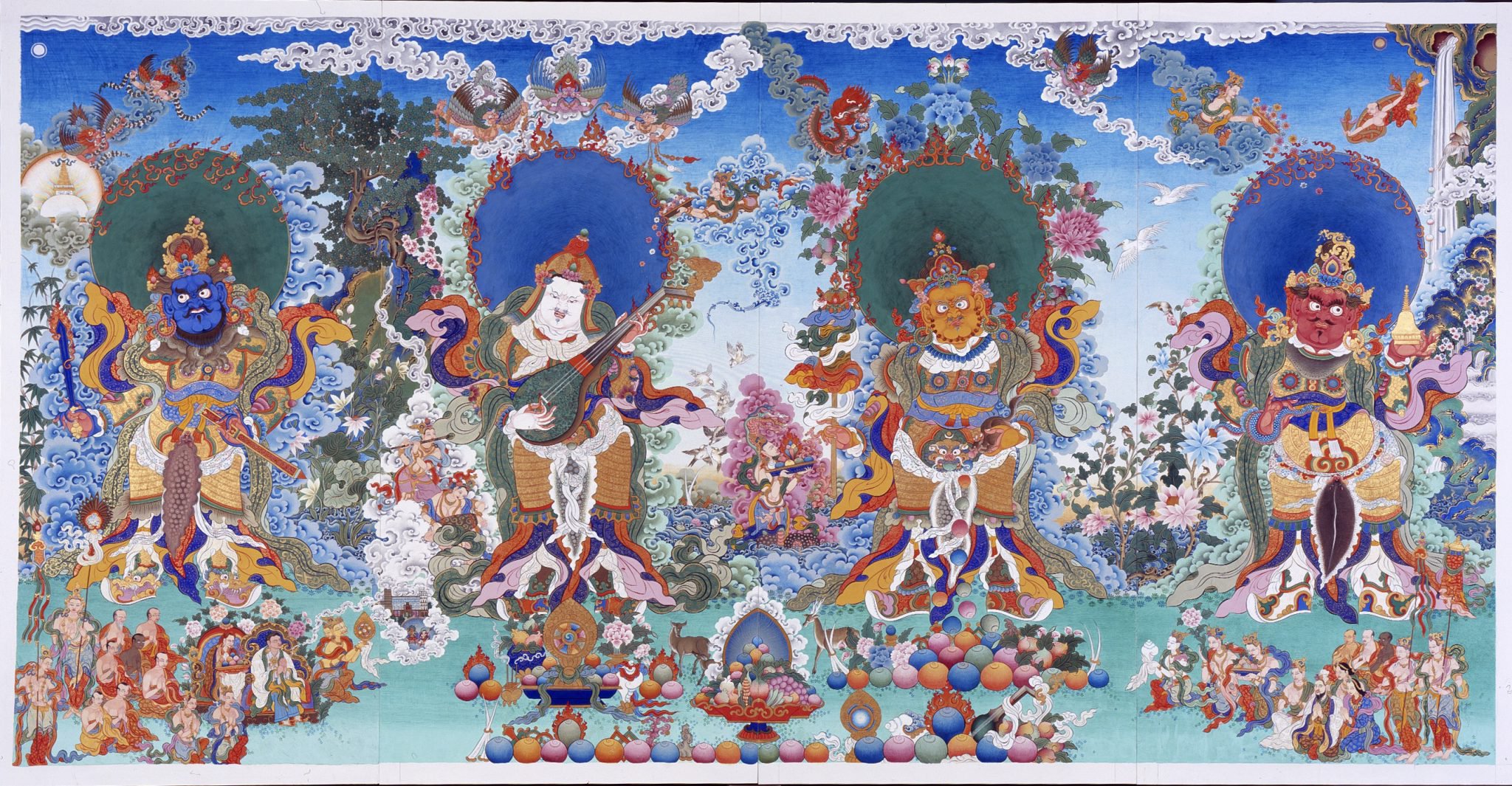 The Sacred Composition of Colors in Tibetan  Art

The thangka painter’s palette consisted mainly of paints derived from the mineral pigments . Tibetan artists also made some of their paints by mixing the pigments with organic dyes and lakes such as indigo and lac dye. Important mixtures of this type included the blending of each of these two dyes with white. But since the dyes and lakes were mainly used during the shading and outlining stages that followed the initial application of colours.

This artist made many of his paints simply by mixing the above pigments with the size binder. However, like all Tibetan painters he also made a number of important shades by mixing these main colours with white and with each other. He had learned how to prepare these mixtures from his teacher and from his own practical experience.

Although most of the pigments were compatible with each other, a few could not be mixed with good results. For instance, Sum pa mkhan po and Mi phamrgya mtsho mentioned that orpiment and green should not be mixed or come into contact with one another. They also stated that a little vermilion can darken and spoil the orange colour of minium.

The mixing of colours (tshan tshas gzhi tshan mdog) also had a theoretical side, and Tibetan writers on art gave different accounts of the basic and derivative colours. Among the several colour theories current among Tibetan painters during the long history of Tibetan art, one was the system described by the 15thcentury scholar Bodong Panchen. In this system there were only five basic colours (rtsa bai mdog). All other colours were said to derive from these

Another system, which is known to us through the much later writings of Sum pa mkhan po, Rong tha and Mi pham rgya mtsho, held that there were eight main colours seven father colours (pha bdun) and one mother colour (ma).  The “seven fathers” were

Obviously this system was tied to artistic practice since all but one or two of the eight “colours” mentioned were actually the names of certain pigments or dyes, and were not colours per se.

Here the colours corresponding to the six pigments were blue, green, red, orange, yellow, white, and the two dye colours were maroon and dark blue. The various colours resulting from the mixture of a “father” and a “mother” could be called their “sons” (bu).

For example, the “father” blue (mthing) when mixed with the “mother” white produced the “son” light blue (sngo skya). If white was added in greater proportions a “son” of even lighter blue (sngo se) was produced. In his text Sum-pa mkhanpo (and following him, Mi-pham-rgya-mtsho) went on to describe a total of fourteen “sons”.

In addition, there were two “older sisters” (sring ma), namely tea colour (ia kha) and smoke colour (dud kha), and also one “servant” – a mixture of vermilion and ink.

Yet another theory of colours appeared in a recently compiled textbook for Tibetan schoolchildren in India.8 This system, like that of Bo-dong Pan-chen mentioned above, speaks of five basic colours (rtsa bai mdag). However, it substituted green (liang) in the place of black (nag).

One of the best and most detailed accounts of colours and their combinations is to be found in the writings of Rong-tha Blo-bzang-dam-chos-rgya-mtsho.

As mentioned above, he was one of the scholars who adhered to a system of seven “father” colours and one “mother”. His actual description of colour mixing, however, did not follow the system of Sum-pa and Mipham in every detail, and happily it was even more exhaustive. His account is particularly valuable because it helps to establish the values of some of the rarer terms for colours that occur in other texts on art.

It was common in large projects for the master painter, when he had completed the sketch, to leave the filling in of the initial colours to his assistants or students. To indicate the correct colours to be applied to each place the artists used two systems of abbreviated notation. One common system used the numerals 1 through 5 and 7 through 9 to indicate the main colours. These numbers corresponded to the numbers and colours of ninesectioned magic squares within the sme ba dgu of Tibetan astrology

For some artists, however, the numbers 8 and 9 indicated magenta pink (zing skya) and maroonish brown (rgya smug) respectively.

The second system used the main consonantal elements of the names of the colours. The names, so abbreviated, included the following

The .latter artist also wrote out the name for yellowish brown (ser nag), but in a slightly abbreviated form senag , The systems of numbers and letters were often used in combination. For example in the same painting numbers 1, 4 and 5 might be used for white, green and yellow, and the letters tha, ma and la could indicate blue, red and orange 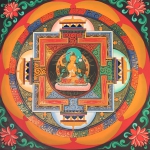 Manjushri is called as Jampeyang in Tibet. He is the Buddha of Wisdom. In this mandala, Manjushri is depicted seated within a basic mandala the divine palace of buddhas.
Buy Mandala of manjushri online