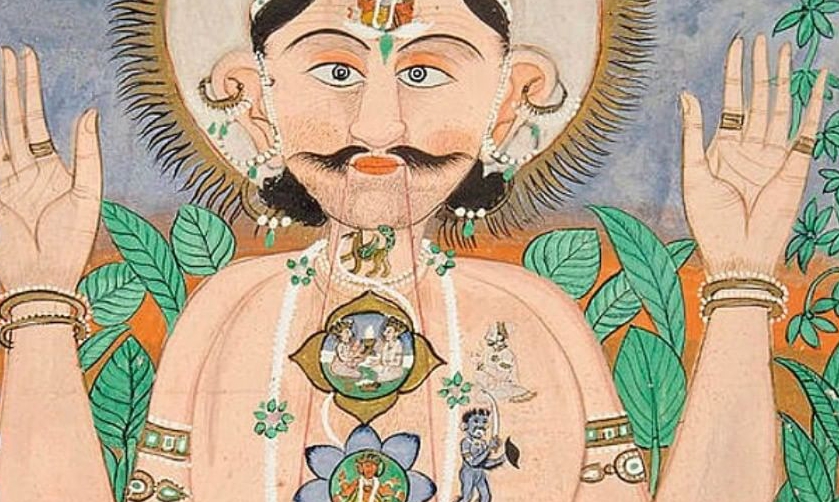 Beyond identifying features (lakhshana) or attributes

It refers to Attributeless God or Nirguna Brahman in here. This idea comes from ancient Yoga traditions originating in Swetashwetara Upanishad. This particular Upanishad deals with Yoga, Vedantic Monotheism as well as Shiva as Sat-Chit-Ananda.

Legend has it, that the slogan or elating cry for the Supreme Being was first coined by Matsyendranath. Matsyendra is popularly regarded as the “second Guru” of Nath Yoga Cult after Lord Shiva as Adinath.

He first used the words “Alakh Niranjan murmu” to denote God as perceived by a Yoga adept in known history. His disciple is known as Yogi Gorakhnath, also known as Gorakshanath, without whose mention, Nath Yoga becomes unimaginable.

It is Gorakhnath and Matsyendranath who popularised Kaya Sadhana throughout known limits of India and beyond.

Gorakhnath actually organised and assimilated most Yogis of the Hatha Yoga and Tantra Cult into the enormous Nath tradition. The city of Gorakhpur in North India is named after the legendary Yogi.

“Alakh Niranjan” became a very popular name for God all over India during and after Gorakhnath’s time. Later first Sikh Guru, Nanak used this holy name to denote God.

Whenever Yogis or Nath-Yogis meet, they greet each other with the salutation “Adesh-Adesh” Gorakshanath the Maha Yogi wrote:

In our relative thought we distinguish between

The Truth is that these three are one and a realization of it is called Adesha.

Thus the yogi in his contact with others expressed only the simple truth in the words, “Adesh-Adesh” It is a foundation stone on which all spiritual light and attainment must be erected. It is the first truth to attain the First Lord.