30
Sep
2020
Art, Design Pratima Leave a Comment
According to The Brief History of Tibetans, there was a record of engagement of carpenters to build the Jokhang Temple and Ramoche Temple in 6BC. Through thousands of years’ handworks of the people, Tibetan furniture has become a unique style, which bears artistic shapes, rich colors, and delicate craft. Tibetan Furniture is one of the greatest treasure which dates 1500 years back. Tibetan Furniture is mostly made up of pine and Himalayan softwoods i.e. .
Read More

1
Nov
2019
Culture, Deities, Gods, Meditation, Vajrayogini, Yogini sadiksha Leave a Comment
Vajrayogini is a tantric Buddhist deity who is also called as Vajravarahi in Tantric Buddhism, or Vajrayana, a tradition in which she is considered the supreme deity more revered than any male buddha. She represents the path leading to female Buddhahood. She is also a dakini, a term that describes a female supernatural being or an accomplished yogini, and is considered the queen of the dakinis. Her name comes from the Sanskrit, vajra, which means “diamond” .
Read More

26
Nov
2018
Art, Buddhism, Culture, Design, Thangka dipakdaspaswan Leave a Comment
Tibetan arts started from the rock paintings in ancient time and its subjects ranged from animal images of deer, ox, sheep, horse, etc to hunting scenes. Tibetan arts have flourished very well during the period of the Tubo Kingdom. Especially after the installation of Buddhism in Tibet, religious paintings made a more progress. Introduction to Tibetan Art The heritage of conventional Tibetan crafts and the fusion of India, Nepal and Han People’s art essence .
Read More

30
Oct
2018
Astrology, Buddhism, Culture, Himalayas, Tibetan Calendar sadiksha Leave a Comment
There are different Tibetan Festivals which are celebrated in Tibet. Tibet is rich in culture and tradition. All people enjoy festivals together to maintain harmony and love among one another. Buddhist Calendar in South Asia The Buddhist calendar is a set of lunisolar calendars primarily used in mainland Southeast Asian countries of Cambodia, Laos, Myanmar, and Thailand as well as in Sri Lanka for religious and official occasions. While the calendars share a common .
Read More 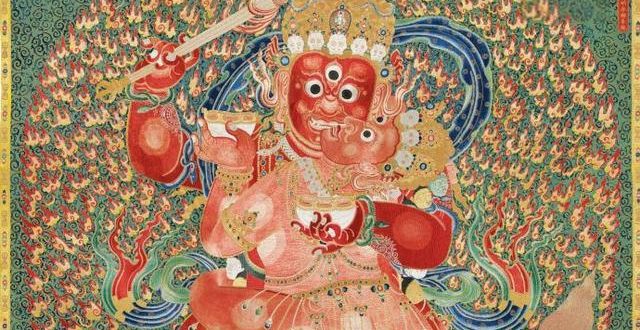 19
Mar
2018
Art, Thangka, Tibetan paintings Sadiksha Leave a Comment
There has been a record that a mandala was sold for $45 million. The tapestry is the artwork from China. How much was the thangka sold? In the year 2014, there was an auction held in Hong Kong for the Thangkas and different other artworks. The tapestry was sold to a Shanghai tycoon for $45 million (HK$348 million) at auction in Hong Kong. when seen from a distance the thangka is a shade of .
Read More

3
Feb
2018
Art, Thangka, Tibetan paintings Sadiksha Leave a Comment
The actual origin of the Thangka paintings has been a subject of confusion. Some stories claim that Thangka originated from Tibet, some claim that they have been originated from Nepal, while some claim from India. Is it Nepal? Though Thangka painting is believed to be painted in Tibet at first the real origin is from Nepal. It is because during the reign of King Songtsen Gampo in 6th century he invited artists from Nepal to .
Read More

7
Jan
2018
Biography, Buddhism, Dalai Lama Quotes Sadiksha Leave a Comment
H.H. the 14th Dalai Lama, Tenzin Gyatso, is the simple Buddhist monk. He was born on 6 July 1935 in Taktser, Amdo, northeastern Tibet. Born in a small family of Tibet, he spent the major part of his childhood in farming and kinds of stuff. He grew up to be a spiritual leader of Tibet. Soon after his birth, he was named as Lhamo Thondup that means ‘Wish-Fulfilling Goddess.’ Early Education Like every Tibetans, His Holiness .
Read More