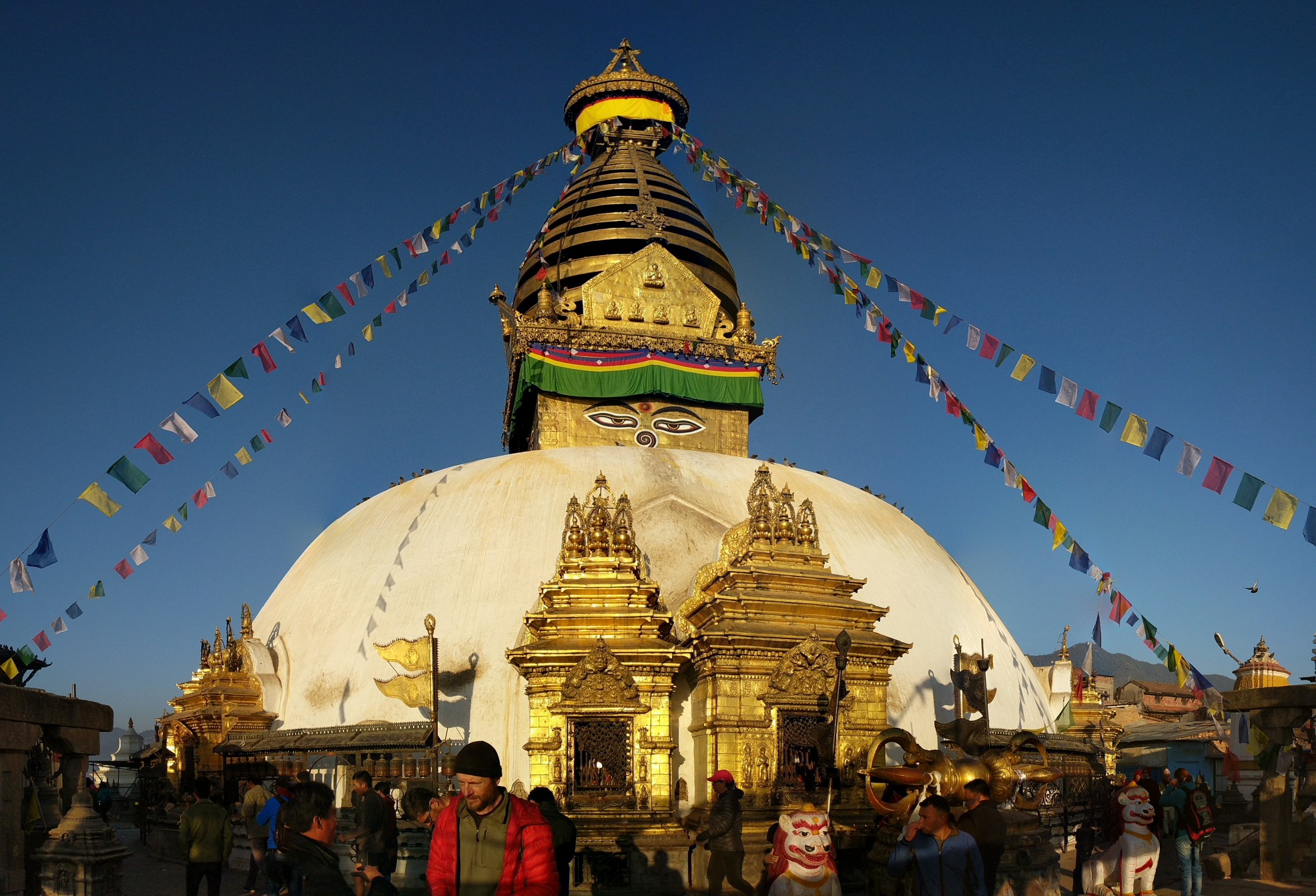 Swayambhunath is an ancient religious architecture atop a hill in the Kathmandu Valley, west of Kathmandu city. Swambhunath is also called the “Monkey Temple”. it the most sacred among Buddhist pilgrimage sites. Swayambhunath stupa is a religious site for both Buddhists and Hindus. Located at the center of Kathmandu, the stupa is situated atop a hill at 1,336 meters above the sea level and is 77 meters from the ground. You must climb 365 steps to reach the top.

Most pilgrims reach the stupa before the sunrise, light up the wax-lights and circumambulate the entire hill.

Legend has it that the stupa was self-created. When the Kathmandu valley was under water, a big lotus emerged out from it from which rose a shrine, which later became to be known as the Swayambhunath.

The architectural and artistic genius of the shrine holds many symbolic messages.

The dome represents the world. The thirteen pinnacles at the top symbolize that humans have to pass through thirteen stages of spiritual realizations for the enlightenment.

The large pair of eyes are carved on each of the four sides of the stupa, which represent Wisdom and Compassion. Above each pair of eyes is another eye, the third eye. It is believed that the cosmic rays emanate from the third eye act as messages to the heavenly beings.

On virtually every Buddha statues, Buddha heads and Buddha stupa (Buddhist shrines) from countries like India, Nepal, Thailand, Burma, China, and others, there are pairs of eyes casting down as if in a meditation state and enriched with a spiritual aura.

This style has been a model for various generations of artists while depicting them in various Buddha heads and Buddha images. In Buddhism, there are two kinds of eyes, first the inner eyes or eyes of wisdom, which sees the world of Dhamma, which is also known as the Third eye of the Buddha, while the other is called the outer eyes which are also called as material eyes which sees the outer world.

Therefore, it may be seen and understood easily that the eyes in the Buddha statues and Buddha’s heads are also of two kinds. The material eyes are the two eyes which see the outer world while the inner eyes or the one which sees the Dhamma is the one in the middle of the two material eyes. This inner eye is also known as the urna.

Eyes of the Stupas

While in stupas, there are giant pairs of eyes looking out from the four sides of the main tower of the stupa. These are also known as Buddha eyes and wisdom eyes. The eyes of the Buddha in the stupa symbolize the all-seeing ability of the Buddha.

Hence, according to Buddhism, we can say that if we are wise, we can see beyond material things. What we then see can is the truth. The world is in a muddle now because people don’t use their eye of Wisdom to see things. People are distracted and deluded by greed, hatred, and ignorance.

These desires mix them up, or bring them down and then lead us to suffer. People become distressed, depressed, anxious and suffer. These things can be called the darkness of life. Only wisdom will lead the world out of the darkness.

On virtually every stupa, which is a shrine of Buddhism, in Nepal, there are giant pairs of eyes staring out from the four sides of the main tower.

These are Buddha Eyes (also known as Wisdom Eyes), and they look out in the four directions to symbolize the omniscience (all-seeing) of a Buddha. The Buddha’s eyes are so prevalent throughout the country that they have become a symbol of Nepal itself.

Between the Buddha’s eyes where the nose would be is a curly symbol that looks like a question mark. This is the Nepali character for the number 1, which symbolizes the unity of all the things as well as the one way to reach enlightenment—through the Buddha’s teachings. Above this is a third eye, symbolizing the all-seeing wisdom of the Buddha.

Some pictures of Swayambhunath stupa and  Swayambhu Environmental Park

The main reason this place is called the Monkey Temple.