Manjushree, the God and the temples

Manjushree, the God and the temples

He is one of the forms of Bodhistawas and symbolizes the wisdom. Manjushree is considered as the founder of Nepalese civilization and the creator of Kathmandu Valley. According to the tradition, he was a Chinese Saint.

His intuition told him of the blue flame (symbolizing Adibuddha or Swayamnhu) on a lotus in the big lake of Nepal. His purpose to go there was to worship,  didn’t reach because of the water.

He cut with his sword the Southern wall of the hills. The water of the lake drained to the south. The dry valley became the Kathmandu Valley.

Manjushree carries the sword of wisdom and light in his right hand and Prajnaparamita manuscript “the book of Divine Wisdom” on his left on the lotus blossom. His left hand will be in teaching gesture (Jnana Mudra.)

The other name of Manjushree is Manjunghose, Manju Bara, Vajranga, and Vagiswawa. People believe that the worship of Manjushree can confer upon the wisdom, memory and many more.

The Bodhisattva Manjushree while meditating at the sacred mountain of Wu Tai Shan suddenly sees the dazzling Swyambhu light on a lotus. Manjushree made a tour of the mountains of China and Tibet on his blue lion to worship the lotus.

The lake seemed quite deep so he felt that if the water was drained out of the lake, the Swyambhu would become easy for accessible for human devotees. And with the help of big sword, Manjushree cut a gorge in the mountains surrounding the lake.

After all, the water was drained, the present day Kathmandu valley was formed. The lotus was then converted into a hill and the blue radiant light became the Swayambhunath Stupa.

Manjushree Temple is the small temple located in the Swyambhunath Stupa. It is near to the main temple of Swyambhu. Visited the Manjushree temple on 1 January 2015.

The temple is located on a small street, to the northwest of the West entrance gate of the Swayambunath temple, between the Whochen Choyaling Monastery and the Maitri Tibetan resto.

The temple is a clean and average size in appearance. There are prayer wheels lined towards the main temple. A lot of prayer flags are seen hanging around the temple, and venue for many monkeys as compared to the Swayambunath Stupa. Worth a quick visit if you are near Swayambunath.

There are thangkas dedicated to the Bodhisattva Manjushree. At the center of this painting, Manjushree is sitting in a meditative position, with a lotus flower in the hand.

There are others forms of gods surrounding Manjushree. 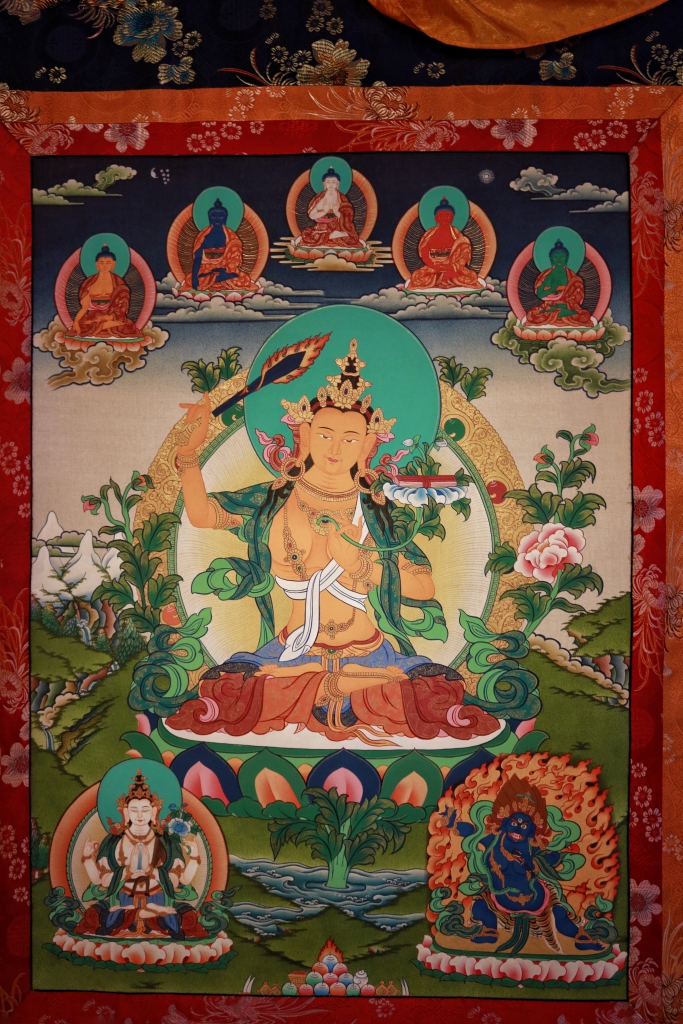