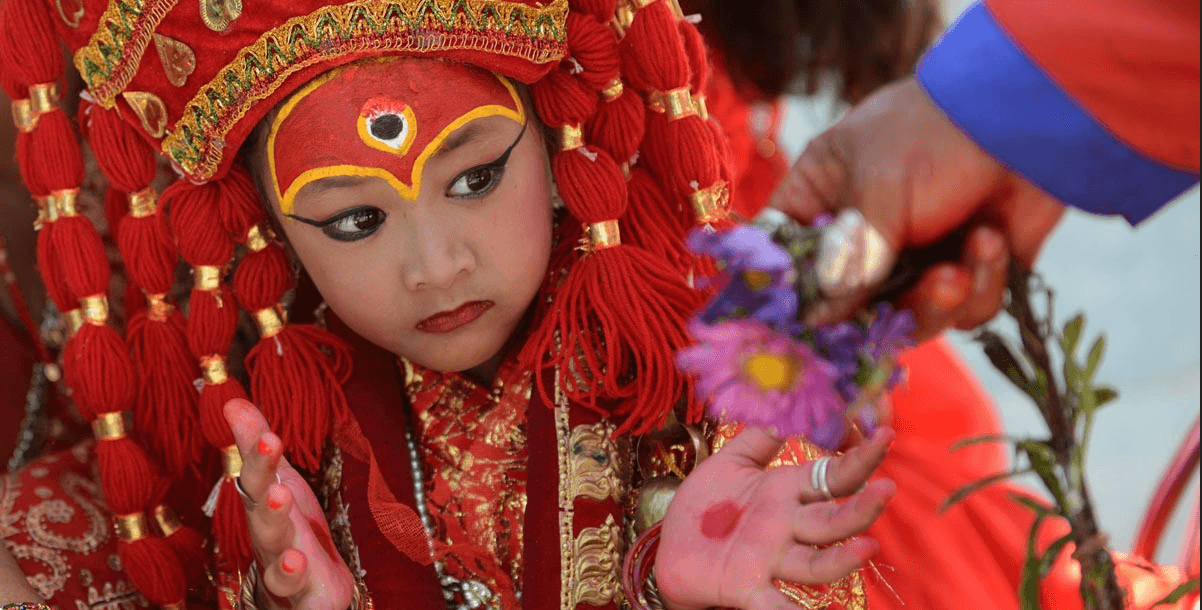 Nepal is a land of real divinity. Nepal is the land of living goddesses known as Kumari. The practice Kumari dates back to centuries, probably from the Malla Kingdom. The spirit of goddesses Taleju Vawani has been residing in form of pre-pubescent virgin girls.

Kumari is derived from the Sanskrit word Kaumarya which means princess. Kumari is worshipped both by Buddhism and Hinduism in Nepal. Most of the traditional kumari in Kathmandu are Newari girls. Every time a new Kumari is selected by the council of Newari people who then act as the manifestation of divine female energy until she hits her puberty.

Kumari is believed to be the incarnation of goddesses Taleju Vawani. She is also known as Durga. Kumari is normally elected from the Shakya or Bjracharya Clan of Newari communities. The famous Kumari in Nepal is Royal Kumari of Kathmandu and she lives in the Kumari Ghar in Basantapur. The tradition of Kumari goddesses is believed to have started from the time of King Jay Prakash Malla.

Once an existing Kumari is no longer eligible to be in the position, she needs to be replaced by the new Kumari. The Royal Kumari of Kathmandu is generally selected from Shakya or Bajracharya Clan. She must be excellent in health, should not be affected by any diseases and must not have lost any teeth. She is also tested for battis lakshans or thirty-two perfections of goddesses. Some of the peculiar features she must have are:

He must be fearless like a king. For testing the fear of the Kumari she has to go to further processes:

To ensure that she is bold and strong like goddesses Kali or Durga, she is taken to Taleju’s temple during the Kalaratri or black night. On Kalaratri 108 buffaloes or goats are sacrificed to Taleju Vawani. Several men wearing masks perform the dance during this event. The to-be-Kumari has to be fearless during this whole event. She should show no fear during the experience.

She is made to spend the night with the slaughtered head of goats and buffaloes without any fear. As a final test, she must be able to pick out the personal belongings of the previous Kumar. If she is able to do so She is selected as the new Kumari and is placed in the Kumari Ghar. She is purified by different tantric and ritual process. Finally, she is dressed as the new Kumari and then makes her way from Taleju Vawani temple to Kumari Ghar.

Life of a Kumari

A Kumari is not allowed to have much contact with the outer world. Once selected as a Kumari she will have her own set of ceremonial duties and responsibilities. Throughout her venture, she is not allowed to walk on foot. She is carried on the golden palanquin. She will be educated by her caregivers. Kumari is taken out of the Kumari Ghar on special occasions like Indra Jatra, and others.

Note: After her venture ends she is started treating like a normal kid and returned back to her parents. A small token of pension is rewarded to her.

After Matina Shakya retired as a Kumari in 2017, Three-year-old Trishna Shakya of Dallu has taken charge as the new Living Goddess Kumari.

Documentary on Life of a Kumari Goddess