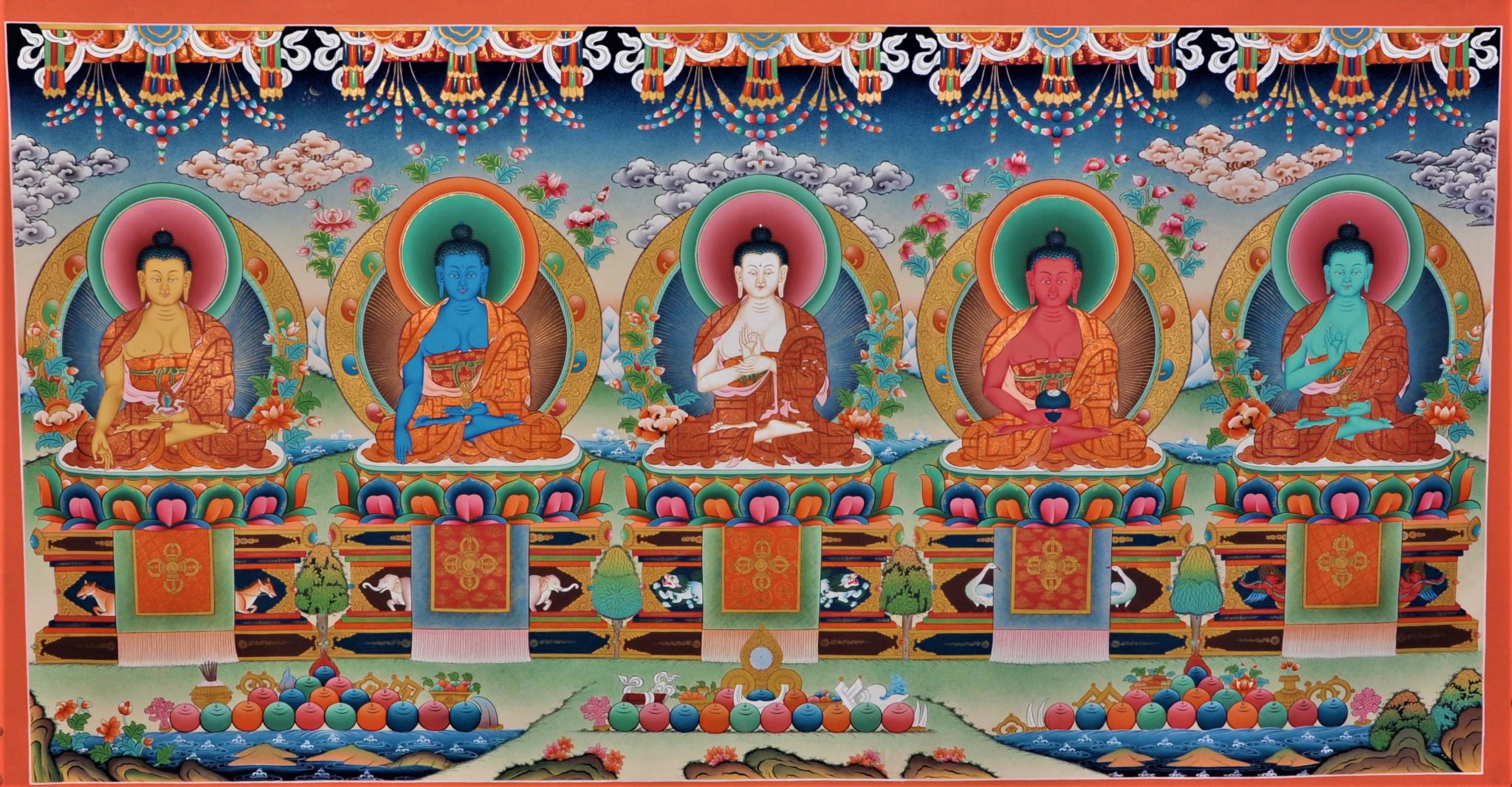 Dhyani Buddhas are believed to have taken birth after Adibuddha. There are five Dhyani Buddhas namely,  Vairochana, Akshobhya, Ratnasambhava, Amitabha and Amogasiddhi. The word Dhyani is originated from the Sanskrit root word Dhyana, meaning meditation. They are not separate figures like Gautam Buddha, or other gods but are derived from the Sanskrit dhyana, meaning “meditation.” The Dhyani Buddhas are also called Jinas (“Victors” or “Conquerors”). They are not historical figures, like Gautama Buddha, but abstract figures that symbolizes divine energy of the universe or the cosmic forces.

They are also often called Tathagata. The Dhyani Buddhas are the representation of the various aspect of the enlightened consciousness and are supposed to heal the mind and soul. In Bodhistava, they direct the spiritual transformation. Each of the Dhyani Buddha has a connection with certain attributes and symbols. Each one of them represents one of the five pearls of wisdom. This wisdom has the power to cure the five deadly poisons that are of ultimate danger to man’s spiritual progress.

Each of these guides over one of the directions of space and one of the cosmic realms of ether, earth, water, fire, and air. They are also believed to have manifest the five skandhas, elements that create cosmic existence as well as a human personality. These components are:- feeling, form, perception, volition and consciousness.

Additionally, each Dhyani Buddha is connected with a specific colour, mudra (hand gesture), a sacred symbol, the symbolic animal that supports their throne and Bija.

Names and relation to other Buddhas & Bodhisattvas

“Pancha Buddhas” are popular in Nepal. Whenever you enter the houses of Buddhist people you might notice the paintings of five Dhyani Buddhas above the entrance.

In Thangka, Vairochana appears to be in the middle of the painting, while the other four buddhas sit at the four cardinal directions. The wisdom of Vairochana is the wisdom of the essence of the dharma-realm meditation mudra.

Akshobhya is usually framed to the east, but he is also sometimes placed in the center. His power transforms the human failing of anger into clear mirror-like wisdom.

In union, these five Buddhas symbolize the five basic types of human personality and represent the absolutely perfected form of these personality types. Each of them represents a negative quality as well as the completely transformed aspect of that failing.

Vairochana is the head of the Buddha family. He is generally seen as a White Buddha, but in some traditions, he is depicted Blue in color. He holds his hands in the position of Dharma chakra; the Teaching Mudra.

In some Sutra and Tantra explanations Vairochana is seen as a universal form of Shakyamuni Buddha and therefore especially important in the early development and history of Tantric Buddhism.

As a Dhyani or wisdom Buddha, Vairocana is associated with the color white all colors of light blended together and space, as well as the skandha of form. His symbol is the dharma wheel.

He often is depicted with his hands in the dharmachakra mudra. When the Dhyani Buddhas are pictured together in a mandala, Vairocana is in the center. Vairocana also is often depicted larger than other buddhas around him.

A late Shingon mantra associated with Vairocana is known as the Mantra of Light or in Japanese as kōmyō shingon, or 光明真言. It features in the Amoghapāśakalparāja-sūtra and is often written in a circle. Below is calligraphy by Jayarava. On the right is calligraphy by Kūkai using the Chinese brush style.* Kūkai heads the mantra with vaṃ, the seed syllable of Vairocana in the Vajradhatu Mandala.

I’m unsure about the reason for the substitution of Putra for mudra.

Meaning of Vairocana mantra of light

According to Mark Unno

Praise be to the flawless, all-pervasive illumination of the great mudra (the seal of the Buddha). Turn over to me the jewel, lotus, and radiant light.

According to John Stevens

Infallible brilliance of the great mudra! Creating the radiance of the Jewel and the Lotus. 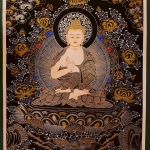