Lifestyle of Monks and their techniques of making Mandala

Lifestyle of Monks and their techniques of making Mandala

The typical lifestyle of monks rotates around chanting, meditation and doing some artistic work. There are different communities of monks in Nepal.

The Lama in these monasteries give education and people from different regions and other Himalayan countries come to receive a classical monastic education.

Little monks from the age of even from all over Nepal and other Himalayan countries are residing at this Gelug monastery, in Kapan.

It is not a compulsion for all monks to pursue a scholastic career. Most of the Buddhist monk go for pursuing their career after completing grade ten in the monastery school. While some of them continue their life a nun. They stay in the monasteries by offering the service.

Some of them might be involved in learning meditations from qualified masters. Some are more into doing artistic works like making mandalas. The way of serving may be different, but they do it to preserve the teachings of Shakyamuni Buddha in purest form for passing it to future generations.

The artistic work, Mandalas are not only made by monks but also by the professional artists. Some people do it out of passion.

The mandala is created in different ways. Painting Mandalas in papers and Sand Mandalas are two of the popular way of doing it.

For creating a sand mandala, the mandala is created of fine multi-colored sand, and then the sand grains are placed in the concentric circles. Working from outward towards center along the pattern that has been laid out. Metal funnels are generally used so that uniform amount of sand goes at a time.

We have been always confused by the fact that a mandala is used for the meditation. But then Dalai Lama, the great Buddhist master explains that the process of making a mandala itself is a meditative process.

Whether it be in a museum or in the ritual arena, the sand mandalas are not permanent. After being on a demonstration or after serving as a divine being in rituals, the mandala is destroyed. The multi-colored sand is poured back into a large container and brought back to be ritually deposited.

For painting mandalas, first of all, the symbols, objects, gods, and goddesses are sketched on a canvas paper. The sketching is done with a black ink or pencil. After the sketch is done the mandalas are painted with different kind of inks and coated with gold and silvers. 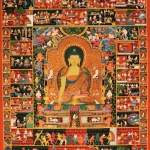