The Dalai Lama Lineage through the Himalayan Arts 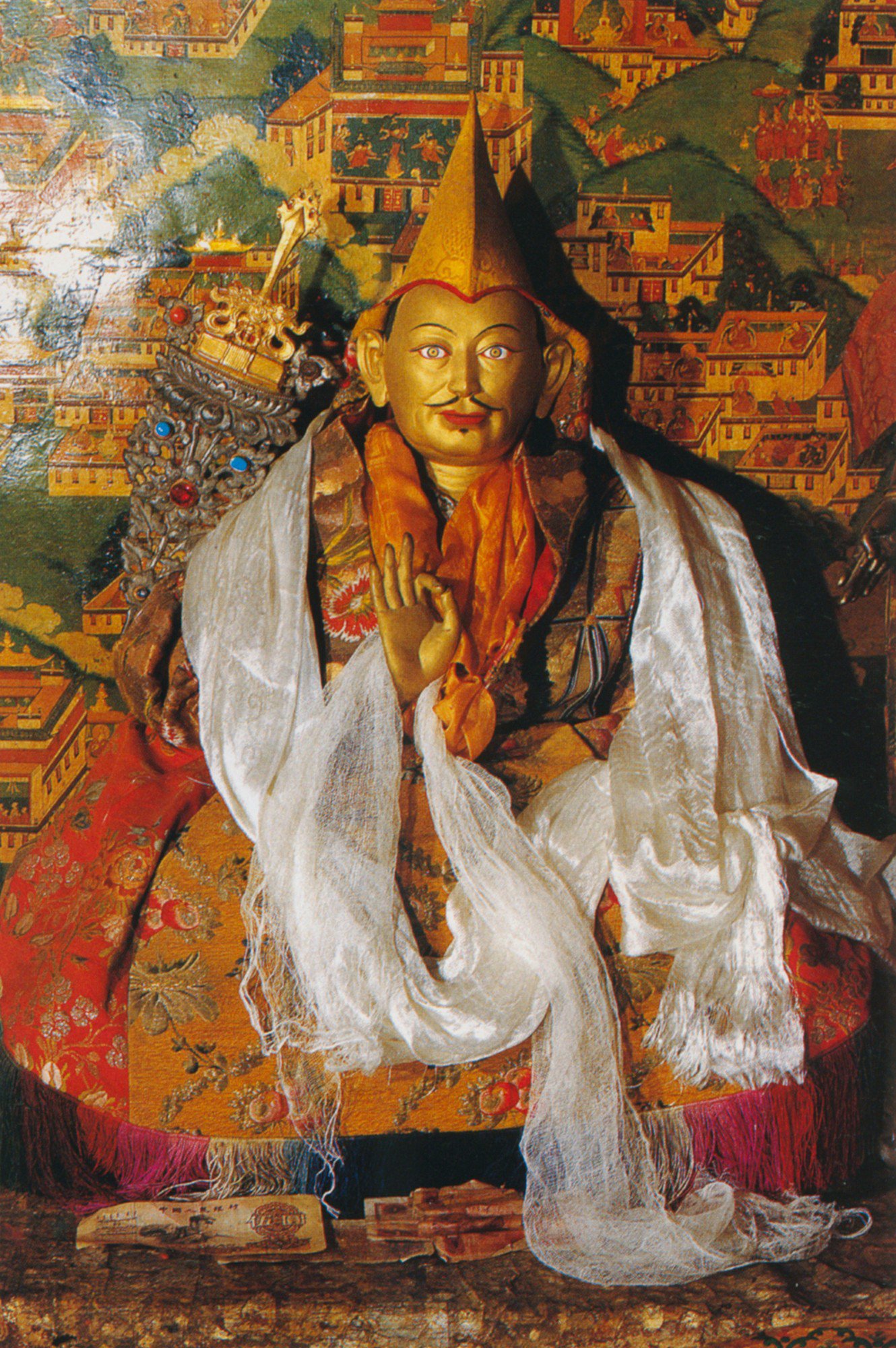 The Dalai Lama Lineage through the Himalayan Arts

Dalai Lama is the most recent in the huge line of lraders of Gelug branch of Tibetan Buddhism. He is considered to be an exemplification of Avalokiteshvara or Chenrezig, the Bodhisattva of Compassion, and thus the defender of Tibet. Bodhisattvas are realized beings inspired by a wish to realize Buddhahood for the advantage of all sentient beings, who have vowed to be reborn within the planet to help humanity.

In 1578 the Mongol ruler Altan Khan gave the title Dalai Lama to Sonyam Gyatso, third during a line of reborn lamas of the Gelug school of Lamaism. The title means “ocean of wisdom. And this was given occurring to Sonyam Gyatso’s two antecedents. In 1642, the 5th Dalai Lama, Lobsang Gyatso, became the spiritual and politician of all of Tibet, an authority passed on to his successors. Since that point the succession of Dalai Lamas has been at the middle of both Lamaism and therefore the history of the Tibetan people

His Holiness the Dalai Lama is known as Buddhism’s preeminent spiritual master and teacher, embodying absolutely the best aspirations of this rich tradition that’s quite 2,500 years old. With both profundity and ease, he has carried the nuanced teachings of Buddha to the far corners of the earth, and within the tactic has touched and transformed many lives. a touch like Buddha himself, the Dalai Lama, alongside his ever-smiling face, reaches bent people in ways during which attach with their individual mental dispositions, abilities, and everyday realities.

In this blog we’ll get to know all Dalai lamas:

Gendun Drupa, is the First Dalai Lama was born into a nomadic family. He was born in the year 1391 and died in 1474 AD. His indigenous name was Pema Dorjee.

In 1411, he took novice monk’s vows at the Narthang monastery and obtained full monk’s ordination. In 1416 he became the founder of Gelugpa School, became a disciple, and became a principal disciple of Tsongkhapa’s.

According to legends, Gendun Drupa was a person of enormous scholarships, wrote more than eight voluminous books on Buddha’s teachings and philosophy according to his insights.

He was not called “Dalai Lama “as the title didn’t exist back then. After several years from his death, he was declared the Dalai lama.

The second Dalai Lama, Gedun Gyatso was born into a farming family. He was born in the year 1475 and died in the year 1542. His indigenous name was Gedun Gyaro but his father named him Sange Phel.

When Gendun Drupa was 11 years old, he was known as the incarnation of Gedun Drupa and was enthroned at the Tashi Lhunpo monastery.
His father was a well-known tantric practitioner who belongs to the Nyingmapa sect. It is said that he received his primary education from his father.

In 1486, Gendun Gyatso took his newcomer vows from Panchen Lungrig Gyatso and vows from Gelong from Choje Choekyi Gyaltsen. He took his classes/ studied at Tashi Lhunpo and Drepung monasteries. In 1571, he became the abbot of Drepung Monastery and in the same year, he received Monlam Chenmo, in which he presided over the events with monks from The three great monastic Universities of the Gelugpa sect. He became the abbot of Sera Monastery in 1525.

The third Dalai Lama, Sonam Gyatso was born to a very wealthy family near Lhasa. He was born in the year 154 and died in the year 1588. His indigenous name was Ranu Sincho.

When Sonam Gyatso was three years old, he was recognized as the reincarnation of Gendun Gyatso. Then, he was sent to Drepung Monastery in a great procession and was enthroned. To symbolize the renunciation of the world, his hair was cut. He took his newcomer vow from Sonam Dakpa when he was seven years old. When he turned 22, he took his Gelong vows from Bhiksu from Gelek Pasang.

The Fourth Dalai Lama, Yonten Gyatso was born in 1589. His father was a Mongol tribal chief at the time and he was the grandson of Altan Khan. He died in the year 1617 AD.

From the predictions from the state oracles and the auspicious signs during his birth, the abbot of Gaden Monastery recognized him as the reincarnation of Dalai lama. He was recognized as the reborn of Sonam Gyatso when he was a small child. But his parents did not allow him to leave magnolia until he was 12 years old. That is why he got his primary religious education in Mongolia from Tibetan Lamas.

When he was 12 years old, he was escorted to Tibet in 1601 and then he took the newcomers vow. When he was 26 years old, he took the Gelong vows from the Fourth Panchen Lama, Lobsang Choegyal. He then became the abbot of both Drepung and Sera monastery. He died at the age of 27 at Drepung Monastery.

The Fifth Dalai Lama, Lobsang Gyatso was born to a noble family. He was born in the year 1617. His indigenous name was Kunga Nyingpo. He died in the year 1682.

When the Chief attendant of the fourth Dalai Lama, Sonam Choephel heard the skills of the Chong-Gya boy, he visited the kid and showed him some previous books of the previous Dalai Lama, which he once said belonged to him. thanks to the turbulent political situation at the time, Sonam Choephel kept the invention of the Fifth Dalai Lama a secret. After things settled down, the fifth Dalai Lama was taken to the Drepung monastery and was given the name Ngawang Lobsang Gyatso.

IN 1642, Lobsang Gyatso was enthroned, then he became the spiritual and politician of Tibet. he’s remembered because of the Great Fifth within Tibetan history. He established Lhasa because of the capital of Tibet. Also, he appointed a desi or a regent to handle the executive duties of governing.

The sixth Dalai Lama, Tsangyang Gyatso was born in the year 1683 AD. His indigenous name was Sanje Tenzin. He died in the year 1706.
He was only a boy when he was delivered to Nankartse, and educated by teachers appointed by the Desi Sangya Gyatso. He was kept hidden until the death of the 5th Dalai Lama in 1697. He was then finally announced as Tsangyang Gyatso then enthroned. He is remembered for forsaking of paying time in taverns and ladies and monastic life. He has composed songs and poems.

A Successor of Gushi Khan, Lhasang Khan killed Sangya Gyatso in 1701. In 1706, Lhasang Khan captured Tsangyang Gyatso and declared that the other Lama was the important Dalai Lama. He also died in Lhasang Khan’s Custody.

The seventh Dalai Lama, Kelzang Gyatso was born in 1708. The state oracles of Lithang predicted his birth and he was known as the reincarnation of the Late Dalai lama. He died in the year 1757.

Kelzang Gyatso’s identification as 7th Dalai Lama was kept secret for a time. As there was a very turbulent political situation at the time, he could not be escorted so, he was taken to Kumbum Monastery and was inducted by Ngawang Lobsang Tenpai Gyaltsen.

He was enthroned within the Potala Palace and he took the newcomer vow from Panchen Lobsang Yesi, and he was given the name Kelsang Gyatso in 1720. He took the Gelong vows from Panchen Rinpoche in 1726. He looked for the tutor of Panchen LobsanG Yesi, the abbot of Gyumey monastery, and the abbot of Shalu monastery Ngawang Yonten. He became a master in both the sutra and tantra.

At the age of 43, he constituted the ‘Kashag and then put an end to the post of Desi. He became the spiritual and politician of Tibet. He established Tse-Scholl in Potola Palace and built a new palace. He was also a great scholar and wrote many books, mostly on the tantra. He was also a great poet.

The eighth Dalai Lama, Jamphel Gyatso was born in 1758. It is said he brought so much luck within his birth. He died in the year 1804.

When he was a child, he said he would go to Lhasa at the age of three. After this, the whole of Tibet was convinced that he was the Eighth Dalai Lama. The chief attendant of the Seventh Dalai Lama, Darkpya Thaye came to Lhasa with many Lamas and Tibetan Government officials and then took the boy to Tashi Lhunpo monastery in Shingatse. Then they performed the religious ceremony and the boy was given the name Jamphel Gyatso by Panchen Lama.

The boy was escorted to Lhasa and then enthroned to Potala palace in 1762. When he was seven years old, he took his newcomer vows of monkhood from Panchen Lama. He was then fully ordained in 1777. He established the most popular Norbulingka Park and Summer Palace on the outskirts of Lhasa.

The Ninth Dalai Lama, Lungtok Gyatso was born within the year 1805, in a small village in Kham to Tenzin Choekyong and Dhondup Dolma. He died before his 10th birthday due to complications from the common cold. He died in the year 1815.

He was recognized as the reincarnation of the Eighth Dalai lama. He was the escort to Lhasa and in 1810 he was enthroned at Potala Palace. He took his newcomer vow from Panchen Lama.

He was recognized and enthroned at the Potala Palace in 1822. He took his newcomer vow of monkhood from Panchen Lama, who gave him the name Tsultrim Gyatso. He was enrolled in Drepung Monastery at the age of 10 years, where he studied many philosophical texts and mastered both sutra and tantra. In 1831, when he was 19 years old he took the Gelong vows from Panchen Lama.

The Eleventh Dalai Lama, Khedrup Gyatso was born in the year 1838. He died in the year 1856 in the Potala Palace.
He was recognized as the new Dalai Lama and Panchen Lama, Tenpai Nyipa cut his hair and gave him the mane Khedrup Gyatso. He was enthroned in the Potala Palace at the age of eleven. He took his newcomer vows of monkhood from the Pancham Lama. Although he was very young, he assumed the responsibility of Tibetan spiritual and politician at the request of Tibetan people.

The Twelfth Dalai Lama, Trinley Gyatso was born in the year 1856.

When he was just 2 years old, in 1858 he was escorted to Lhasa where Reting Ngawang Yeshi Tsultrim Gyaltsen, the regent gave him the name Thupten Gyatso. At the age of five, he took the newcomer vows of monkhood from the Gaden Throne Holder Lobsang Khenrab. He was then enthroned in the Potala Palace. He took full responsibility as both the spiritual and political leader of Tibet. He died at the age of 20on Potala palace.

The thirteenth Dalai Lama, Thubten Gyatso was born in the year 1876. He is recalled as the Great Thirteenth. He died at the year 1933.

He was recognized as the reincarnation of the 12th Dalai lama by following the predictions of State Oracle Nechung and also because of the auspicious sighs at his birthplace. Then, he was sent to Lhasa.

The Eighth Panchen Lama, Tenpai Wangchuk, performed the hair-cutting ceremony and gave him the name Ngawang Lobsang Thupten Gyatso Jigdral Chokley Namgyal in 1877. He was enthroned because of the Grand Reception Hall at the Potala Palace. In the same year, he received Upasaka, vows from the Regent Tatsak Rinpoche, Ngawang Palden Yeshi.

When China invaded Tibet in 1910, he fled to India. In 1912, the Qing dynasty collapsed, and then the Chinese were expelled. Then in 1913, he declared Tibet’s independence from China. The thirteenth Dalai Lama, worked to modernize Tibet, although he didn’t accomplish as much as he hoped.

His Holiness the 14th Dalai Lama, Tenzin Gyatso, describes himself as a simple Buddhist monk. He is the spiritual leader of Tibet. He was born on 6 July 1935, to a farming family, in a small hamlet located in Taktser, Amdo, northeastern Tibet. At the age of two, the child, then named Lhamo Dhondup, was recognized as the reincarnation of the previous 13th Dalai Lama, Thubten Gyatso.