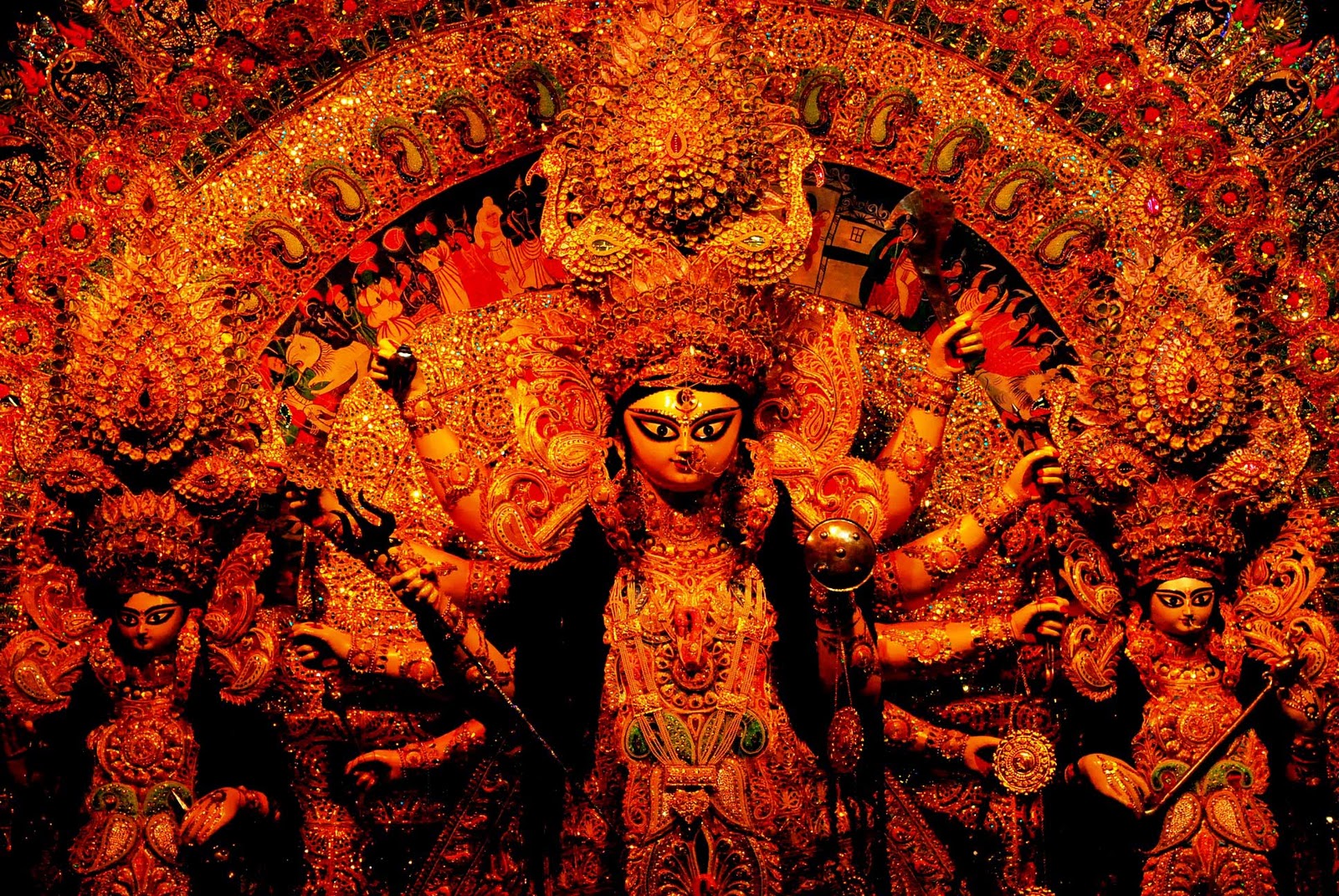 Durga is the original manifested form of Mother Parvati or Adi-Parashakti. The meaning of Durga is  “the inaccessible” or “the invincible”, is the most popular incarnation of Devi and one of the main forms of the Goddess Shakti in the Hindu pantheon. Parvati took the form of Durga to kill the demon Durgamasur.

In Nepal, Goddess Durga is worshiped during Dashain festival. Durga is worshipped in ten forms with one form for each day in Nepal and celebrated across the country with Vijayadashami being a national holiday. The festival includes animal sacrifice in some communities.

Traditionally, the festival is celebrated over 15 days, the first nine-day are spent by the faithful by remembering Durga and her ideas, the tenth day marks Durga’s victory over Mahishasura, and the last five days celebrate the victory of good over evil.

During the first nine days, nine aspects of Durga known as Navadurga are meditated upon, one by one during the nine-day festival by devout Shakti worshippers.

She received features from each and every god. Her face from Shiva, her ten arms from lord Vishnu, her feet from Lord Brahma and so on.

In Sri Lanka, Durga in the form of Vaishnavi, bearing Vishnu’s iconographic symbolism is celebrated. This tradition has been continued by Sri Lankan diaspora. In Japanese Buddhism, she appears as Butsu-mo.

In Hindu mythology, Mahishasura is Buffalo Demon. Mahishasura is known for deception and who pursued his evil ways by shape shifting into different forms. Mahishasura had gained the gift that no man could kill him.

In the battles between the gods and the demons, the Devas led by Indra were defeated by Mahishasura. Dejected by their defeat, the Devas assemble in the mountains where their combined divine energies coalesce into goddess Durga. The newborn Durga led a battle against Mahishasura, riding a lion, and killed him, thereafter she is remembered in this form as Mahishasuramardini.

She has nine other manifestations commonly known as :

She has 8 arms. In Hinduism, these 8 arms represent the 8 quadrants or directions and it is believed that she protects her devotees from all directions. The 8 arms correspondingly directs in the direction of north, south, east, west, and the four diagonals of northwest, northeast, southwest, and southeast.

Durga is Adi-Parashakti herself.  The Devi Gita, declares her to be the greatest Goddess. Thus, she is considered the supreme goddess and primary deity in Shaktism, occupying a place similar to Lord Krishna in Vaishnavism. According to Skanda Purana, the goddess Parvati accounted the name “Durga” after she killed the demon Mahishasura. She is considered as the mother of the universe.

As she is another half of Shiva. She’s presented as “Shakti”, or the female principle of divine energy, but she assumes the power of male gods to save the universe. She’s depicted as riding a lion, which symbolizes unlimited power. Durga riding a lion indicates that she possesses unlimited power and uses it to protect virtue and destroy evil.

Durga is known as triyambake because she has  3 eyes which represent Agni, Surya, and Chandra. Goddess Durga is the symbol of supreme woman power or Nari shakthi. She represents everything the ideal women should be. Bold, courageous and fights against evil. In all her different forms, Durga vanquished demons plaguing the universe.

The weapons in the hands of Durga such as a mace, sword, disc, and arrow, convey the idea that one weapon cannot destroy all different kinds of enemies. Different weapons must be used to fight enemies depending upon the circumstances.

The basic notion of Durga is to lead us from darkness unto light. The darkness can be ignorance, violence or any other ill fate. Of course Durga can’t be physically present for all of us. But she has a strong mental presence; she empowers one to fight against evil with courage and confidence. Much like a modern day superhero.

Different Durga Mantra and their Use

Mantra is a sound, word, or phrase that is repeated by someone who is praying or meditating. The Sanskrit word mantra consists of the root, ‘man’- “to think” and the suffix -tra, designating tools or instruments, hence a literal translation would be “instrument of thought”.

The earliest mantras were composed in Vedic Sanskrit by Hindus in India, and are at least 3000 years old. Mantras now exist in various schools of Hinduism, Buddhism, Jainism, and Sikhism.

Mantras of sri Druga Saptashati is the Mantra for welfare.

This Mantra helps one in attaining all types of Siddhis.

This is a very popular Mantra of Goddess. Performing this Mantra is essential in ceremonies of Goddess. By reciting this Mantra one gets intelligence, beauty, and prosperity. It helps in the realization of self. Om regulates our Chakras to best possible alignment for good energy flow in our Prana or Life forces

Gauri mantra is for getting a suitable husband.

This mantra is for getting reach and prosperity.

The mantra of Attraction helps you to attract what you want into your life. Om regulates our Chakras to best possible alignment for good energy flow in our Prana or Life forces.

Mantra for getting salvation

Mantra for the destruction of sins

Mantra for getting suitable wife

Mantra for the destruction of a pandemic

Mantra for good health and fortune

Mantra for getting Shakti