Shading, Colouring and Grading of Thangkas and Mandalas 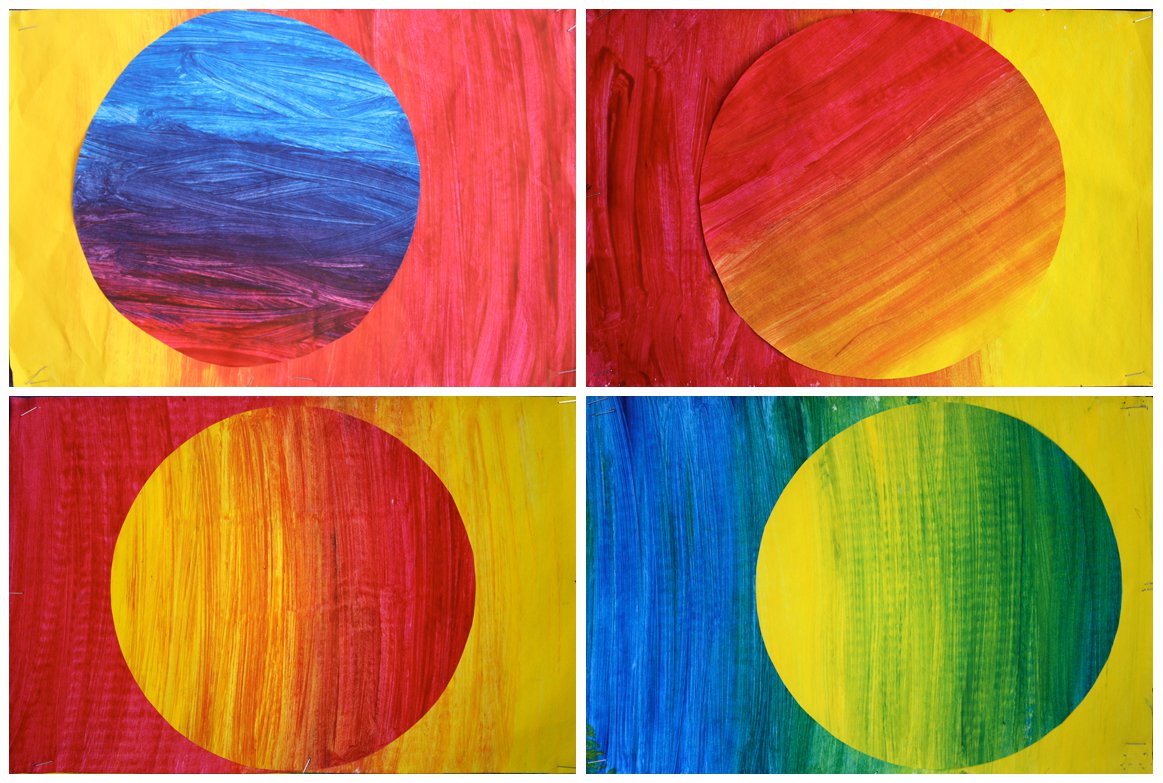 Shading, Colouring and Grading of Thangkas and Mandalas

Another main step is to apply washes for shading and gradual transitions of tone. Shading is called Dang in Tibetan which is one of the special feature of Thangka painting.

Shading is an important feature of thanka painting, taking up a large portion of the time, and is done very carefully and precisely.

Shading in this context does not mean the treatment of light and shadow within the whole composition, for the distribution of light and dark is not systematically developed throughout a thangka painting.

Nevertheless, Tibetan artists did practice shading in a different sense. Transitions of both tone and colour are regularly executed on single objects within the painting, and when used to create shadowing, the technique contributed a three-dimensional appearance to such things as clouds and the bodily forms of the divine beings.

Especially when employed in the modeling of faces and bodies, shading lent a realism where it is needed most: on the sacred figures at the center of the icon.

The painters of Tibet used several techniques for shading and colour gradations, but most of them can be typed as wet and dry.

Wet shading is the blending of two wet colours on the painting surface, is employed for the most part only during the laying on of the initial coats of colour. Wet shading, usually required more than one brush. The colour at each end of the gradation needed its own brush, and often a third is used for the intermediate hue.

Dry shading is a secondary step. It consisted of the application of successive thin washes of colour over a dry preliminary coat.

Dry shading, conversely, is executed with only one brush, although this in no way prevented the artist from achieving a variety of shading effects by altering the size, shape, direction and frequency of the brush strokes.

Byug mdangs is another step used in dry shading method.

According to the artist 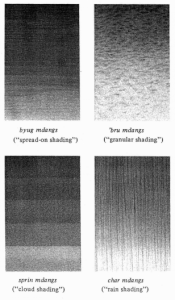 this method is most appropriate for shading the skies in paintings that depicted peaceful  deities.

Shading with small dabs or dots of indigo, applied thickly and close together at the zenith, but less frequently as the horizon is approached.

A less time consuming method, this is used for the skies of paintings of either peaceful or aggressive (khro bo) deities. This is aslo known as dot shading.

Shading laid down in horizontal bands in imitation of cloud layers. This shading is used to crest clouds in the thangkas background.

Indigo shading applied in vertical strokes, giving the appearance of a falling shower. This is to be used especially in paintings of aggressive, terrifying deities.

Thus, even in the relatively simple matter of tinting the sky the artists had a considerable range of techniques available to them.

However, that the last two of the above shading types are not commonly employed by Central Tibetan artists in the painting of thangkas.

Granular shading is called as gtsag mdangs in Tibetan and also known as poked shading or dotted shading.

Diluting the Dye with Water

Another possibility open is to combine the application of dry-shading dyes with diluting strokes of water.

Some painters preferres this technique particularly for the shading of small areas.

We can add another dimension to shading by combining the dry-shading and dilution-shading effects with the different types of undercoats. Such combinations allow the classification of shading into at least three further types:

Finally, we should also mention two further elaborations of shading technique. The first of these is the shading of an area where the application of the dye is preceded by the drawing of an intermediate sketch on the undercoat.

In most cases intermediate sketching is not essential because the artist could either see the preliminary drawing through the undercoat, or could mentally reconstruct the sketch by referring to the outer form of the object. The second special shading technique is a variety of dry shading applied to bodily figures to give them the appearance of fullness.

The technique consisted of the application of bands of dark dye to model the flesh. This could be called “contouring” because the artist mainly applied these bands around the borders of anatomical areas. The technique is especially important in the shading of dark colored deities.

The Dyes Used in Shading

For shading and outlining, few mineral pigments are used. Instead, the main shading colours are organic dyes and lakes, and of these the two most important are indigo and lac dye.

indigo is called rams in Tibetan which is the dark blue dyestuff. 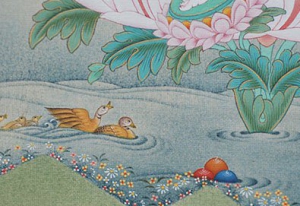 At the turn of the century, however, a comparatively cheap synthetic indigo is developed. This caused severe economic disruption.

Business of Indigo in India, Nepal and Tibet

Tibetans imports their indigo in slabs or chunks of prepared dye from India and Nepal. Several qualities are available. Good qualities are light in weight and easy to break.

The best grades could be identified by the fact that the new surfaces of freshly broken indigo would reflect light with a reddish tint.

How to check quality of Indigo?

Tests could be made to gauge the quality of indigo. If a little good quality indigois moistened and rubbed between the fingers, it dyed them a dark blue-black that could not be washed off easily.

Another test is to scratch a piece across the thumbnail. If the indigo left a black streak it is of good quality.

Although it is unsuitable for dark outlining it is good for making washes for the fine shading of such things as clouds and flowers.

What are the Steps to Prepare Indigo?

For preparing indigo in a consistency suitable for painting the most important thing is to grind it well. Prolonged grinding not only produced a smooth, ink-like consistency, but is also said to improve the colour because the longer the dye is ground the darker its blue became.

Strictly speaking, indigo did not require any hide glue as a binder. The addition of a little glue, however, is said to facilitate the grinding process. Also, when it had been thoroughly ground its quality as a paint is improved by the presence of a little glue. This is because indigo in solution with water tended to coagulate in the paint pot as it dried out, but this drying process is slowed down and the indigo is held in aqueous suspension longer if mixed with a little glue.

Being a dye, indigo is well suited for both shading and outlining. In almost every instance where it appears that ink has been employed for either purpose in traditional thangkas, in fact it is indigo that has been used.

Indigo is superior to ink because it is less prone to running and streaking if water is spilled on it.

Many Thangka painter use only one kind of Indigo but if it’s possible the best is to prepare two different tones of Indigo. In any case, we should choose carefully because the tone of this color could change the impression of the Thangka entirely. 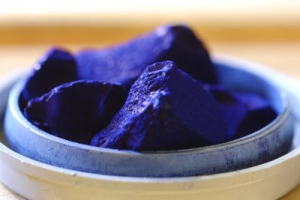 This is the type of  synthetic indigo which is widely used in Nepal.

The shade of this synthetic indigo is much more clear and bright compare to natural indigo and it cause the thangka look, flashy, or lack of depth. 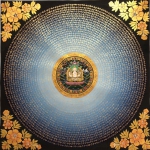 Chenrezig is called as Avalokitesvara in Tibetan Buddhism. He is the god of Compassion. At the center of the mandala is Avalokiteshvara, peaceful in appearance, surrounded by OM Mani Padme Hum mantra.
Buy Chenrezig Mandala Online