Top 45 Heart Advice – The Tree of Wisdom by Nagarjuna 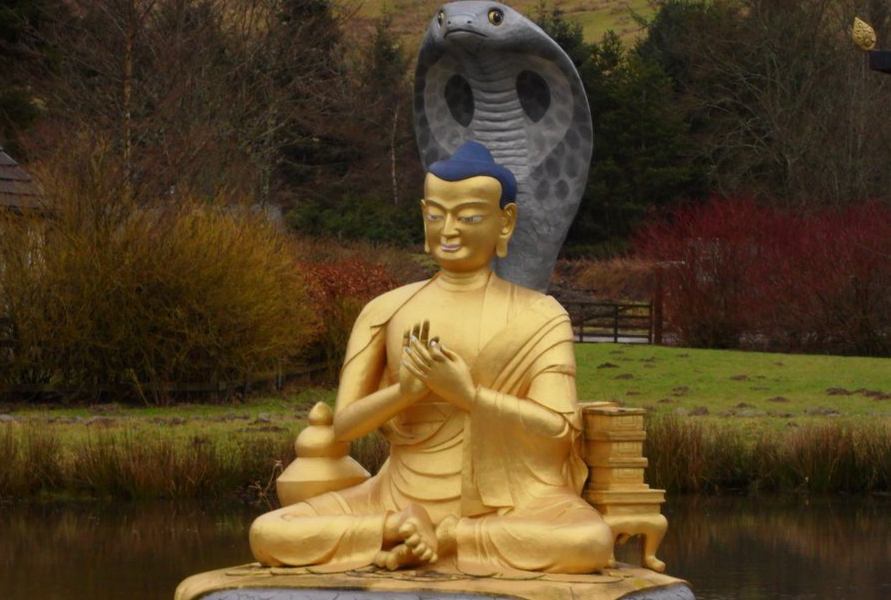 Top 45 Heart Advice – The Tree of Wisdom by Nagarjuna

Buddhists consider Nagarjuna to be a “Second Buddha.” His development of the doctrine of sunyata, or emptiness, was a significant milestone in Buddhist history. However, little is known about his life.

It is believed Nagarjuna was born into a Brahmin family in south India, possibly in the latter part of the 2nd century, and he was ordained as a monk in his youth.

Most of the other details of his life have been lost in the fog of time and myth.

Nagarjuna chiefly is remembered as the founder of the Madhyamika school of Buddhist philosophy. Of the many written works attributed to him, scholars believe only a few are authentic works of Nagarjuna. Of these, the best known is the Mulamadhyamakakarika, “Fundamental Verses on the Middle Way.”

The Tree of Wisdom by Nagarjuna

Vajrasattva, ‘Immutable Being’ and ‘Consciousness’, presides over Great Happiness, and has vast esoteric significance in the Mahayana. Vajrasattva symbolizes the Dharma‐Kaya, also called Perfect Buddhahood.

A sexual consort and love‐goddess, the succoring, pious Tara (here Visvatara) are “She of the Buddha Eye’ ‐ a third eye ‐ in Tibetan. Tara represents Wisdom of Yoga, Saving Mercy, and the hidden might called Kundalini.

Su Nü teaches in the Jade Chamber’s Secrets that when she who had once been a virgin press with her feet and opens the jade gate wide, subject to no violence, she enjoys him greatly. And there is more to learn still. For example, people in other cultures and times were not ashamed of doing such things when their fathers and elder brothers were watching, writes the Chinese Taoist Chen Luan in AD 570.

One thing leads to another; it is suggested that since proper practice tends to improve one’s performance, wisdom may be had by impressive joys. But these things are put aside below. What follows are fruits of wisdom, however hard‐won: She‐rab Dong‐bu (The Tree of Wisdom), is a quite simple ethical treatise by Nagarjuna (Tibetan: Lu‐trub], who flourished about 100 BC, and is celebrated as a magnificent Buddhist philosopher.

Evil persons should be brought under control

Evil persons should be brought under control. The wise should be referenced. Fill your treasury with honest deeds (And) protect your own countrymen.

Your own secrets and those of others

(As regards) your own secrets and those of others, If you guard these as your own dear child. He for whom all earthly things are equal Will make love for man the principal affection.

If your wife is evil and your friend evil

Avoid that friend who is greedy for wealth

Avoid that friend who is greedy for wealth. Avoid a wife who is fond of fornication. If unskilful in curing and hard to please (or respect) Avoid such a doctor.

Although you know the difference between good and bad deeds

Although you know the difference between good and bad deeds You should carry out your work after consultation. Although you may only succeed partially Even without succeeding you are to be admired.

The steadfast who speak in few words and politely

The steadfast who speak in few words and politely Are very much respected by mankind. As the sun which coming out from the shadow By his rays creates great heat.

These doctrines, though you may suffer

(As regards) these doctrines, though you may suffer (Yet) be not anxious in your mind. When the moon has been eclipsed will it does not shine again?

Just as for the garlands on the altars

Just as for the garlands on the altars Only full‐blown flowers are gathered, So a gardener, in the same way, Does not uproot the plant.

Rewards and royal favors, The price of prostitution and praise (from pupil), The hire of a boat and the rent of a dwelling, These may be asked for at once For these six are not to be had after a long interval.

A magic spell misunderstood is poison

A magic spell misunderstood is poison. Indifference to illness is poison. An old man keeping company with the woman is poison. A poor man’s sleep in the daytime is poison

Worthy men who do not make any promises

Worthy men who do not make any promises, But if a promise is made under pressure Then it is like a carving on stone. Even should they die it is not altered?

You will come to terms with your enemy on occasion

You will come to terms with your enemy on occasion And on occasion, you will quarrel with your friends. Having learned to distinguish what should be done and what not, The clever man will always select his opportunity.

If you sin in speech you will be damned

If you sin in speech you will be damned. The parrot, the singing bird, and the waterhen, The silent water duck which man does not catch— Their entire accomplishment is keeping silence.

Keep your resolves to yourself as a secret

Keep your resolves to yourself as a secret, Like a body which lies (hid) in the mud. If it were not that the sprouts attract attention Who would find the lotus root?

Although it may become perceptible

Although it may become perceptible still a non‐existent substance (reality) will not be mentioned. How could the peacock in the painting eat the jewels?

This refers to the story of a man who was threading pearls in a room on the wall of which there was a painting of a peacock. The peacock came out of the picture and swallowed the pearls but no one would believe his story (D.S.).

If anyone plans in his mind to do evil

If anyone plans in his mind to do evil. He always uses pleasant words to the other. When the hunter sees the game to be killed. He sings a sweet song to please it.

Whatever your thought (or opinion) may be. It should be clearly impressed on all men’s minds. They are thus brought under your control, As by the wish‐granting gem.

It is easy to live by carrying loads of others

It is easy to live by carrying loads of others. It is easy to dress in tree‐bark in the forest. It is easier for men to die Than to spend their days in quarreling.

The root‐principle of mankind is not to quarrel

He who undertakes work which he cannot carry out

He who undertakes work which he cannot carry out, Who vies with the multitude and disputes with the powerful, Who lets a woman know his thoughts— The four gods of death sit at his door.

Regard not an evil prince

He who can go anywhere

He who can go anywhere Why should he be injured through his attachment to his own native land? The evil man says “it is my own well” And saying thus drinks the brackish water.

A highly learned man Has two (forms of), Felicity. Either he will abandon all earthly interests Or else has much which could be abandoned.

He whose glory has left him

He whose glory has left him (and) Whose efforts have become meaningless When a holy man becomes impoverished (in this way) He is unhappy except in a forest.

The career of a holy man

The career of a holy man is of two kinds. Like a flower waving its head Which is either honored by all in the world Or else disappears alone in the forest.

Life, which perishes naturally in a moment

Life, which perishes naturally in a moment, Has this as its essence. As your actions and intellect are undeveloped Remains modest in society.

An anthill increases by an accumulation

An anthill increases by accumulation. Similarly, eye‐medicine is used up by distribution. The to‐be‐feared grows less by association. That is the thing to understand.

The anthill and honey

The anthill and honey, The waxing moon, up to the full, The possessions of kings and beggars Increase by gradual accumulation.

Do not be excessively covetous

Do not be excessively covetous. Great greed entails punishment. If you are stultified by excessive covetousness You are like the fox that was killed by the bow.

He who always pursues the man

He who always pursues the man who can do something for him And pays no heed to the man who has done something Is like the wicked man whose ear was filled with curds. Such a one has stolen that which was guarded.

Do not go (in search of) excessive fame. Judge honestly for yourself. By the fall of the ‘bel’ fruit into the water See, the forest was deserted.

This refers to a story of Sanskrit origin. The noise caused by the fall of the ‘bel’ fruit frightened the smaller animals who communicated their fear to the larger, thus causing the forest to be deserted.

Do not say things which hurt others feelings

Do not say things which hurt the feelings (of others). Do not speak in a very injurious way. The good man and the armed Enemy become known.

Even if the son of his enemy speaks sweetly

Even if the son of his enemy speaks sweetly The wise man is not indifferent. As a poisonous leaf is extremely potent (irresistible) It will cause injury at any time.

Whosoever does benefit to his enemy

Whosoever does benefit to his enemy With straightforward intention, By so doing all enemies will arrive at The state of folding their hands in devotion.

In desiring to injure your enemy

In desiring to injure your enemy Praise his inherent good qualities. What do evil thoughts of injury do? They injure you and not your enemy.

Be firm with the unruly, not with mildness

Be firm with the unruly, not with mildness But with suitable harshness. If the children are not diligent Does not the beneficent father threaten punishment?

As long as you watch the ‘way’

If you are always seeking your own advantage

If you are always seeking your own advantage What is the use of remaining among the multitude? There exists no means whatever for Making all beings rejoice exceedingly.

To seek from others and yet wish for good food

To seek from others and yet wish for good food, To spend your life in begging and yet have great pride, To be ignorant of literary works and yet wish to dispute,— These three make you ridiculous to others.

The fire which burned the forest

The fire which burned the forest Became the companion of the wind, And that same extinguished the fire. So has the weak man no friends.

Not doing harm to others

Not doing harm to others, Not bowing down to low people, Not abandoning the path of virtue,— These are small (points) but (really) very many.

Having no fear of disease

Having no fear of disease, Endeavoring to associate with the holy, Not using the (vulgar) language of the mean,— A day (spent thus) is greater than a hundred years.

Whenever the mean find a little wealth

Whenever the mean finds a little wealth They despise everybody and are filled with pride. But the virtuous, although they may attain the possession of wealth, Remain bowed like ripe rice.

Low-class creatures, Should they become possessed of wealth or science, Think only of quarreling with everybody Like the fox with the blue skin. 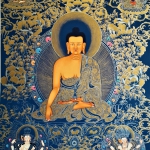