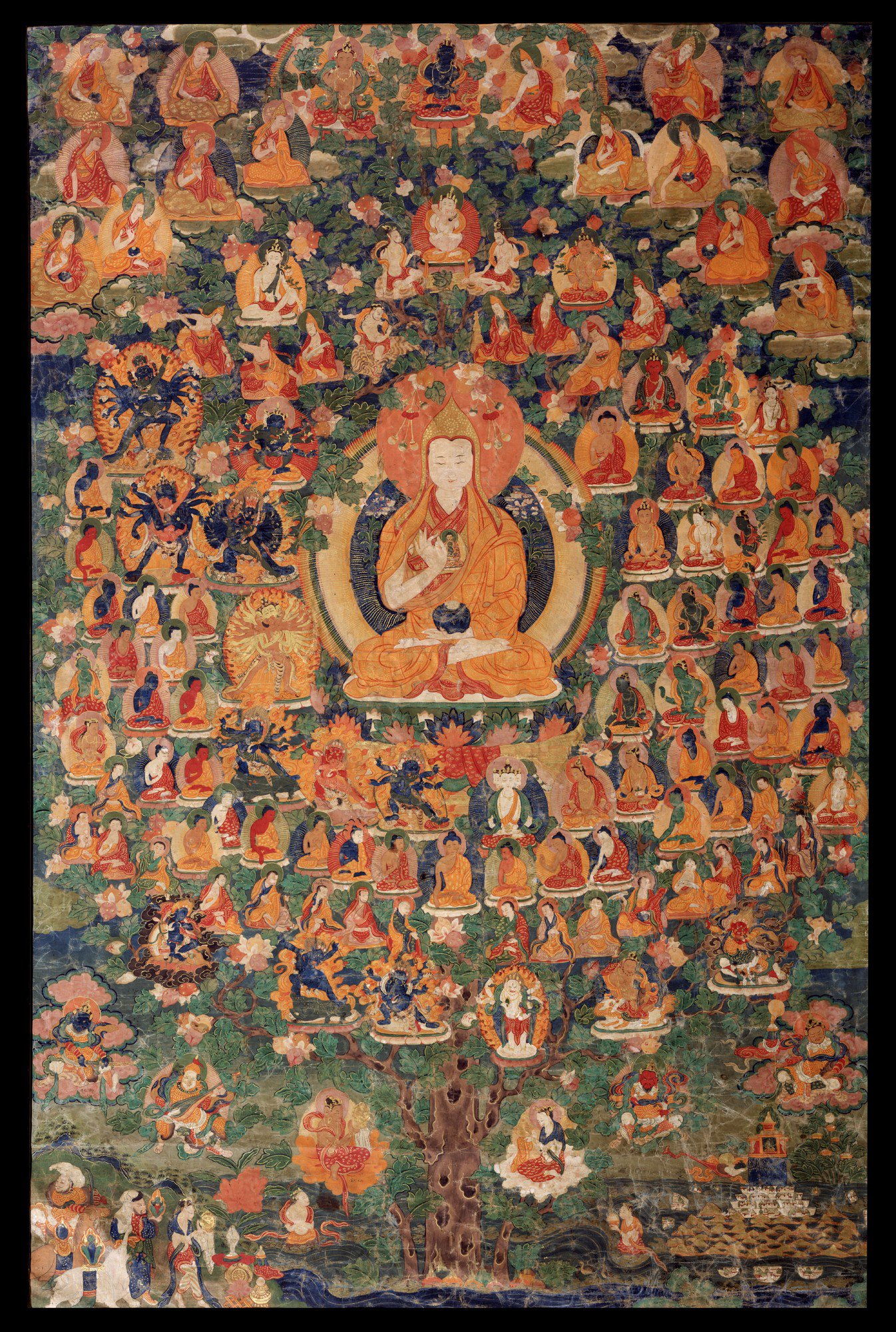 Gelug Lineage’s field for the Accumulation of Merit with Tsongkapa at the Center is surrounded by the Panchen Lama incarnation lineage above and with meditational deities, Confession Buddhas, arhats and protectors below. This thangka is created from a block print image. The multitude of religious figures is presented as if seated in a tree rising from a blue pond below at the bottom of the composition.

The viewer sees it as figures arrayed on one side of a green leafy tree placed from top to bottom. This is an artistic representation. Textually it is described with Tsongkapa at the top of the tree seated on a throne and the array of figures are depicted surrounding him on a horizontal plane rather than the artistic representation of a vertical plane.

The design for this Refuge Field was created by Konchog Gyaltsen during the time of the 3rd Panchen Lama. The thangka was then carved onto a broad and flat length of wood, inked and then used to make cloth and paper woodblock prints. 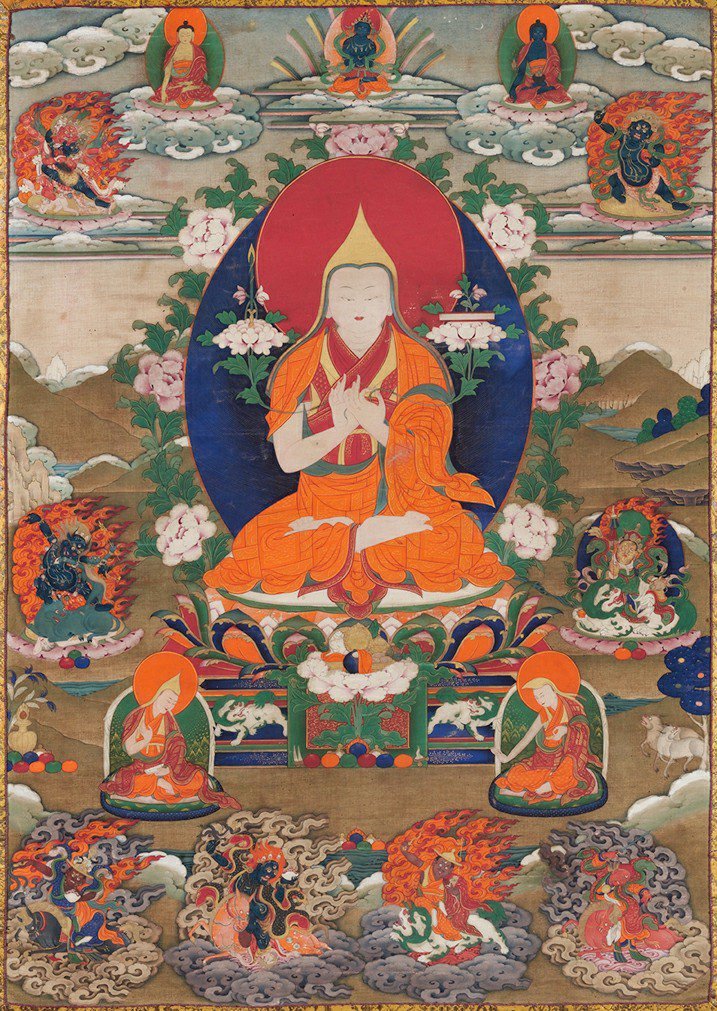 Lama Tsongkapa was the founder of the Gelugpa School with the two principal students Gyaltsab on the left and Khedrup on the right. In the appearance of a monastic scholar with a yellow Pandita hat and the orange patchwork robes of a fully ordained monk. Lama Tsongkapa performs with both hands the gesture of Dharma teaching at the heart while holding the stems of two lotus flowers blossoming at both ears supporting on the right a wisdom sword and at the left a book.

Lama Tsongkapa is with the two legs folded in vajra posture he sits upon a moon disc and multi-colored lotus seat surrounded by a blue nimbus. At the front to the right and left sit the two close disciples of Je Rinpoche, Gyaltsap Dharma Rinchen, and Kedrup Geleg Pal Zangpo. Both wear monastic robes and yellow hats.

From the heart of the Lord of the hundred gods of Tushita on the peak of a cloud bright white like a mound of fresh yogurt Lord of Dharma Omniscient Lobzang Dragpa together with sons please come here. At the top center of the thangka, there is the blue primordial Buddha Vajradhara with Shakyamuni Buddha on his right and blue Medicine Guru Buddha on the left.

Again at the right and left are Very Secret Hayagriva who is red in color with three faces and six hands and blue Vajrapani in his wrathful appearance. On the left side of the thangka, there is Yama Dharmaraja who is blue in color and standing atop a buffalo. At the right of the thangka, there is Vaishravana who is known as the guardian king of the north and riding a lion.

At the bottom of the thangka from the viewers left to right are the special protectors of Sera Monastery: Dorje Ta’og, unidentified, Dorje Shugden, and Karma Shar Chatri Chenchig. 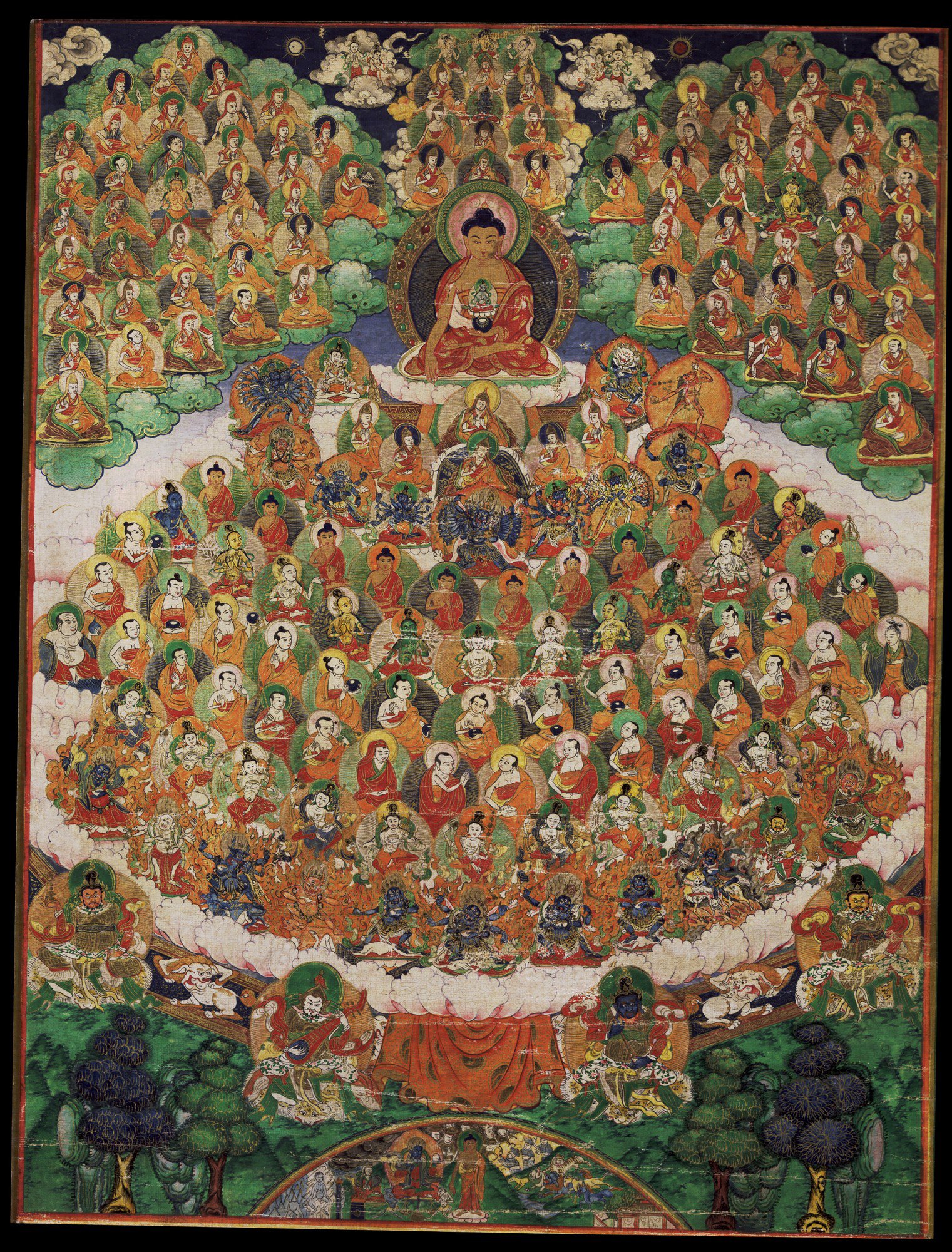 Shakyamuni, Buddha is the Enlightened One of the Shakya Clan. The Gelugpa Field of the Accumulation of Merit with the teachers of the lineage of Maitreya on the upper left. And that of Manjushri on the upper right. Deities, buddhas, and bodhisattvas are placed below along with the Dharma protectors at the bottom. 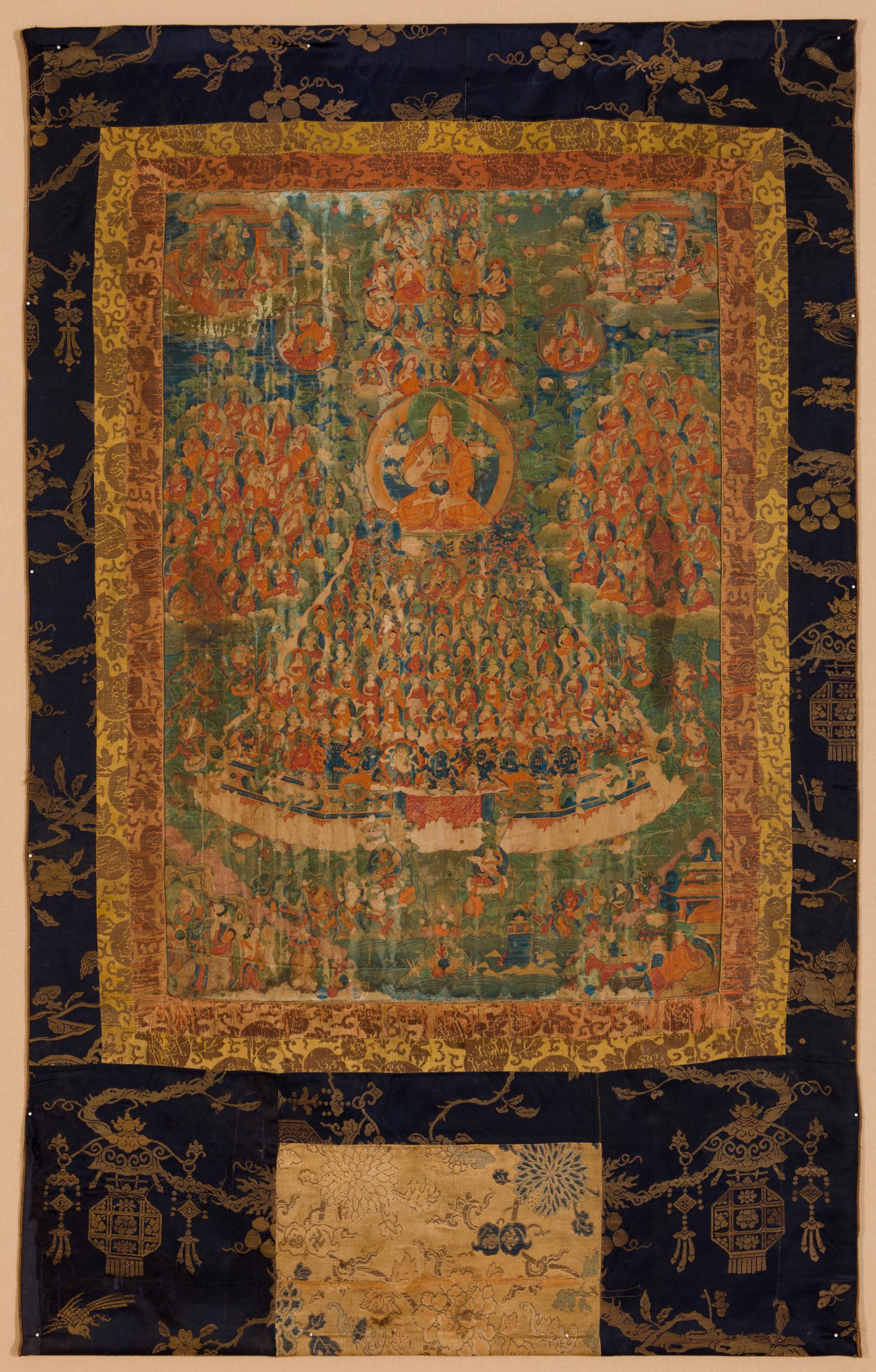 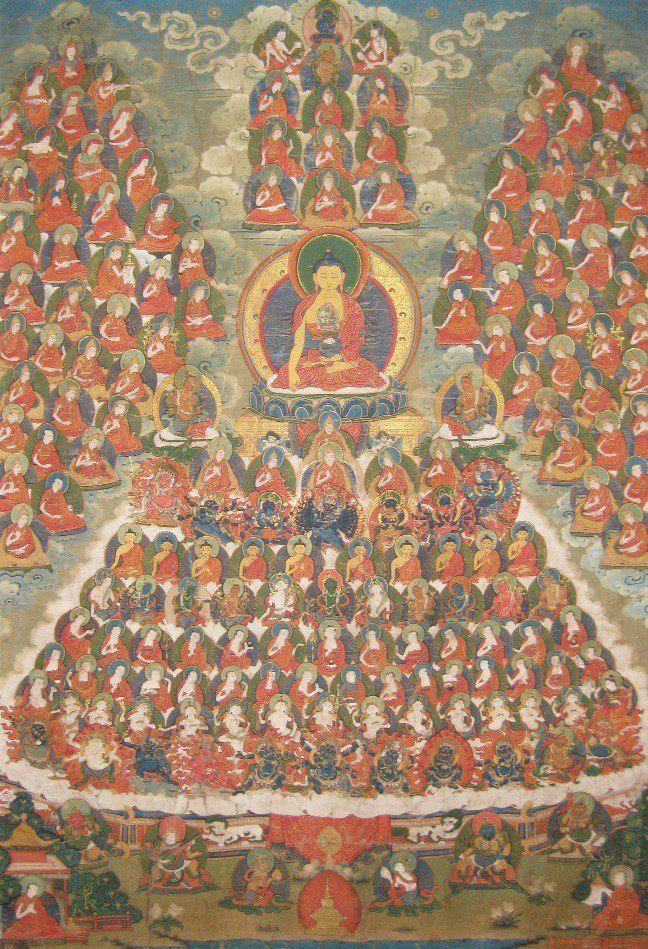 At the center of the thangka, there is Shakyamuni Buddha surrounded by lineage teachers, Indian adepts, meditational deities, protectors, and wealth deities -the Field for the Accumulation of Merit. This thangka and a number of others labeled as Gelug Refuge Field Shakyamuni appear to have been created using a common model or possibly a woodblock print model.

In the Gelug Tradition of Tibetan Buddhism, there are numerous Refuge Field composition types distinguished both by the central figure and also by support Shakyamuni Buddha, (2) Je Tsongkapa,  Pabongka Design, and  Lotus Support, and Block Print. The first three types are depicted at the peak of a wish-fulfilling tree, seated on a throne and lotus. The fourth type is placed only on a lotus blossom.

The two general types of central figures for all types of Refuge Fields are Shakyamuni Buddha and Je Tsongkapa. The variation of the two subject figures depends on the intention, purpose, and function of the thangkas. The former is a Lama Chopa Shakyamuni Refuge Field and the latter a Lamrim Lineage Tsongkapa Refuge Field. The various sections of the refuge field have been numbered according to hierarchy and colored only for purposes of contrast and separation. The descriptions and explanations below follow the numbered hierarchy. 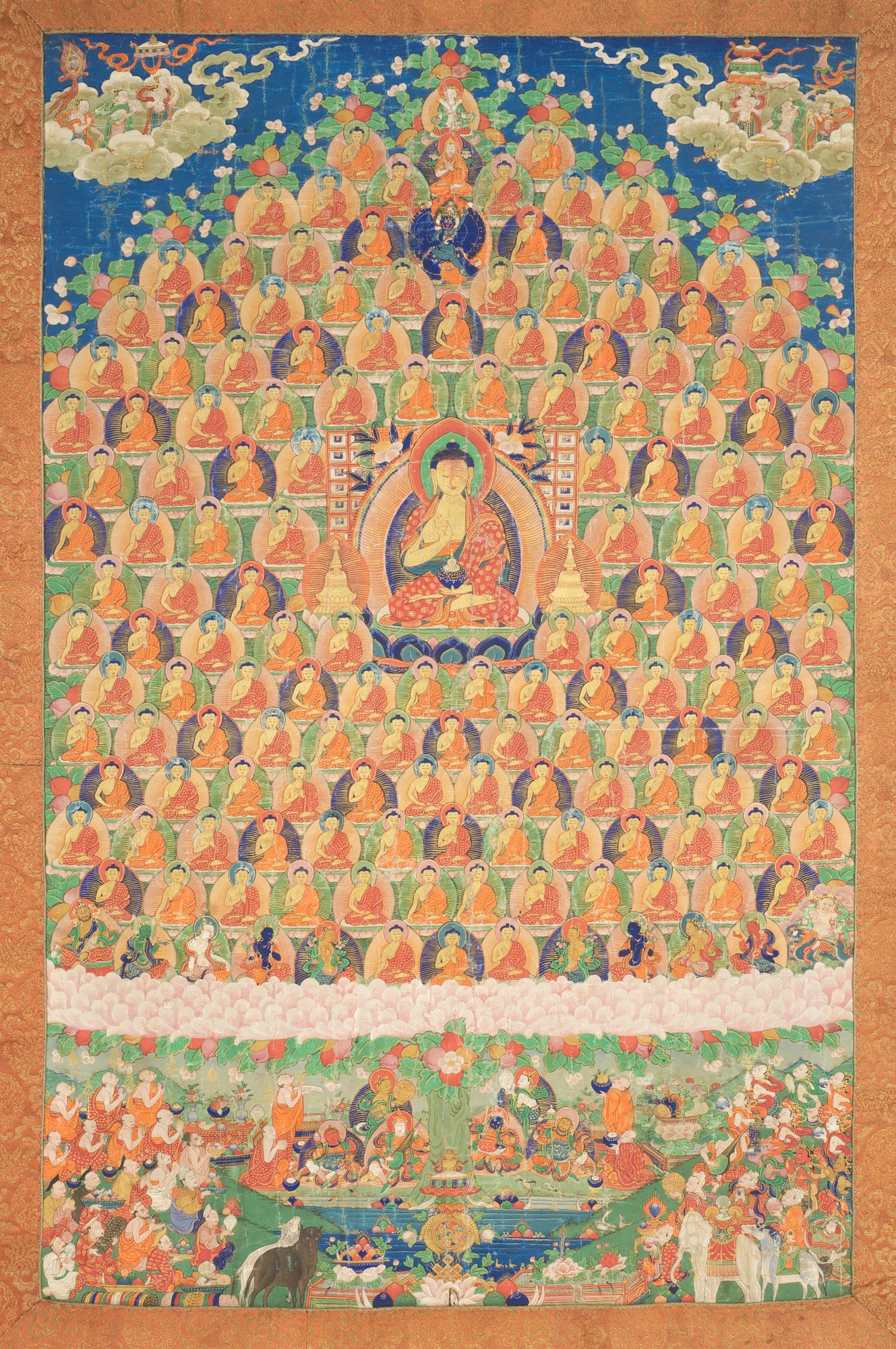 The central Buddha figure is likely to be one of the Seven Earthly  Manushi  Buddhas, and possibly Kanakamuni. At the top center of the thangka, there is the Sambhogakaya Buddha, Vajrasattva with consort who is white in color, with one face and two hands. Below that is the founder of the Gelug Tradition, Tsongkapa, and below that is the meditational deity Vajrabhairava all in a vertical row.

At the top right and left of the thangka, there are three gods/goddesses of the heavens deva/Devi holding auspicious objects such as fans, parasols, conch shells, etc. standing on white billowing clouds. Along with the bottom register of buddhas, above the pink lotus blossom are the Eight Great Bodhisattvas who are with four on the right and four on the left. On the left side of the thangka, there are orange Maitreya, blue Vajrapani, white Avalokiteshvara, and green Kshitigarbha. 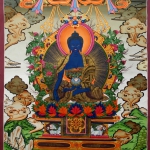