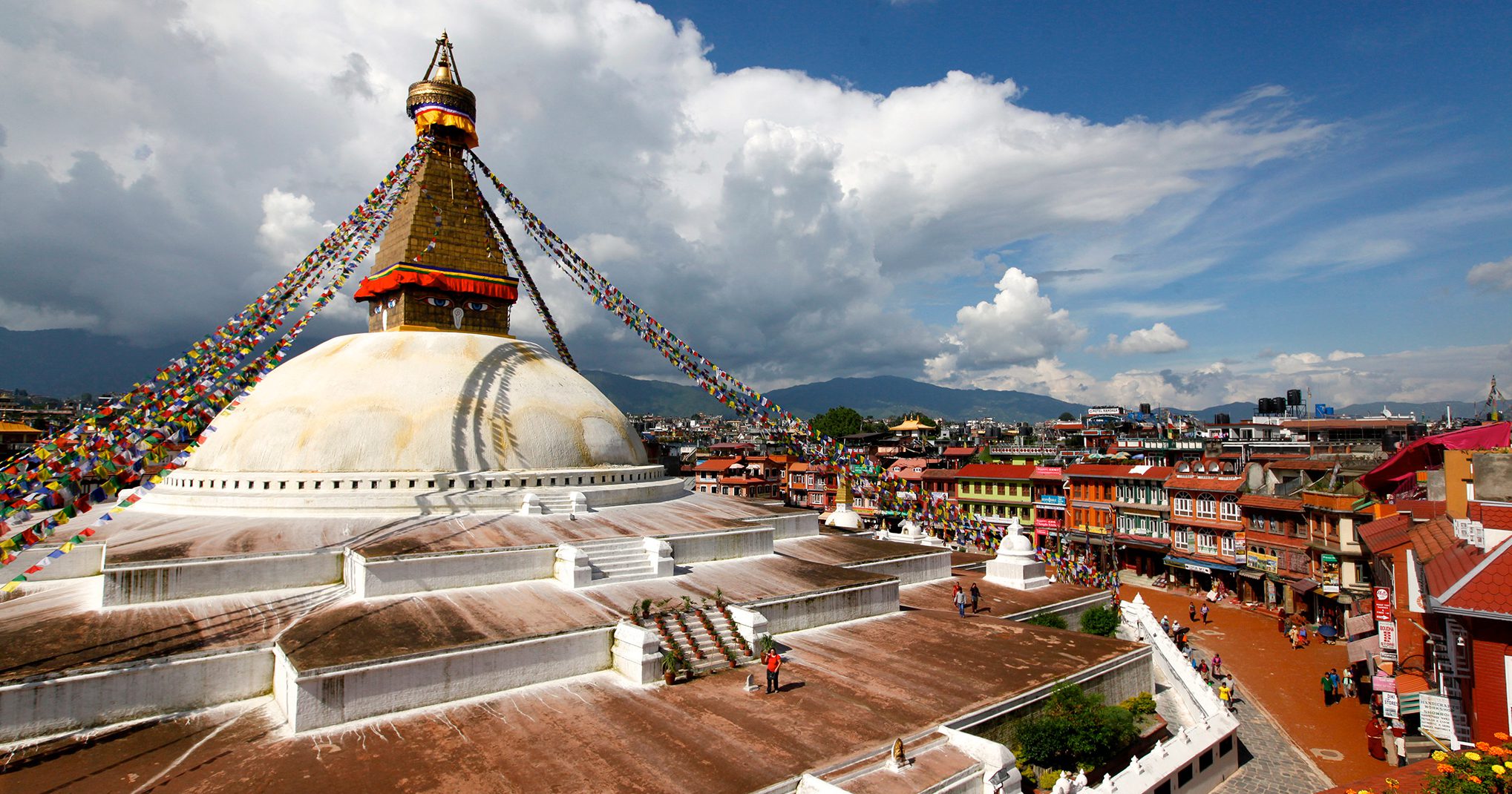 Nepal, a place of eternal beauty, is a land of colorful cultures, ancient history and people, traditional arts, and picturesque scenery. It is popularly known as the highest mountain peak of the world, Mount Everest.

Historically, Nepal has been a kingdom centered in the Kathmandu Valley for more than 1,500 years. During most of that period, the Kathmandu Valley has been Nepal’s political, economic, and cultural hub and was once a sanctuary for waves of migrants from north and south of its borders. Nepal is a landlocked country, sandwiched between two Asian giants– India on three sides and China (Xizang Autonomous Region -Tibet) to the north. Roughly rectangular in shape, it is slightly larger than the state of Arkansas.

For a small country, Nepal has great physical diversity, ranging from the lowland Tarai Plain in the south to central lower mountains and hills constituting the Hill Region, to its majestic Himalayas, which in Sanskrit means ‘the abode of snow’, forming the Mountain Region in the north. From the lowland Tarai belt, landforms rise in successive hill and mountain ranges, with valleys situated between, ultimately reaching the Tibetan Plateau beyond the Inner Himalayas. Five climatic zones based on altitude range from subtropical in the south, to cool summers and severe winters in the north.

Nepali, the native tongue of the Paharis (the indigenous people of the Himalayas) and the national language of Nepal, is spoken by almost 60 percent of the population and is written in Devanagari script. There are more than twelve other languages with numerous dialects, although many are rarely spoken outside ethnic enclaves.

Although the Tarai Region of Nepal is the birthplace of Siddhartha Gautama, the Buddha, Hinduism is the official religion of Nepal. It was around the 12th century when the Nepali rulers’ early patronage of Buddhism largely gave way to Hinduism, reflecting the increased influence of India. Actually, the religion practiced by the majority of Nepalese is a synthesis of Hinduism and Buddhism (as well as indigenous folk belief in the Hinduism of the Pahari) and the practices have intermingled over time.

Kathmandu, the capital city of Nepal, is a treasure trove of ancient art and culture. Its auspicious location along trans-Himalayan trade routes has, for centuries, served as a resting place for traders, travelers, and pilgrims, as the shared sacred site of various Himalayan religions, and as the epicenter of Himalayan art production and influence.

Since the fourth century, the people of the Kathmandu Valley have developed a unique variant of South Asian civilization. A cultural mixing pot, it has bridged cultures and absorbed elements of its neighbors, yet retained a distinctive character. Kathmandu’s unique placement, both geographically and historically, has put it in the remarkable position of encouraging a tremendous amount of cultural and religious exchange, thus establishing a living creative tradition that is one of the most important influences in Himalayan art.

One of the results of this extraordinary situation has been skilled artisans of the thangka tradition settling and thriving in the Kathmandu Valley. These days most Tibetan thangkas sold in Tibet are actually painted in Nepal.

Religion occupies an integral position in Nepalese life and society. Although Nepal is officially a Hindu state, there is actually a great deal of intermingling of Hindu and Buddhist beliefs and practices. One of the main reasons that there have been no overt religious conflicts has to do with the sharing of worship sites: Hindus worship at Buddhist temples and Buddhists worship at Hindu temples. Generally, the differences in practice between Hindus and Buddhists have been very subtle. Other religions, including Muslim and Christianity, are practiced by a smaller part of the population.

Hinduism is polytheistic. It incorporates many gods and goddesses with different functions and powers; but in the most important and widely held doctrine, gods and goddesses are considered merely different manifestations or aspects of a single underlying divinity. This single divinity is expressed as a Hindu triad comprising the religion’s three major gods: Brahma, Vishnu, and Shiva personifying creation, preservation, and destruction, respectively. Vishnu and Shiva, or some of their numerous avatars (incarnations), are most widely followed.

Buddhism had its origin in the teachings of Siddhartha Gautama. He was born in Lumbini, in the central Tarai Region of Nepal, about 563 B.C. Born a Hindu and educated in the Hindu tradition, Siddhartha Gautama renounced worldly life at about the age of twenty-nine and spent the next six years in meditation. At the end of this time, he attained enlightenment and was known after that as the Buddha, or the Enlightened One. He devoted the rest of his life to preaching his doctrine, that of following the Middle Way. Shamanism, prevalent throughout Nepal, is not a religion yet works with the different religions practiced.

The Newars are typical of the synthesis of peoples and cultures in the Kathmandu Valley. Although this fertile valley, which includes the towns of Kathmandu, Bhaktapur, Lalitpur, and Kirtipur, is their original home, they can now be found scattered in the main towns throughout Nepal.

An indigenous ethnic group of Mongolian-Tibetan ancestry, the Newari are responsible for the fascinating wealth of houses, palaces, and works of art, which attract so many visitors to Nepal. Part of the genius of Newar artisans lies in the long-established patronage by the ruling nobility as seen in temples, palaces, monasteries, and courtyards. Nepali art and architecture that decorates Kathmandu can be credited to Newari artists.

As stated in Insight Guides Nepal, “The valley’s tremendous artistic wealth was created by its original inhabitants, the Newars, who drew on the cross-cultural influences brought in by successive waves of traders, pilgrims, religious scholars, and refugees.” Newar life clearly blends spirituality and worldly existence, as evidenced in their art.