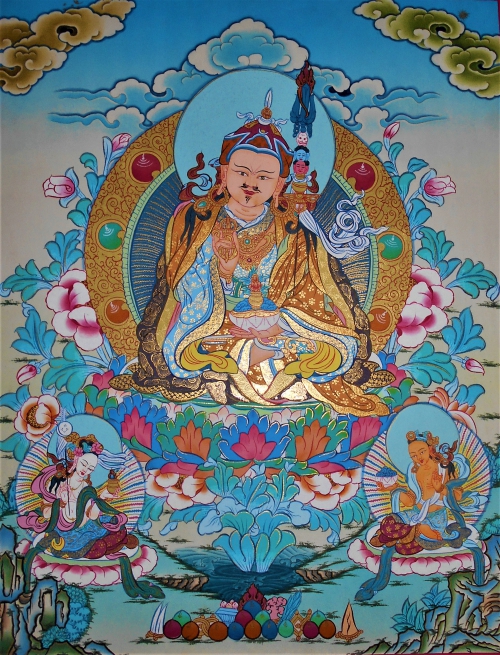 Padmasambhava “Lotus-Born”, also known as the Second Buddha, was a sage guru from Oddiyana, northwestern Classical India (in the modern-day Swat Valley of Khyber Pakhtunkhwa, Pakistan). Padmasambhava is said to have transmitted Vajrayana Buddhism to Tibet, Bhutan and neighboring countries in the 8th century AD. In those lands, he is better known as Guru Rinpoche “Precious Guru”. This site is dedicated to her figure. Padmasambhava is considered a manifestation of Buddha also known as Guru Rinpoche. He was a tantric Buddhist master born in India and he played a fundamental role in bringing Vajrayana Buddhism to Tibet in the eighth century. Padmasambhava is also the founder of the Nyingma school, the oldest of the four major traditions of Tibetan Buddhism.

The legend says that he secretly taught Tantra to, the princess of Rewalsar kingdom. When the king found out he tried to burn him alive, but Padmasambhava just sat in meditation and didn’t burn. Astonished by the miracle the king offered him both princess Mandarava and his kingdom. Padmasambhava left with Mandarava and went to Nepal to practice secret tantric rituals. During this time they had a vision of Buddha Amitayus and achieved a special spiritual manifestation called “rainbow body”. Both Mandarava and Padmasambhava’s other main consort, Yeshe Tsogyal reached Buddhahood, in fact, Guru Rinpoche is often portrayed between Mandarava, on his right, and Yeshe Tsogyal on his left.

Normally, Guru Rimpoche is depicted in his more traditional representation seated in royal posture holding a vajra in his right hand while his left hand holds a skull-cup containing a vase filled with the nectar of longevity and wisdom.