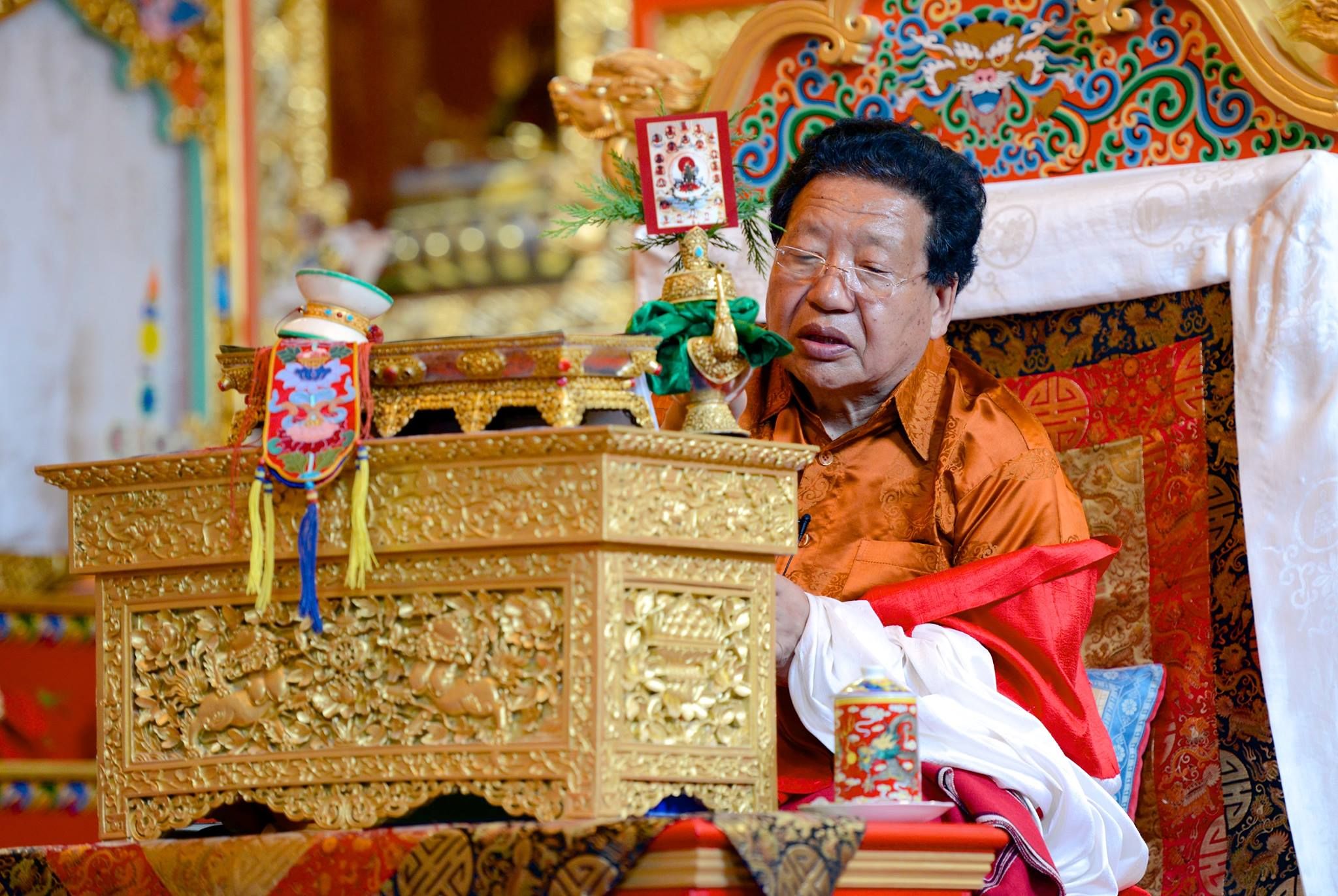 Choje Akong Tulku Rinpoche was a unique figure in the recent history of Buddhism.  Along with Chogyam Trungpa, he founded Kagyu Samye Ling in Scotland, the first Tibetan Buddhist monastery in the West.  When Trungpa Rinpoche left for America it was Akong Rinpoche who oversaw the construction of the temple and monastic complex at Samye Ling which has grown into one of the foremost Centres of Buddhist study and practice in Europe.

He was born in 1939, near Riwoche in Kham, Eastern Tibet. At the age of two, he was discovered by the search party seeking the reincarnation of the first Akong, Abbot of Dolma Lhakang monastery near Chamdo.

The search party was following instructions given by the 16th Karmapa. Following Akong’s death, Rumtek Monastery issued a statement clarifying his status as Rinpoche. According to the statement, Akong was a tulku of a noted and respected ngagpa who had founded and developed the Dolma Lhakhang temple. There are no records of previous Akong Rinpoches, either as meditators or scholars. Akong was given the title of Chöjé Lama, a traditional title, by the 16th Karmapa in 1974 in recognition of Akong’s service in developing Samye Ling.

Transmission of the Kagyu lineage

At four he was taken to Dolma Lhakang to receive an education that included religion and traditional Tibetan medicine. When only a teenager he traveled, performing religious ceremonies and treating the ill. Later he went to the great monastic university of Sechen where he received the transmission of the Kagyu lineage from Sechen Kongtrul Rinpoche, one of two tulkus of the first Jamgon Kongtrul. He also received instruction from the 16th Karmapa, who also certified him as a teacher of Tibetan medicine.

In 1959, in the aftermath of that year’s Tibetan Rebellion, he fled to India at age 20. Of the 300 in his party, only 13 arrived successfully in India. They were so hungry after running out of food on the journey that they had to boil leather shoes and bags to make soup.

After spending time in refugee camps he was asked to teach at the Young Lamas Home School in Dalhousie, NW India. In 1963, a sponsor paid for Akong Rinpoche and Chögyam Trungpa Rinpoche to go to Oxford to learn English. As only Trungpa had a bursary, Akong worked as a hospital orderly in the Radcliffe Infirmary in order to support himself, Trungpa and Lama Chime Tulku Rinpoche.

Akong Rinpoche manifested all the qualities of a great Lama, not only through the direct and powerful teachings he delivered to his students but also through the inspirational example he set.  He lived his whole life working selflessly and tirelessly for the benefit of others, willingly tackling any job that needed doing, and was equally at home on the building site as in the office. Those who had the good fortune to work with him remember his unflagging energy, humor and the unwavering compassion he showed to all those who came to him for advice or instruction.

This compassion manifested in many ways.  As well as the monastery at Kagyu Samye Ling, a large number of smaller Samye Dzong Centres developed under his guidance and are now flourishing around the world.  In 1980 he established the humanitarian charity ROKPA which helps tens of thousands of people every year in Tibet, Nepal, Africa and Europe.  Through his immense knowledge of Tibetan medicine and his profound understanding of the mind, he also developed the Tara Therapy programme and the Lothlorien Centre, dedicated to improving both physical and mental well-being.

Akong Tulku Rinpoche is the person who provided the original inspiration for the development of Tara Rokpa Therapy. He was born and received his education as a Buddhist meditation master and doctor of traditional Tibetan Medicine in Eastern Tibet. By the age of 20, he had taken full charge of the spiritual, medical and practical needs of the monks, nuns, and laypeople under his care. Before leaving Tibet he was very involved with caring for the sick and dying both as a physician and spiritual guide. When the Chinese took over this area in 1959, he sought refuge initially in India and settled in Britain in the mid-1960s. He co-founded the Samye Ling Tibetan Centre with Chogyam Trungpa Rinpoche in the borders of Scotland in 1967.

The inspiration of Akong Rinpoche has been crucial to this project. His knowledge and understanding have led to innovative approaches which address the disconnectedness which is found in so many facets of contemporary life and culture and which is a contributing cause for people seeking the help of psychotherapists. Akong Rinpoche’s therapeutic approach has been drawn largely from the principles of Traditional Tibetan medicine which is an intrinsically holistic system which has never posited a split of mind from body. Akong Rinpoche continued his active engagement in the development of TRT until his death in October 2013.

Key to the TRT method which Akong Rinpoche introduced as crucial to this psychotherapy is the willingness to ‘face the situation’, whatever that may be. By not always trying to improve upon reality as one finds it, it is possible to see all sides of the situation including one’s own hidden strengths. Such ‘here and now’ ideas fit easily with the Western Systemic/Social and Personal Constructivist approaches which invite us to take responsibility for the way we construct our world together (Maturana and Varela).

Apart from his role as a spiritual leader and his contribution to psychotherapy and Tibetan Medicine, he was an outstanding humanitarian and co-founder of ROKPA INTERNATIONAL. His interests and activities included the following:

Restoring Environments through the application of sound ecological principles, such as re-introducing organic farming methods in the third world and preservation of all forms of life including endangered species of plants and animals. Preserving Traditional Cultures throughout the world. He was personally engaged in such preservation of culture in Tibet, Nepal and Southern Africa. Furthering Education In Tibet through founding and supporting schools focused on education of orphans and very poor children, especially in remote and nomadic areas. Establishing Tibetan medium curricula and teaching materials in areas where the written language had nearly died out. Preservation of Tibetan Medicine, its herbs and pharmacognosy as well as its textual and practice traditions. Feeding Hungry People through soup kitchens/greenhouse projects in Europe, Asia, and Africa.

In 1992, Akong Rinpoche was one of the main people to discover one of the two claimed reincarnations of the 16th Karmapa, Urgyen Drodul Trinley Dorje, and took him to two of the regents, Their Eminences Tai Situ Rinpoche and Goshir Gyaltsab Rinpoche responsible for locating the reincarnation.

Akong Rinpoche produced a book with his student Clive Holmes titled Taming the Tiger: Tibetan Teachings for Improving Daily Life, the book aims to help those seeking the truth about suffering and happiness. The first part deals with Buddhist teachings (and how they relate to life in the ‘Western world’), while the second part is devoted to exercises, meditations and relaxation techniques for body and mind, and includes exercises designed to provide a base of self-knowledge, mind-therapy, and self-healing used in therapy workshops and in the treatment of psychological problems.

In 2009, he gave a presentation on Tibetan medical treatments using mantras and prayers at the Seventh International Congress on Traditional Asian Medicine held in Bhutan. It is likely that he presented this at least partly in Tibetan, according to the Congress programme. Akong Rinpoche’s younger brother Lama Yeshe Losal Rinpoche has now taken over some of his duties as abbot of Samye Ling.

In spite of all he achieved, Akong Rinpoche was a man of genuine humility and quiet reserve.  Throughout his life, he sought no personal reward and his selfless example was an inspiration to people both within and beyond the Tibetan Buddhist community.  His tragic death in Chengdu, China on October 8th, 2013 was an immeasurable loss that is still felt by many today.

The Akong Memorial Foundation is dedicated to preserving and continuing his legacy and in particular his dream for the restoration of Tsawa Gang Dolma Lhakang Monastery, his Seat in Tibet.

He was a British citizen and  raised a family in Dumfries, Scotland

Some Quotes of Akong Tulku Rinpoche

Only the impossible is worth doing.

“My wish is to benefit people in whatever way possible. That is what I do. I have no idea of my work ever finishing. It is an ongoing situation. In this life, when one thing finishes another one begins, so there is constant activity. There is no end.”

“We are not alone: everything is interrelated, and compassion is the essential link between all beings.”

The Buddhist principle is to be everybody’s friend, not to have any enemy.

Freedom is not something you look for outside of yourself. Freedom is within you.

This beautiful thangka is a hand painted by the artist of Bhaktapur Nepal. This Thangka is painted on handmade cotton canvas, Painted using natural color in a traditional Tibetan thangka color.
Buy Guhyasamaja Thangka Online