The Journey of Buddhism from Mongolia to the Himalayas

The Journey of Buddhism from Mongolia to the Himalayas

Buddhism in Tibet started in the sixth century. It was transmitted by the great Buddhist teacher of India for the next eight years. Tibetan Buddhism begins with Bon. The Bon religion of Tibet was animistic and shamanistic, and elements of it live on today, to one degree or another, in Tibetan Buddhism.

Introduction of Buddhism In Tibet

When Buddhism was introduced into Tibet in the seventh century under King Songtsen Gampo, it was apparently centered in the royal court and did not, at first, put down deep roots.

Almost a century passed until it found favor again under King Trisong Detsen, who with the aid of Padmasambhava strengthened its position. But even after that “first diffusion,” the new religion lost ground, and it was not until the “second diffusion” of Buddhism in the ninth and tenth centuries that it became firmly and finally established as the majority religion of Tibet.

It never recovered from official persecution that continues to this day. In India, Muslim invaders began centuries of persecution that, by the fifteenth century, all but destroyed Buddhism in its homeland. Tibet remained the great repository of Buddhist tradition until the Chinese invasion of 1959.

Due to the efforts of the Dalai Lama, and the benign patronage of the modern Indian nation, the great monastic universities, and institutions of Buddhism have now been re-established in their ancient homeland of India.

Religion permeates all aspects of daily life for the average Tibetan. Typical Tibetan families engage in religious observances at the family shrine, and prayers are recited throughout the day. Even ordinary people go on retreats for meditation and long pilgrimages to distant holy places, such as the seat of Avalokiteshvara (the Bodhisattva of Compassion, who is manifested by the Dalai Lamas of Tibet), formerly the Potala in Lhasa, now in Dharamsala, India, where the current Dalai Lama lives. Religious education begins at an early age.

Children’s heroes are the Buddha and the great bodhisattvas such as Avalokiteshvara and Manjushri, and the great saints like Tsongkhapa, Padmasambhava, Milarepa, Sakya Pandita, and Ra Lotsawa Dorje Drak. Many fascinating stories, filled with magic and adventure, tell of powerful holy men pitting themselves against demons, evil monsters, and wicked kings. Tibetans adhere closely to Buddhism, and many also honor the indigenous Bön religion that was strongly influenced and ultimately transformed by Buddhism.

Through his immense efforts in spreading Buddha’s lineage in the Land of Snows, the Kadam school of Tibetan Buddhism was eventually founded by his heart disciple, Dromtonpa.

Atisha also composed his seminal masterpiece, the Bodhipathapradipa or Lamp for the Path to Enlightenment, which lay the foundations for centuries of study, contemplation, attainments, and realizations based on this graded approach to the Buddha’s 84,000 teachings. It would also become the backbone of the Kadampa and later Gelugpa traditions of Tibetan Buddhism.

The story of his life continues to inspire many Buddhists to persevere in their spiritual journeys more than nine centuries after his death.

During the reign of King Trisong Detsen, which began about 755 CE, Buddhism became the official religion of the Tibetan people. The King also invited famous Buddhist teachers such as Shantarakshita and Padmasambhava to Tibet.

Padmasambhava, remembered by Tibetans as Guru Rinpoche (“Precious Master”), was an Indian master of tantra whose influence on the development of Tibetan Buddhism is incalculable. He is credited with building Samye, the first monastery in Tibet, in the late 8th century.

Nyingma, one of the four major schools of Tibetan Buddhism, claims Guru Rinpoche as its patriarch. According to legend, when Guru Rinpoche arrived in Tibet he pacified the Bon demons and made them protectors of the Dharma.

In 836 King Tri Ralpachen, a supporter of Buddhism died. His half-brother Langdarma became the new King of Tibet. Langdarma suppressed Buddhism and re-established Bon as the official religion of Tibet. In 842, Langdarma was assassinated by a Buddhist monk. Rule of Tibet was divided between Langdarma’s two sons. However, in the centuries that followed Tibet disintegrated into many small kingdoms.

While Tibet was plunged into chaos, there were developments in India that would be keenly important to Tibetan Buddhism. The Indian sage Tilopa (989-1069) developed a system of meditation and practice called Mahamudra.

Mahamudra is, very simply, a methodology for understanding the intimate relationship between mind and reality. Tilopa transmitted the teachings of Mahamudra to his disciple, another Indian sage named Naropa (1016-1100).

Marpa Chokyi Lodro (1012-1097) was a Tibetan who traveled to India and studied with Naropa. After years of study, Marpa has declared a dharma heir of Naropa.

He returned to Tibet, bringing with him Buddhist scriptures in Sanskrit that Marpa translated into Tibetan. Hence, is he called “Marpa the Translator.”Marpa’s most famous student was Milarepa (1040-1123), who is remembered especially for his beautiful songs and poems. One of Milarepa’s students, Gampopa (1079-1153), founded the Kagyu school, one of the four major schools of Tibetan Buddhism.

The great Indian scholar Dipamkara Shrijnana Atisha (ca. 980-1052) came to Tibet by invitation of King Jangchubwo. At the request of the King, Atisha wrote a book for the king’s subjects called Byang-chub lam-gyi sgron-ma, or “Lamp to the Path of Enlightenment.”

Although Tibet was still politically fragmented, Atisha’s arrival in Tibet in 1042 marked the beginning of what is called the “Second Dissemination” of Buddhism in Tibet. Through Atisha’s teachings and writings, Buddhism once again became the main religion of the people of Tibet.

In 1207, Mongol armies invaded and occupied Tibet. In 1244, Sakya Pandita Kunga Gyeltsen (1182-1251), a Sakya master was invited to Mongolia by Godan Khan, grandson of Genghis Khan. Through Sakya Pandita’s teachings, Godon Khan became a Buddhist. In 1249, Sakya Pandita was appointed Viceroy of Tibet by the Mongols.

In 1253, Phagba (1235-1280) succeeded Sakya Pandita at the Mongol court. Phagba became a religious teacher to Godan Khan’s famous successor, Kublai Khan. In 1260, Kublai Khan named Phagpa the Imperial Preceptor of Tibet. Tibet would be ruled by a succession of Sakya lamas until 1358 when central Tibet came under the control of the Kagyu sect.

The third head lama of the Gelug school, Sonam Gyatso (1543-1588) converted the Mongol leader Altan Khan to Buddhism. It is commonly believed that Altan Khan originated the title Dalai Lama, meaning “Ocean of Wisdom,” in 1578 to give to Sonam Gyatso. Others point out that since gyatso is Tibetan for “ocean,” the title “Dalai Lama” simply might have been a Mongol translation of Sonam Gyatso’s name—Lama Gyatso.

In any event, “Dalai Lama” became the title of the highest-ranking lama of the Gelug school. Since Sonam Gyatso was the third lama in that lineage, he became the 3rd Dalai Lama. The first two Dalai Lamas received the title posthumously.

It was the 5th Dalai Lama, Lobsang Gyatso (1617-1682), who first became ruler of all Tibet. The “Great Fifth” formed a military alliance with the Mongol leader Gushri Khan. When two other Mongol chiefs and the ruler of Kang, an ancient kingdom of central Asia, invaded Tibet, Gushri Khan routed them and declared himself king of Tibet. In 1642, Gushri Khan recognized the 5th Dalai Lama as the spiritual and temporal leader of Tibet.

The succeeding Dalai Lamas and their regents remained the chief administrators of Tibet until the invasion of Tibet by China in 1950 and the exile of the 14th Dalai Lamain 1959. 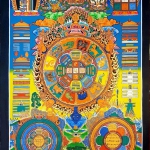