The Buddha’s Way of Virtue 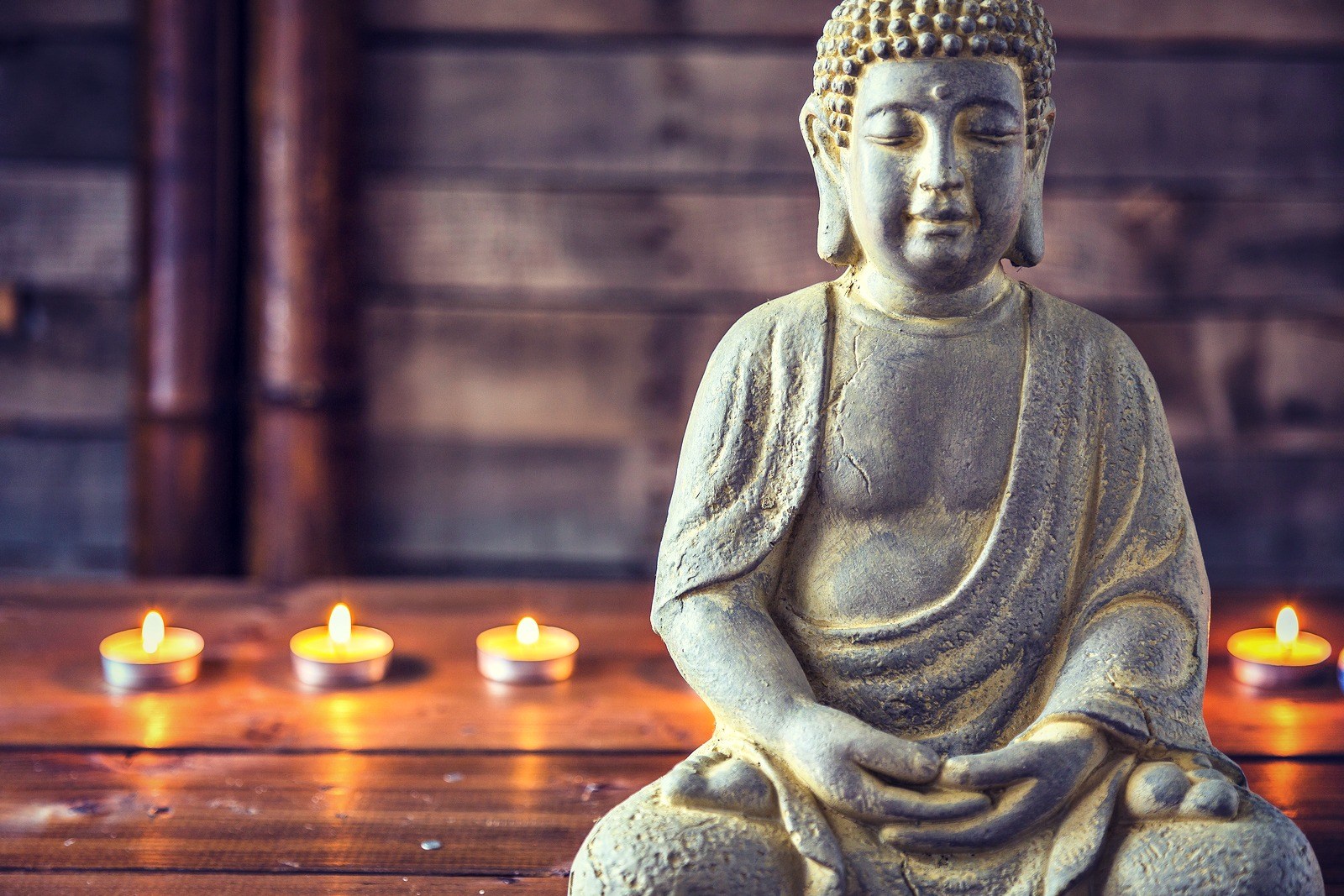 The Buddha’s Way of Virtue

The Dhammapada was accepted at the Council of Asoka in 240 B.C. as a collection of the sayings of Gautama, yet it was not put into writing until some generations had passed, and probably contains accretions of later date.

However that may be, there is no doubt that it breathes the very spirit of the Teacher, and it has always been used in Buddhist lands as a handbook of “devotion” or meditation, in whose solemn precepts men hear the voice of Sakyamuni summoning them to the life of contemplation, of strenuous mind-culture. The world, it tells them, is without permanence or purpose, other than that of expiation; the body is “a nest of disease” and the seat of “desire”; the mind itself is subject to decay, and capricious, easily led away after false pursuits.

Yet here, in the mind of man, lies his hope of salvation: he may make it a strong tower of defense. Though the world is out of gear, yet, like the Stoic, he may build within himself a kingdom and be at peace.

And so the call to “play the man” rings out with sturdy confidence. All men may attain, if they will, to happiness and serenity, for, with a modern Stoic, the Buddhist proclaims:

“I am the master of my fate; I am the captain of my soul.”

Gautama then was no thoroughgoing pessimist; that such a nature was pessimistic at all is due to the age in which he lived. It was the “sub-conscious mind” of his nation, and not his own brave spirit, that shut him into the belief in a ceaseless flux of “becoming,” a weary round of pain and retribution. For, by the sixth century B.C., India had passed from the sunny paganism of the Rig Veda into a more thoughtful and more gloomy phase of her religious development.

There were not wanting heroic spirits who offered a way of escape, urging men to plunge into asceticism or to court the mystic trance. These were the religious leaders of the day, at whose feet Gautama sat. Others, the great majority, were not ready for such heroic measures. They tried to square the gods, and to live unmolested, or to forget all in the pleasures of sense or the more subtle joys of the intellect.

To Gautama, all alike seemed “to follow wandering fires.” How degrading this thraldom to immoral and capricious gods! How empty and unsatisfying this mysticism when shorn of all ethical content! Which is more to be pitied, the grasping priest or the foolish worshipper? Which more deluded, the worldling or the devotee?

For all classes, the Buddha has the same message: the great reality is a character; all else are shadows not worth pursuing, for none of them strengthens moral fiber, and all alike are tainted with “desire.”

Like Socrates, he saw in himself a physician of the soul, and at times he resorted to surgery to “stab the spirit broad awake,” to call men from superstition on the one hand and materialism on the other. With Epictetus, he would have said, “A philosopher’s school, my friends, is a surgery, on leaving which you look to have felt, not pleasure but pain.”

Men needed above all things a moral tonic; there lies the secret at once of his stoicism and his agnosticism; luxury here, a barren mysticism there—these were sapping men’s strength, and all the energy they could command was needed in the fight for the character. They must strive and agonize to “cut out desire,” to push their way “against the stream,” to cross life’s stormy “ocean” and reach the haven of peace. And they must do it alone, not trusting to priest, or sacrifice, or the help of Heaven.

For this insistence upon morality to the exclusion of “religion” Gautama is often labeled “atheist.” Nothing could be more unfair: agnostic he may have been or seemed to be, but he was no irreligious spirit: the man who scoffs at the “other world” he condemns in uncompromising terms, and Ethics so lofty as this “Way of Virtue” never emanated from any but a reverent spirit. It is one of the puzzles of Psychology that so pure a soul ever stopped short at Ethics; yet we must remember that he was a reformer, that reformers are apt to be one-sided, and that during long and painful years he had suffered at the hands of a false “religiosity”; the iron had entered into his soul.

“If Buddhists admit neither judge nor creator,” says Professor de la Vallee Poussin, “at least they recognize a sovereign and infallible justice—a justice of wonderful insight and adaptability, however mechanically it acts… In my opinion, it is a calumny to accuse Buddhists of atheism: they have, at any rate, taken full cognizance of one of the aspects of the divine.”

Gautama believed above all things in a moral order, which, if it is inexorable, is also too righteous to yield to sacrificial bribes:

“Not in the sky, nor in mid-ocean, nor in mountain-cave, can one find sanctuary from his sin… Often do men in terror seek sanctuary in mountains and in jungles, by sacred groves or trees: in them, there is no safe sanctuary.”

So too the Psalmist cries, “Whither shall I flee from Thy presence? If I ascend into heaven, Thou art there: if I go down to hell, Thou art there also.”

Like the Hebrew prophet, too, he strikes a note of strenuous endeavor, of profound dissatisfaction with the actual, and of aspiration after the ideal: unlike the Hebrew and the Christian, he sees in the actual no promise of the ideal. His “way of salvation” is therefore monastic; men are to leave the world if they would escape suffering and be truly happy: the layman may one day attain the far-off goal, but for him remains a long and weary pilgrimage, many revolutions of the wheel of existence.

It is to Bhikkhus then that these stanzas are in the main addressed. They are comments made by the Teacher to his disciples as occasion arose, and to study them in a sympathetic spirit we of the West must for a time forget our impatience with “cloistered virtue.” The saintly life in the world is no doubt a truer ideal than the saintly life out of it, yet saintliness of any type is not to be despised.

The Buddhist holds that in contemplative activity a man may best serve the world: is it not true that “we need reservoirs of every kind of excellence”? We read in the Dhammapada of the fragrance of holy deeds which pervades the high heavens, and of the light that such a life may cast athwart a dark world. The “religious” is more to be envied than kings or even gods, and more fruitful.

“Good is kingship of the earth; Good attaining heavenly birth: World-conquest’s good, but better far The fruits of true conversion are.”

These fruits are “self-reverence, self-knowledge, self-control”; self-culture is, in the end, the truest benevolence, says the Buddhist, and the deepest wisdom. That “wisdom” of which we shall hear so much in the following pages, is “a certain over-mastering principle or power, that lays hold, primarily indeed, of the intellect, but through the intellect of the entire personality, moulding and disciplining the will and the emotions into absolute unison with itself, a principle from which courage, temperance, justice, and every other virtue inevitably flow.”

“A man is not wise by much speaking…He is the wise man who is forgiving, kindly, and without fear.” For Gautama sees in ignorance not merely a calamity, but also a moral fault; he agrees with the Darwinians in recognising in man the ape and the tiger, but adds, with Dr. Creighton, that “when the ape and the tiger go, there still remains the donkey, a far more formidable beast.”

Mōha, infatuation, and Avijja, ignorance, are everywhere, and “Ignorance is the greatest of taints, more destructive than avarice and impurity.”

He himself was the “enlightened,” “the seer” who by insight had won emancipation, and he teaches that if men will only see things as they are, then they cannot but eschew evil and do good; but the great multitude is fools and blind. To give them new ideas and to lift the veil off their darkened hearts—this was the work of Gautama, and in attempting it he revealed a sturdy optimism and a magnetic personality which went far to energize his ideal. These qualities place him high amongst ethical teachers.

And what shall we say of his system as religion? The student of these pages will find himself in a moonlit world, beautiful yet cold:

“A common greyness silvers everything.” Here is no “sunset touch,” no mystic hint of Him “whose dwelling is the light of setting suns”; our hearts are not stirred as we read by any assurance of the reality of the Unseen.

Mysticism, in short, finds no entrance here—a fact which makes the Dhammapada almost unique amongst the great things of religious literature. Instead, we find “common sense” supreme, mathematical, and a little cold, yet confident of itself and of its firm grasp of all the factors in life’s equation. Instead of passion and romance, we shall find self-mastery and a half-humorous sweet reasonableness. Everywhere Law is at work, and there is nothing besides: no hint of whence law emanates, of how it works, or why. These are questions alike unprofitable and unanswerable. It is enough, the Buddha would say, that the world makes for righteousness, that sin is punished, and that goodness does not go unrewarded. “As you sow, so shall you reap.” Happiness is the bloom upon virtue; sorrow is the blight upon sin: and this is the ultimate motive to the strenuous life.

“Is such a world worthwhile?” asks full-blooded Youth. “And is a calm like this enough?” “The world,” comes the serene answer, “is worth nothing at all: it has no reality and no purpose, save that of retribution: man’s only happiness is to escape. The calm and peaceful frame of mind is the only happy one, the promise of a Rest hereafter, ineffable and placid: to this man can and must attain.”