Initiation after Entering into Mandala 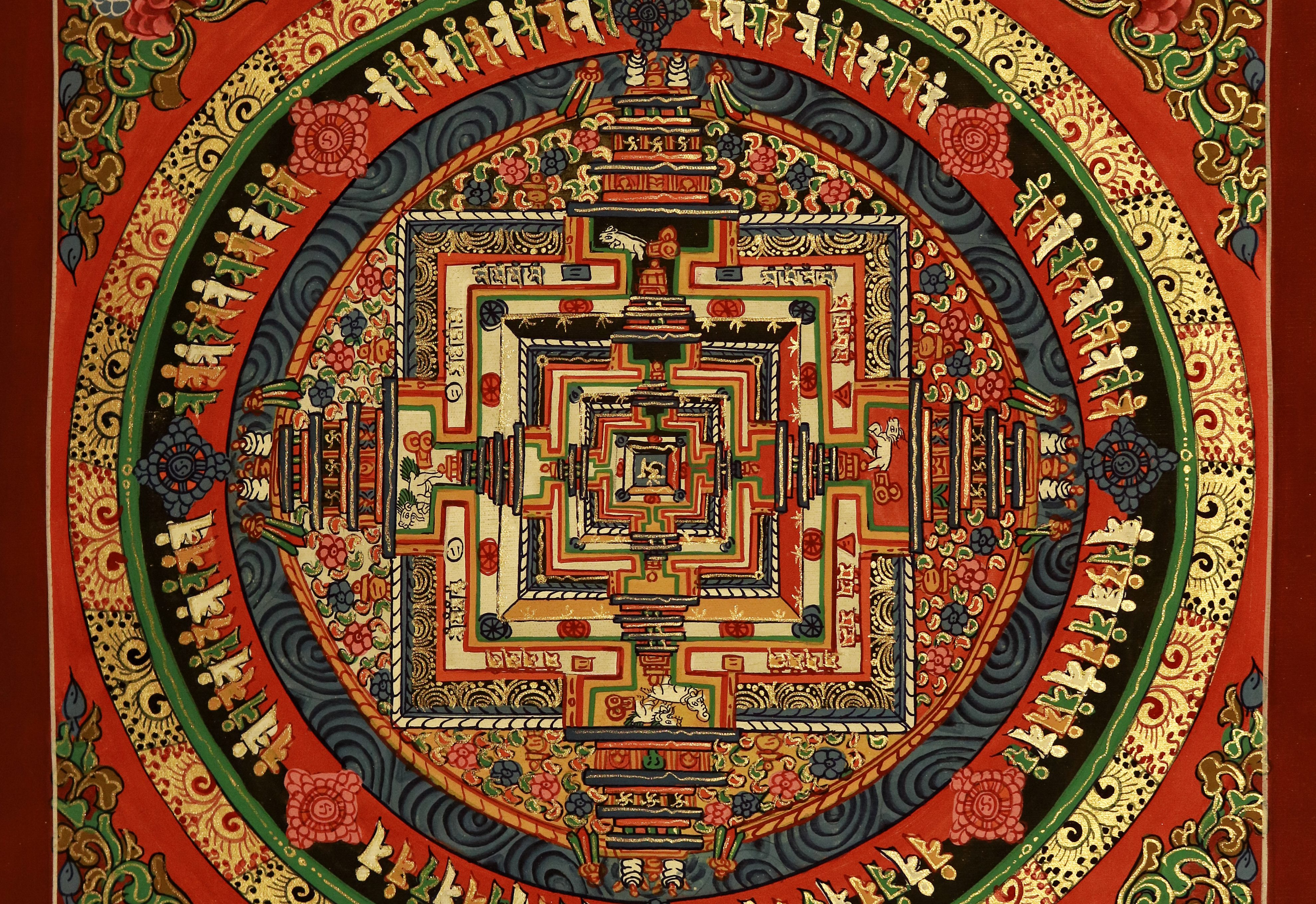 Initiation after Entering into Mandala

Actually Granting Initiation through Entry into the Mandala has three parts:

Granting initiations according to the pattern of childhood

This also has three parts;

The rites of the seven initiations

Think that inauspiciousness is cleared away by various cleansing substances such as burning mustard seed, water and so forth, and by saying the six syllable mantra (Om ah hum ho ham ksha) seven times- Then the ablution is performed. Uttering the mantra of the principal deity offerings are made to the disciples of perfume applied at the heart, flowers placed on the head and so forth. An oblation of water is made in front, lamps offered to the eyes, incense is burned with butter.

There are seven divisions in the giving of the seven initiations.

The lama holding a Vajra in his right-hand leads the disciples by the left hand and circumambulating they come to the northern gate. The disciples sit on the initiation seat, they offer a Mandala to the lama inseparable from the Vajra body of Kalachakra to purify the body. They make a supplication to the lama to give the initiations through the ten seed syllables of the ten vases, the five seed syllables of the five Mothers and the five Vajra Skyfarers and the Vajra vase filled with nectar. The disciples should repeat the supplication three times while reflecting on its meaning.

By singing the action mantra and sprinkling water from the conch obstructions are eliminated.

The disciples are drawn into the mouth of the lama in the form of the principal deity Vajra Body. Passing through his body and melting into drops, they are generated into the deity Vajra Body with consort. The wisdom being dissolves into them. The disciples should imagine that all the male and female Buddhas and Bodhisattvas are invited, melt and enter the body of the lama and thereby grant the initiation of the mind of enlightenment. By receiving this initiation of mind of enlightenment the disciples generate the entity of the internal initiation in their mental continuums. Imagining that they emerge from the womb of the consort they are set once more on the initiation seat. This initiation corresponds to purifying the basis of the physical aggregates and constituents.

Water from the conch purifies the disciples’ constituents, space, air, water, fire, and earth. The water, the cleaning substance, and the internal constituents are generated into the commitment beings, the five mothers, who are themselves the factors for purifying the five constituents. By dissolving into them and becoming inseparable from them, the wisdom beings confer the initiation and impress the seal (of the lineage) on the disciples, who are now inseparable from the water in the vases.

Inviting the initiation deities, the disciples make supplication to the deities (the five mothers) in the Mandala, saying, ‘Just as Vajradhara bestowed initiation, the source of good qualities, for the sake of wandering beings, please also grant it to me.’ The invited deities generate an intention to bestow the initiation, the Bodhisattvas recite verses of auspiciousness, Rupavajra etc., make offerings of a rain of flowers and so forth, and male and female wrathful protectors dispel obstructions. The five mothers in the Mandala bestow the initiation with the water in the vase-the disciples must recall the meaning of the words- The disciples should imagine that when the lama makes the gesture of touching the water-filled conch to their five places, crown, shoulders, upper arms, thighs, and hips and sprinkles the water, their five places have been blessed.

Generating the disciples’ constituents and the water of the vases into deities, the granting of initiation by the five mothers and drinking the water is the collection of substances for the water initiation.

By drinking the water that the lama has touched to the disciples five places, the defilements of the five constituents of the body are cleared away. Through drinking it great bliss is experienced and the mind realizing the emptiness of that great bliss, generates a union of great bliss and emptiness in the mental continuum; this is the entity of the water initiation,

The initiation deities are withdrawn and the disciples’ five constituents dissolve into the five mothers. The disciples are offered twelve offering goddesses.

Corresponding to a mother’s washing her new-born child, this initiation clears away the defilements of the five constituents and transforms them into the nature of the five mothers. It authorizes the disciples to achieve feats and activities dependent on the five mothers during the path and leaves potencies to achieve the first ground as its result.

Light rays from the HUM at the heart of the lama inseparable from the principal deity invite the initiation deities such as male and female Buddhas with their sons and daughters, who fill the expanse of space.

Again making offerings of perfume and so forth, the disciples make supplication. The male and female Buddhas in the space in front generate the intention to grant the initiation, Bodhisattvas recite verses of auspiciousness, Rupavajra and so forth make offerings and a rain of flowers fall and male and female wrathful protectors dispel obstructions. The five

Buddhas who reside in the Mandala, are about to grant the initiation holding the crowns.

Then the Vajra master holding the crown in his hand touches and disciples’ five places and places the crown on their heads.

This corresponds to fastening a child’s hair on top of its head, it cleanses the defilements of the five aggregates. It authorizes disciples to achieve feats by way of the five Buddhas and leaves potencies of the five Buddhas in their mental continuums and gives the power to attain the second ground as its result.

(The purification of these two initiations. First, as the aggregates are initially formed in the womb, the two initiations in the sector of the northern face of the exalted body, cleanse physical defilements and establish the seed of the Vajra body in order to establish potencies, such that the impure constituents and aggregates, which are factors of the disciples’ own bodies, are cleansed of defilements as entities of the male and female Buddhas. These two initiations authorize disciples to achieve the feat of a Vajra body.)

Again the Vajra master leads the disciples by the Vajra in his hand, circumambulating the Mandala to the right to the southern door, where he places them on the initiation seat.

A Mandala is offered to the lama inseparable from the Vajra speech of Kalachakra in order to receive the silk ribbon initiation that cleanses the defilements of the ten winds. The disciples make the mantra supplication three times mindful of its meaning. ‘May the ten goddesses of the perfections tie the silk ribbon on me.’ The disciples are generated into the Vajra Speech of Kalachakra and granted the inner initiation. They should visualize according to lama’s explanation that the ten winds and the silk ribbons arc generated into the ten consorts.

The Vajra master touches the disciples’ five places with the silk ribbon and then affixes it to their brows, by the power of which nectar descends, cleansing all defilements of the ten winds. The disciples should imagine that they have now generated great bliss and emptiness, which is the nature of the silk ribbon initiation.

The meaning of the silk ribbon initiation

This corresponds to the piercing of a child’s ears and puffing on ornaments. It clears away the defilements of the ten winds and makes them serviceable. It leaves potencies for the ten perfections in the disciples’ continuums and grants them the ability to attain the third ground as its result.

The Vajra and Bell Initiation

The disciples make a Mandala offering in order to receive the initiation of the Vajra and bell. ‘Please may Vajrasattva together with his wisdom-consort grant the Vajra and bell initiation, that has the nature of consciousness and exalted wisdom and the essence of compassion and wisdom, (and place them) in my right and other hands.’ The disciples make the mantra supplication while recalling what it means. They should imagine that their right and left channels are generated by the principal deity and his consort.

This corresponds, to a child’s laughing and talking. It clears away the defilements of the right and left channels. It leaves potencies for binding the winds of the right and left channels in the central channel and establishes seeds For the exalted mind, the great bliss and exalted speech in all forms. It also bestows the capacity to purify the internal sun and moon and to attain the fourth ground.

Again circumambulating to the right the disciples are led to the eastern door and placed on the initiation seat. A Mandala is offered to the lama inseparable from the Vajra mind of Kalachakra in order to receive the conduct initiation that clears away defilements from the sense powers and objects. The disciples should make the mantra supplication three” times, mindful of what it means. ‘Please may all Bodhisattvas with their consorts grant me the Vajra conduct of thoroughly enjoying all desires at all times.’ The disciples are now generated into Vajra mind deities and granted the internal initiation. Objects of the disciples’ senses and the initiation substance, which is the Vajra thumb ring, are generated into Bodhisattvas and their consorts. This should be visualized according to the rite-

The initiation corresponds to the child’s enjoying the five attributes of the desire realm. Just as the objects of the sense powers are generated into deities and blessed, the disciples are authorized to achieve the feats of the male and female Bodhisattvas and enjoy the attributes of the desire realm by understanding their nature, which is bliss and emptiness. It also gives the capacity to achieve the Vajra sense powers and their sources, as well as attain the fifth ground as its result.

A Mandala is offered to the lama in order to receive the name initiation that cleanses the faculty of action as well as activities. The disciples should make the mantra supplication three times mindful of what it means/May all the wrathful kings and their consorts grant me the name preceding the Vajra, which has the nature of entirely equal love, compassion, joy, and equanimity.’

From generating the disciples’ action faculties and the initiation substance into wrathful deities with their consorts up to the appended water ritual should be visualized according to the text of the ritual.

Receiving this initiation corresponds to the naming of a child. By clearing away the ordinary given name, it clears aw the defilements (leading to) birth in the lower realms. It cleanses the action faculties and their activities and authorizes disciples to achieve feats of the male and female wrathful deities and grants the capacity to overcome the four hindrances the four immeasurable wishes and attain the sixth ground.